In case you missed it, “Bloodshot,” “Grendel,” and “Snowpiercer” are all set to return during 2019, and BOOM! Box announced a new original graphic novel entitled “A Sparrow’s Roar.” 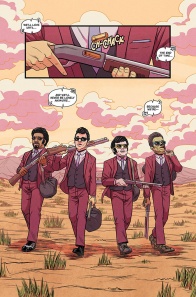 – The Hollywood Reporter announced Action Lab’s next comic, a romantic action-comedy entitled “Going to the Chapel.” The Reporter article sells the series as “Die Hard at a wedding” and offers an exclusive eight-page preview. The series will be written by David Pepose (“Spencer and Locke”) and illustrated by Gavin Guidry and Liz Kramer, and will debut in the Fall.

– Bleeding Cool shared a first look at “Canto,” a new all-ages series coming from IDW this June. The book follows the titular Canto, a tiny knight who has a clock instead of heart, as he seeks to save a fellow clockwork girl. “Canto” will be written by David M. Booher (“Powerless”) and feature art from Drew Zucker, Vittorio Astone, and Deron Bennett.

– Bleeding Cool also reported on Legendary Comics’s upcoming “Detective Pikachu” adaptation, which will follow the plot of the soon-to-be-released Pokémon film. The comic, written by Brian Buccellato with art by Nelson Dániel, will hit stores sometime after the movie’s May 10 premiere.

– The Batman vs. Teenage Mutant Ninja Turtles animated feature has an official release date, according to Newsarama. The movie will arrive on digital May 14, and on 4K Ultra HD and Blu-ray June 4.

– The 2019 BAFTA Game Awards nominations contained more accolades for Marvel’s Spider-Man. The game earned nominations for Artistic Achievement, Audio Achievement, and Narrative awards. The winners will be announced on April 4.

– “Dead Ahead” co-writer Melvin Smith has settled his lawsuit against the folks behind Fear the Walking Dead, according to Deadline. The details of the settlement are confidential, but Deadline reports that Smith “is pleased with the outcome.”

– An expansion pack for the video game Attack on Titan 2 will hit America on July 5, according to Anime News Network. Attack on Titan 2: Final Battle will be available for PS4, Nintendo Switch, Xbox One, and PC.

– Variety reports that L.A. Confidential screenwriter Brian Helgeland is set to direct Netflix’s Button Man, which is an adaptation of the “2000 AD” strip by John Wagner and Arthur Ranson. Begun in 1992, the comic followed Harry Exton, an ex-soldier and “Button Man,” a hired killer pitted against others in an underground sport. No production date has been set.

– And finally, ComicBook.com announced that Marvel movie directors Anthony and Joe Russo will be honored as Directors of the Year at this year’s CinemaCon in Las Vegas. The event takes place April 1 to 4.

Welcome back to The Rundown, our daily breakdown on comic news stories we missed from the previous day. Have a link to share? Email our team at rundown@multiversitycomics.com.– Mike Mignola has announced via Twitter that he is going to start an eBay auction of his sketches, with 100% of the proceeds going to Jose Andres’s […]

Welcome back to The Rundown, our daily breakdown on comic news stories we missed from the previous day. Have a link to share? Email our team at rundown@multiversitycomics.com.In case you missed it, Dark Horse announced “Minecraft Volume 2” and “Stranger Things: The Bully” for October, and Diamond announced the winners for the 2019 Gem Awards.– […]