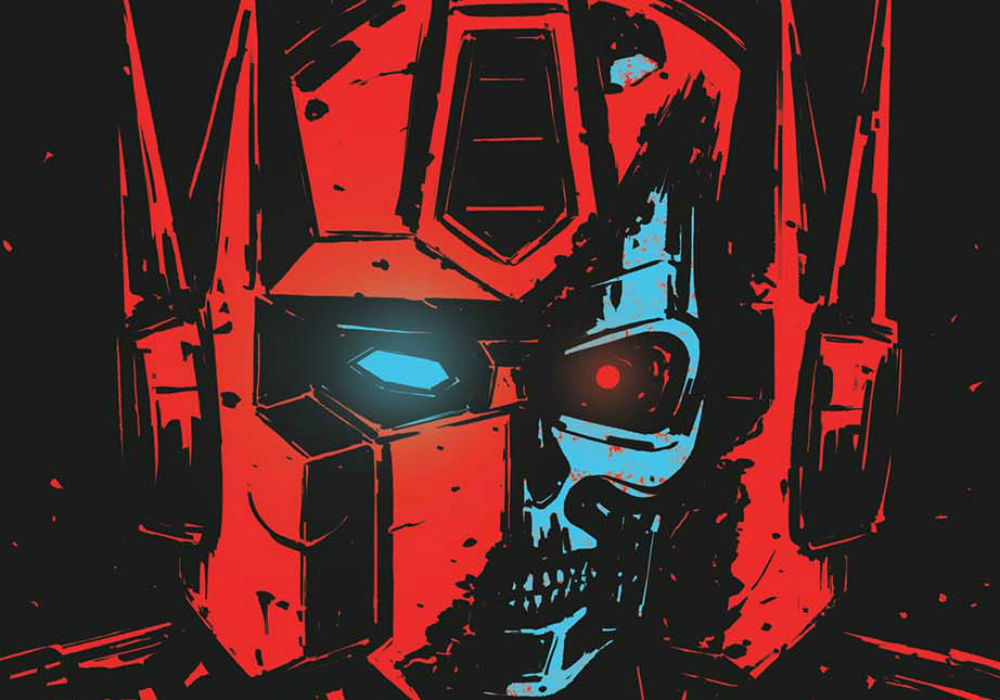 What happens when you merge two different robot-based science fiction franchises debuting in the 1980s, then throw them back in time to that very decade? Check out the result in the new crossover between Transformers and Terminator! 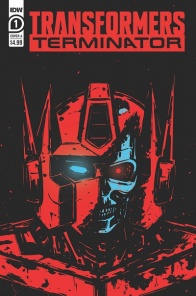 It’s Skynet vs. Cybertron in a crossover for the ages!

1984: When a deadly race of machines emerge from another time, will a robotic guardian be able to protect the Earth from a dire future… or will the T-800 fail in his mission to prevent the world from becoming a plaything to the Decepticons?

Mixing together Transformers and Terminator is, on the surface, such a perfect idea for them that readers may be left wondering how exactly this kind of crossover has not been done before. A species of alien robots crossing paths with a terrestrial artificial intelligence and its smaller army of hunter-killer androids is a match made in cybernetic heaven if there ever was one. However, like any comic, “Transformers vs. Terminator” #1 relies upon its creative team to tell a compelling story. When it comes to the writing, how does the script written by David Mariotte and John Barber, telling a story by them and Tom Waltz, merge the two titans of science fiction into one cohesive whole?

From the outset, one thing is absolutely clear about “Transformers vs. Terminator” #1: so far as the story is concerned, there is no crossover, but instead the two franchises have always been one from the very beginning. Opening up with a wildly different take on Skynet in the dark future of Trminator‘s chronology that mixes it with an invasion of the Decepticons, there is no need within the scope of “Transformers” or “Terminator” to give any explanation as to why the two are colliding, instead taking as a given that they are. By sidestepping that entire complication, Mariotte and Barber are able to dive right into what readers came for: a fun story merging the two across time, along with some surprising black comedy along the way to spice up the action and explosions.

In this new timeline, Mariotte and Barber tell a unique story that branches out into completely new directions, primarily based around Terminator so far. With the insertion of extraterrestrial invaders, Skynet, typically the antagonistic force of Terminator, is portrayed in a relatively positive light. While they may still be villains to humanity, the android “Terminators” under Skynet’s rule are still terrestrial in origin, and so are bent on defending their rule from an invading force. As if to expand upon this difference, while the film franchise’s protagonist Sarah Connor is present, she apparently has a very different role than she does in most other Terminator fiction.

If there is one failing, it is in Mariotte and Barber’s treatment of the Decepticons, the “Transformers” side of the “Transformers vs. Terminator” #1 storyline. While they are the impetus for quite a lot of change, the story only really identifies them as the Cybertronian invaders and gives some names of particular Decepticons. On the whole, in contrast to Skynet, the Decepticons still need a lot of time to develop their side of the story beyond their seemingly generic “alien invaders” routine that just happens to be in the form of large robots.

Alex Milne, best known for his work on “Transformers” comics, brings his skill with illustrating robotic entities to the fore. While the styles of Cybertronian and Skynet-based androids are very different, Milne manages to take the best of both worlds and create a very good merger that brings them both together. Especially important is his use of scale, as the titanic Decepticons face off against the relatively human-sized Terminators, with Milne’s result being a “David and Goliath” type of scenario that may even leave readers tempted to sympathize for the plight of the Terminator franchise’s most common antagonistic entity and its agents.

On another hand, Milne’s work with “Transformers” is readily evident in his use of fast-paced, chaotic, or otherwise dangerous scenes, from battles to driving down a road to a prelude to battle. Even with explosions and laser fire every which way, everything in “Transformers vs. Terminator” #1 is easily understandable and exhilarating, with any possible confusion merely coming from new elements to the crossover itself rather than any lack of clarity in the thick of the fighting.

However, Milne is even better when it comes to more subtle artwork, from facial features of human (or human-seeming) individuals to otherwise calm scenarios. Despite the serious characters, the variety of emotions shown on human figures allows for a plethora of emotional responses ranging from confusion to laughter, or from anger to fear. Even beyond those faces, other elements such as sight gags may cause the audience to laugh out loud from the sheer incongruity to elements around them.

While Milne’s artwork is well done, David Garcia Cruz’s colors truly bring it to life. Dark, muted coloring on the part of the Terminators contrasts against the more colorful Decepticons, showing how alien the latter are compared to the former in how their hues just do not fully fit in with their surroundings. A blank background against the silver endoskeleton and red eyes of a Terminator really help the shock of its appearance resonate with readers, making the revelation immediately after all the more interesting.

In the 1980s, Cruz’s colors are more varied, owing to the fact that the world has not truly dissembled to the degree it had in that future. The pink of Sarah Connor’s outfit and the variable hues across road trip help to imply freedom and individuality for humanity before their encroaching end, especially contrasted to the resident Terminator’s classic dark ensemble. Flashes of red help to provide a general tone of extreme violence, from warning lights to attacks. The best use of color, however, would have to be the aftermath of a Terminator’s hand being shot, with half of its face cloaked in shadow. The space behind the hand has a purely red eye, a coloration that is only hinted at in the pupil of the other eye, as if the robot inches from “tearing off” their human-like skin to show the android beneath with a very foreboding impression overall.

Final Verdict: 7.5– While the “Transformers” end of this crossover may seem lacking thus far, the effectiveness of this mash-up lies in its ability to create a completely new world by way of the two franchises colliding, from the intriguing story to the dynamic art and colors.