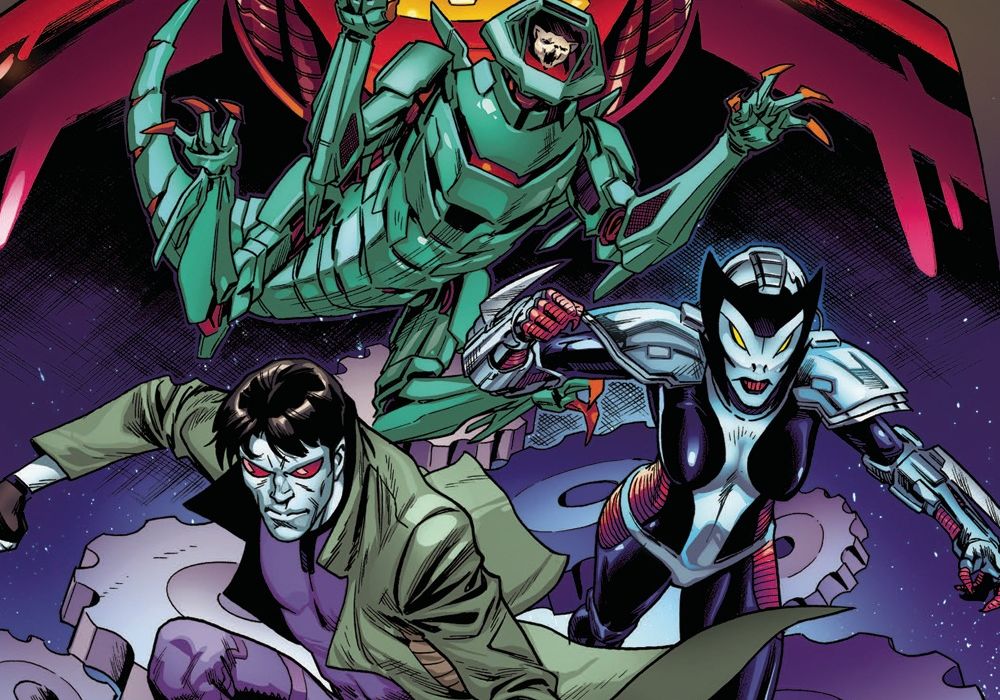 Spoilers for Machine Man 2020 #1-2 and the entire modern comic book Iron Man franchise ahead
Granted, these are spoilers that make themselves readily apparent in the beginning of “Iron Age 2020,” but for anyone who isn’t caught up with the most current Iron Man stories, or even Iron Man lore, this will be a pretty big spoiler. Also, this book brings a lot of older Marvel characters back into the spotlight, so some homework might be in order if you want to fully grasp what’s going on.

Tony Stark is dead. In fact, he has been dead for a pretty long time and has revealed to the world that he has been existing as an artificial intelligence occupying an artificial life form for quite some time.

Future implications for the Marvel Cinematic Universe aside, what’s happened now is that Tony’s adoptive brother and enemy Arno Stark (yes, that’s a thing) and his business partner Sunset Bain have seized all of the definitely dead Tony’s assets. Now, there’s a full blown robot uprising on everyone’s hands and “Iron Age” 2020 #1 is here to give us a snap shot into the big picture. 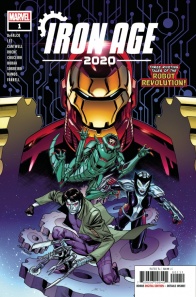 The Robot Revolution rages on! But as the fighting escalates and convictions are put to the test – is everyone committed to their cause or is there more going on than meets the eye? Don’t miss out on this collection of epic adventures from both sides of the conflict featuring Machine Man, Doctor Shapiro and Alkhema. From industry legend Tom DeFalco & Nick Roche, Christopher Cantwell & Matt Horak, Fonda Lee & Damian Couceiro!

Since this is basically an anthology title, the review for “Iron Age 2020” #1 is going to be three short reviews instead of one long one.

The first story in “Iron Age 2020” #1 is a story titled Roads Taken. It’s written by Tom Defalco with artwork by Nick Roche. The story follows several old Marvel characters who were actually resurrected and reworked by Defalco in the 1980’s. The first is named X-51 aka “Aaron” aka “Machine Man”, a human like robot who has decided to renounce humanity to lead his fellow artificial intelligences, and a group of underground tech specialists and fighters called The Wreckers who are in the process of invading a top secret laboratory run by Sunset Bain. Defalco does a good job writing dialogue that makes the robot cause relatable and sympathetic. Machine Man is a nuanced character who cares for the humans that he knows, but understands that his cause may force him to abandon that friendship. Unfortunately, while the writing for this story works, Nick Roche’s art doesn’t help enhance the story very well. Granted, Roche does a good job with portraying some very dynamic and high energy action scenes, but a high panel count and a Saturday morning cartoon look to the art doesn’t give the story the proper emotional weight it needs to really drive home the horrors that the robots are undergoing. It’s not bad, the art does a good job conveying the emotions of each of the characters, it’s just that the story could have probably benefited from more of a realistic and mature horror style.

While Road Taken did a decent job of making the robots feel sympathetic and the robots evil, the next story titled Robot of Conviction does the complete opposite. This story written by Fonda Lee with artwork by Damian Couceiro follows a group of robots who are tasked with guarding a top secret military base that is under attack by Alkema, who was basically a female version of the longtime Marvel villain Ultron created in the early 1990’s. Lee does a very good job laying the groundwork of the main conflict of the story with two robots who are forced to work with humans and long to join the robot rebellion, and when Alkema enters the picture Lee does a very good job portraying an insane robot with a literal god complex. As for the artwork, Couceiro has a cartoonish art style that is kind of similar to Nick Rouche’s from the previous story with a bit more realism added to it, but unlike the previous entry the artwork in Robot of Conviction is much better suited for this kind of story. Maybe it’s because of a smaller page count, which makes the story easier to follow. Maybe it’s because Couceiro is willing to show the effects of the horrible things Alkema is willing to do. Or maybe it’s because humans are naturally more sympathetic to us than robots, but no matter what, this is a story with plenty of emotional weight and much more relatable stakes.

The final story doesn’t deal with the morality of the upcoming human/robot war, but it does deal with the fallout of Arno and Bain buying out Tony Stark’s old company. It’s a story entitled Curiosity and shows the fate of one of Tony Stark’s most important employees, a hyper intelligent cat wearing an artificial intelligence collar who goes by the name of Doctor Shapiro. It seems that while Bain is interested in the technology that created Shapiro’s collar, he couldn’t care less about the cat. Writer Chris Cantwell does a good job holding back on the dialogue, allowing most of the story to play out in silence and without any gimmicks or forced exposition and is willing to step back and allow artist Matt Horak to tell most of the story through the art. Of all the art on display in “Iron Age 2020” #1, Horak’s art is the most realistic and when it is paired with Triona Farrell’s use of dark lighting and psychedelic color it creates a very large, and very scary, world that presents a challenge for a very small cat. Also, there is a hilarious sequence showing what the world must look like when cats go on a catnip bender.

At the end of the day “Iron Age 2020” #1 is a nice little anthology that offers a tiny glimpse into the every day lives of some of the smaller bit players in a much larger conflict. Neither humans nor robots are entirely evil, they all have their reasons for doing what they’re doing, but neither are they entirely sympathetic. There are heroes and monsters on both sides and it’s probably going to get a lot worse before it gets better.

Final Verdict: 8.5 – A well thought out and pretty nuanced look into both sides of the upcoming human/robot war. Also, cute cats.