Anytime readers get the insanely detailed and stylized work of Sean Gordon Murphy’s pencils there’s some sort of cause for celebration. In each project he tackles, Murphy goes all-out in terms of his art, rendering beautiful splash pages with striking composition and detail. However, the creator has recently been writing and now he’s set to tackle his very own Batman mini-series starring the Joker finding the light and becoming Batman. The premise behind the new story could go in a couple directions and surely bears some immediate potential, but will Murphy’s script match the craft and grandeur of his artistic contributions in the issue? 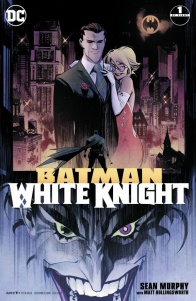 In a world where Batman has gone too far, The Joker must save Gotham City.

He’s been called a maniac, a killer and the “Clown Prince of Crime” but “white knight”? Never. Until now…

Set in a world where the Joker is cured of his insanity and homicidal tendencies, The Joker, now known as “Jack,” sets about trying to right his wrongs. First, he plans to reconcile with Harley Quinn, and then he’ll try to save the city from the one person who he thinks is truly Gotham City’s greatest villain: Batman!

Superstar writer and artist Sean Murphy (PUNK ROCK JESUS, THE WAKE) presents a seven-issue miniseries of a twisted Gotham City with a massive cast of heroes and villains that, at its heart, is a tragic story of a hero and a villain: Batman and The Joker. But which is the hero—and which the villain?

The first integral aspect to “Batman: White Knight” #1 is the incredible art. From the very first page, it’s clear this title has a knack for beautiful splash pages and an unbelievable sense of scale. Moving beyond the first page, readers are treated to wonderful composition and layouts with pages full of beautiful detail. The poses struck by each character convey lots of emotion held by body language and facial expressions. The action sequences in this book are fluid as well featuring figures drawn with fantastic clarity and awe. Murphy also makes each pose look really cool, drawing lots of extra lines on characters for ambiance and cloaking close-ups with darkness. Later on in the issue, the best splash pages are unveiled, showing the full scope and biggest chances Murphy can take with the narrative–he even takes one splash page and presents the inverse of it on the following page that is full of Batman easter eggs for eagle-eyed readers.

While everything about the art in this comic delivers, the quality of the writing is lacking in key places. The story starts out great as Murphy delivers a non-linear narrative here illustrating a twisted future for The Dark Knight which readers still haven’t caught up to at the end of the first issue. While this story may not be perfect, the ambition for the comic seems to be front-and-center and wild–but the book starts to falter in the huge fight scene after this sequence.

The characters in the story repeat phrases in the book about Batman taking his crusade on crime too far a mind-numbing amount of time. The phrase is ushered by Batgirl in the middle of a fight and then repeated by Batgirl and Nightwing only a few pages later. The glaring flaw in the book is the use of newscasters just a few pages later to instill the message Batman has gone way too far to the point of absolute absurdity. In a script just over 20-pages, this revelation didn’t need to be struck with so many lines of dialogue. Plenty of comics utilize a layer of subtext which ends up making readers feel more engaged in a narrative where they have to come to their own conclusions over time.

Murphy overwrites this story as well, loading the comic with needless dialogue and having characters state their entire philosophy when just mentioning how they feel about something would have worked better. The motivations of Joker change expediently fast in the issue, kind of showing him as someone who doesn’t really believe in much of anything. Murphy has an uphill battle to right with his protagonist’s characterization to just make his redemption arc feel earned in any sense of the word.

Readers may be disappointed to see Murphy wasn’t able to include any further information about the Clown Prince of Crime switching sides or how the One Year Later flash forward started to take place. The problematic and sudden change of heart for the Joker is going to need a lot of work in future installments as well. This debut is a mixed bag, featuring a few glaring errors which must be addressed and corrected before the end of mini-series.

There’s a lot to like about “Batman: White Knight” #1 and I think the only flaws of the book that are immediately present are those that come up after a more thorough examination of the text. This title is loaded with weird characterization, too much dialogue, and some telling but not showing. Furthermore, this issue only gives you the amount of plot in the solicitation and nothing more. Perhaps the mini-series isn’t the right outlet to tell this complicated story in but “Batman: White Knight” #1 still has the ambition and art to make it worth a read for any Batman fan curious about the title.

Final Verdict: 6.8 – “Batman: White Knight” #1 has a twisted sense of ambition and beautiful art but spins an underwhelming narrative.