Dynamite’s new police procedural is a solid debut that both embraces and subverts the tropes of its well-worn genre. 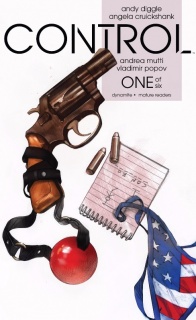 Detective-Sergeant Kate Burnham isn’t making any friends in the Washington DC Police Department. That makes her the perfect scapegoat when a routine homicide investigation threatens to blow open a criminal conspiracy that reaches to the upper echelons of the DC power elite. Kate makes it go away, or they make her go away. Cop or criminal, power is all about control, applied top-down from the penthouse elite to the hustlers on the street. But what happens when the street pushes back…?

Rarely do you come across a book that knows exactly what it wants to be from its début issue. But from the very first few pages the grim, gritty, and weighty world of “Control” seems to spring fully formed and ready to drag the reader along for the ride. The reason for this is Cruickshank and Diggle’s script. A painstakingly polished piece of genre fiction, this script shows Diggle’s previously proven ability with reality-rooted crime stories but pairs it with a level of likeable and believable characterisation that elevates the first issue to a world that’s worth visiting.

In the hands of a lesser writing team, this book could feel like a rushed collection of cliches and overused tropes. We’re quickly introduced to the oddball police partners (one of whom is our protagonist, loose cannon Kate Burnham), before following them to a crime scene and getting our set-up case for the series. After that, perennial outsider Burnham puts together a team and starts investigating, finding a lead that might just turn this relatively innocuous homicide into something more complex entirely.

There’s nothing in that rundown that really differentiates this book from the slew of CSI ripoffs and reworkings that have made their way into the public consciousness in the past decade or so, but Diggle and Cruickshank manage to enliven the genre by simultaneously embracing its tropes and slyly subverting them. Every interaction we see, whether it’s Burnham’s partner chastising her for never opening up to him, or Burnham getting chewed out by her commanding officer (a no-nonsense older black lady, because of course she is), or the varied reactions of the other detectives in the wake of her bungling the mission, is all a variation on a very familiar theme.

But the familiarity of these conversational set-ups allows Diggle and Cruickshank to explore the characters behind this caricatures, and the result is a collection of individuals who feel at once familiar and full of deeper, unexplored layers. Perhaps their most impressive feat is writing a first issue that reads like the start of a new arc in a narrative you’ve already invested in. By being so confident about the collective consciousnesses understanding of their genre, Diggle and Cruickshank are able to bypass the expositional world-building that can often bog down a début issue and just jump straight into telling a story.

On hand to help is Mutti’s magnificent art work, and it’s every bit as well versed in crime visuals as the script is with the criminal narrative. On first readthrough, there’s an immediacy and realism to Mutti’s uncluttered, figure-focussed pencils that helps propel the story without distraction. His style feels relatively sedate, and his unobtrusive design makes each of the main characters easily recognisable as police procedural archetypes.

However, with the art as with the scripts, there’s more than just the rehashing of existing motifs. For Mutti, that extra something can be found in his faces. His expressions feel grounded and real, steering clear of the melodrama and faux outrage that often seeps into similar titles that bill themselves as ‘realism’. For some, Mutti’s restraint might feel a little dull at times (he isn’t really given much to work with outside the realms of ‘nondescript high-rise’ and ‘nondescript police precinct’ to work with in this issue) but the twist on the final page offers up a glimpse of a wildly different world that is clearly going to be explored in length as the first arc goes on. Here, Mutti gets a chance to experiment with some more risqué clothing designs, and Popov pushes the colour palette away from the khakis, beiges, and greys that characterise the majority of the issue and towards something a little more sumptuous.

Like I said before, it’s difficult to explain what makes this book feel different from the hordes of other crime drama releases that populate almost every form of media out there at the moment. The closest I can get is the sense of metered self-awareness that manages to steer clear of smugness while never falling victim to the cliches that this genre can be so easily prone to. There’s an intelligence to Diggle and Cruickshank’s script that kept me interested while they built their world, and I’m genuinely excited to see how this story escalates from here.

Final Verdict: 8.3 – A strong piece of genre fiction that showcases the talents of a creative team in complete “Control” of the situation.

Hello… Is this thing on?