Once every so often, a comic book arc comes out that is unexpected and bizarre, but surprisingly welcome. Now, “Cosmic Ghost Rider” is that story and it is so much fun. I don’t know what we did to deserve such an excellent action adventure coated in inky black humor, but I won’t question it. Some Spoilers Ahead!. 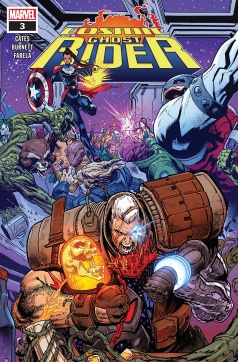 Frank Castle, in his short time as the Cosmic Ghost Rider, has turned time and fate on its head. In the midst of this, The Rider and Baby Thanos cross paths with The Future Guardians of the Galaxy who have a problem with his misguided plans.

We are now three issues into the five part mini-series. While it is a little out of place to have Frank Castle throwing out wacky Deadpool-esque quips and being generally zany, this version of the character has found his groove. This is a version of Frank who went completely insane, died, and was given the Power Cosmic of Galactus’s heralds and became Thanos’s right hand before dying again. It opens up so many possibilities for Frank who is now a super-powered immortal; and while characters always seem to return to their original visage, this detour into insanity is highly entertaining.

Frank’s motives come from a good place: He chooses to return from the dead with the help of his Rider powers to kill Thanos before he can fulfill his destiny of becoming The Mad Titan. However, it quickly becomes apparent that by attempting to adopt Thanos, rather than murder him in his crib, Frank has still doomed the futures of our beloved heroes. As Cable makes clear, no matter what path Thanos is on, no matter what changes Frank tries to make — mainly keeping Thanos away from violence and murder, a task Frank has done incredibly poorly — Thanos will always become a weapon of mass destruction on two legs.

It could be said that a lot of this series is directed at casual fans to stay relevant with characters that are currently popular, like Thanos, Cable, and Frank Castle, but the book is so bizarre that it never crosses the line of gratuitous fan service to those who pick up books on a whim and it is safe to say that not all regular Marvel readers will be wooed by its nonsensical charms. The kinetic action of throwing myriad characters into the insanity, whether it be X-Men like Gambit or Cyclops, Moon Knight, Blade or She-Hulk, is humorous and does a great job of keeping your eye constantly moving between the text and art. At times it feels like a “Where’s Waldo” book, making the reader attempt to catch every detail, joke, and character embedded into every frame. And because we’re dealing with alternate timelines, we get to see some fan favorites come to gruesome ends, knowing it holds no bearing on their true fate. At the heart of this brutal, but genuinely funny yarn there is a real evil behind the action and like Frank, we are laughing, even at the darkest jokes, in hopes of keeping that darkness at bay.

It is clear that Cates is having as much fun writing “Cosmic Ghost Rider” as it is to read and absorb. The humor ranges from broad slapstick to scalpel sharp. The way he crafts the ludicrous story turning classic characters and motifs on their head while keeping the clear voice of classic Marvel space adventures in the forefront. Fans of the cosmic/space comics like “Silver Surfer,” “Guardians of the Galaxy,” and “Nova” will enjoy this series that incorporates all of the whimsical elements from those books with the bone shattering violence of “The Punisher” and “Ghost Rider.”

Dylan Burnett’s art work has a more innocent and cartoonish presence to offset the blood and guts. If it were done in a more realistic style, it would be unsettling instead of amusing and difficult to look at. He manages to have characters and settings made up of tight, substantial line work blended with a fluid and loose-fitting energy that makes for an elasticity that allows the world to move into the peculiar and snap back to reality at a moment’s notice. The majority of his character designs keep things close to the norm, or main-stream interpretations, but as the timeline is repeatedly tampered with, he has the freedom to make changes, some subtle, others ranging towards eccentric, that brings in some great what-if costumes and looks. While Frank Castle’s human look is OK and does not suit the character, the design of his Ghost Rider persona is top notch. The combination of space suit and Punisher armor, along with the his flaming skull contained within the clear helmet makes for a great look. Every time the Cosmic Ghost Rider is in frame is a highlight. Fabela’s colors are a sight to behold on top of the illustrations. The range is a rainbow whirlpool flung across space at warp speed. The final page of each issue has held an insane image and this chapter is no different. No spoilers here, but fans of the series will not be disappointed by the final reveal.

This series is nothing short of bonkers and it has been an absolute delight reading it. It is one of the most successful absurdist comics to come from Marvel in a long time. The wait for the rest of the series will be an impatient one and here’s hoping that Marvel uses this version of the character a few more times before he’s written out of existence.

Final Verdict: 8.0 – “Cosmic Ghost Rider” #3 is a fantastic turning point for the mini-series and a wonderfully exciting and hilarious story to boot.