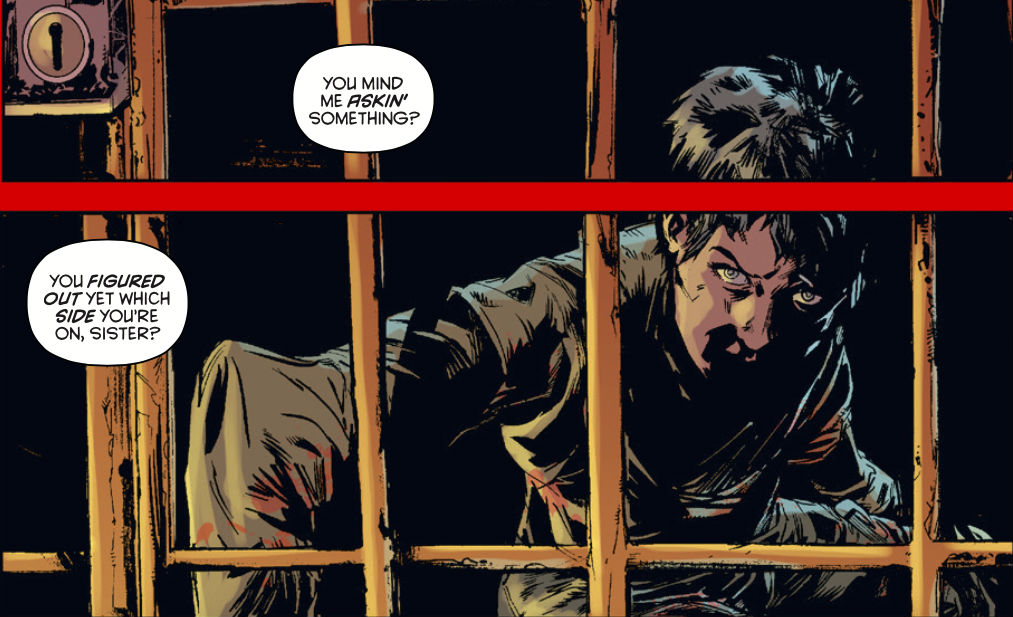 Louise wanted to be a musician and hang out with her girlfriend. Then a werewolf(?) attacked her while she was busking. Now she’s signed up to a government task force to find out how to get rid of this curse. But it’s not something that will let go so easily. Check out our review of the first issue of “Cry Havoc” below and look out for some mild spoilers! 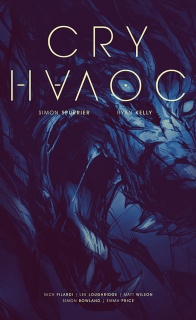 BEHOLD THE MODERN MONSTROSITY. X-Men Legacy writer SIMON SPURRIER and superstar artist RYAN KELLY present fiends, fragility, and firepower in an all-new series, mixing the hard-boiled militaria of Jarhead with the dark folklore of Pan’s Labyrinth. Includes an unprecedented use of multiple colorists (MATT WILSON, LEE LOUGHRIDGE, & NICK FILARDI) to define the story’s threads, and an incredible variant cover by Eisner Award winner CAMERON STEWART. This is not the tale of a lesbian werewolf who goes to war. Except it kind of is.

Louise seemed like she had a pretty good life, making some coin playing music outside the Old Bailey and living with her zookeeper girlfriend. Then a werewolf attacks and her whole life gets messed up. That’s the basic premise of “Cry Havoc”, an intriguing new series from Image that packs a whole lot into its debut issue.

The story for “Cry Havoc” takes place over three closely related time periods. Before and during Louise’s transformation into a werewolf, during her first foray with a military unit headed towards Afghanistan, and after being captured by the mysterious figure who might have something to say about Louise’s new status as a werewolf. Or at least whatever Louise is. “Cry Havoc” plays fast and loose with its background, not giving a definite answer as to how any of the supernatural hijinks that’s been going on works. Or if they’re only related to werewolves. While Louise might be able to transform into a big furry beast, one of her military comrades can sense locations that are mile away. Even the unit can’t decide exactly what they are when Louise asks them what they all are, giving answers that range from “different” to “fucked”.

This ambiguity plays nicely into the horror aspect, as we the readers get to know just as much as Louise, which is to say not much. On one hand, this helps drive home the idea that we are really dealing with the unknown here, building up the idea of werewolves as some unknown primal horror rather than just a spooky guy in a dog costume. Still, that vagueness does bleed into other aspects of the comic like who or why a mercenary group heading to Afghanistan suddenly showed up in the middle of two lesbians hanging out at the London Zoo. Sure, it leaves plenty of gaps that the creators can fill in at their discretion, but the jolt between settings is a little distracting. t

Still, “Cry Havoc” does an excellent job of blending its disparate time periods apart in subtle ways. For one, three separate colorists cover each era of Louise’s history (Nick Firaldi, Lee Loughridge, and Matt Wilson). The past is blue like Louise’s hair, the present yellow like Afghanistan’s sands, and the future red like the blood that will definitely be spilt before we reach that point). This kind of pallete subtly holds the story together to help you unconciously keep the three different era apart as you red. It’s so subtle, I wouldn’t even be writing it if Spurrier didn’t include it in an annotation section in the back to help you with phrases like “kebab shop” and “Crocuta crocuta.” It’s less holding your hand, and more letting you in on the creative process behind this book.

Artist Ryan Kelly, whose work you might be familiar with if you read “The New York Five” or “Lucifer”, meanwhile does an incredible job in regards to how impactful the art at time feels. There’s what you would expect, with the vicious werewolf attack that sets off Louise’s journey coming and going in a flash. But there’s also the sun-scorched base Louise’s new unit arrives at that just feels hot looking at it. In fact, my favorite moment of the book, where Louise plays a concert gig after getting bitten, only to have the monster come out through her music, is a great moment that sets up the book’s biggest conflict wonderfully and succinctly.

Final Verdict: 8.6 – “Cry Havoc” #1 is a strong debut for a title that leaves a lot of room open but has a style so confident that you know the puzzle pieces are just waiting to be put into place. This is a comic that plays its cards close to its chest, but looks like it’ll deliver something worth the wait.