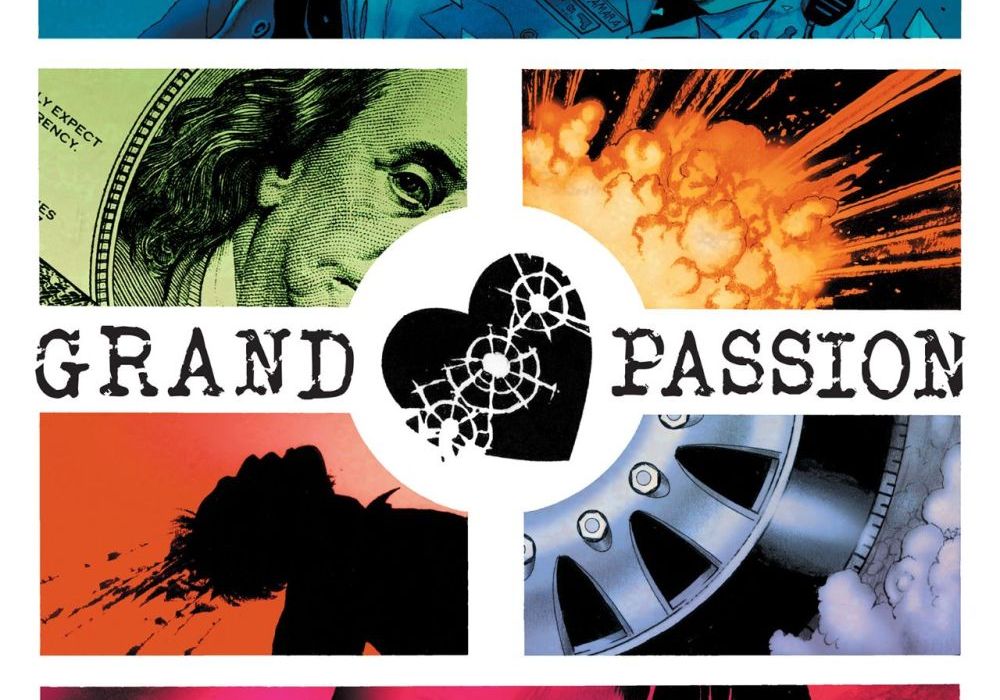 Announced over three years ago, James Robinson’s “Grand Passion” is finally here. When the book was announced, there was no artist attached, so it was only recently that we learned who would be joining Robinson on the series: Tom Feister, he of “Ex Machina,” “G.I. Joe” and more.

So, was the book worth the wait? Keep reading for our spoiler-free review. 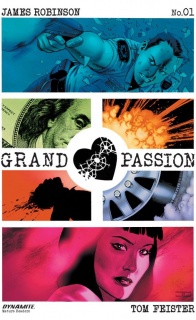 One of the comic industry’s finest — James Robinson (Squadron Supreme, Scarlet Witch, Starman) — delivers the surprising, funny, violent, and sexy tale of romance that comics have been missing! Doc’s a cop. Mabel’s a crook. They’re two wayward souls, fated to fall in love at first sight… even as Mabel swears to kill Doc if it’s the last thing she does. It’s Harlequin Romance meets Hard-Boiled Crime, as only James Robinson could deliver!

This book came about because someone at Dynamite approached Robinson to do a book there, seemingly after his well-publicized break from DC Comics. He decided to write a romance comic because the genre is not as prominent as it once was, and he enjoys romance stories. If you take those elements: Robinson, Dynamite, romance, and try to imagine what sort of a book you’ll get, you wouldn’t wind up with anything that looks like “Grand Passion.”

Sure, the book has an element of romance to it – we see the main character, Mabel, in two very different romantic situations, and there is an element of longing to both stories. But, at least this first issue, reminded me far more of a hard boiled crime story than a romance comic. We get cops and robbers – literally – at the heart of this story. This isn’t a case of a cop trailing the bad guys across state lines, setting up stakeouts and doing his best to catch them. No, this is dumb luck: the intersection between the characters happens because the cops are having lunch near the bank.

The characters of Mabel and Steve – the crooks – and Mac – the cop – border on cliche, but I think Robinson does that on purpose so that, at the end of the first issue, he can rip that cliche to pieces. Mac is the new guy in town and on the force, and is fighting uphill against the good ol’ boys that are the town law enforcement. He’s there as a favor to his dad (really – his story is that cookie cutter), and while no one dislikes him for any reason that isn’t “you ain’t from here, boy,” he still feels very much on the outside.

Mabel and Steve are your classic Bonnie and Clyde types, though Steve seems far more into the romantic part of the arrangement than Mabel does. She’s as cold as Mac is lonely, and Robinson isn’t too subtle in showing you either’s situation. None of this seems all that romantic, though, even if the elements of a love story are in place. In fact, that’s a rather apt description of the comic as a whole – it never quite feels like you think it should, and that’s a good thing.

The most striking piece of this comic, from the outset, is how little it visually resembles a Dynamite book. The publisher has been making strides over the past few years to diversify their look a little bit, with books in their King Features and Gold Key lines not resembling their usual fare. But this feels very different, with Tom Feister’s art adding a subtlety and nuance to the book that really impresses.

Like many folks, I knew Feister more as an inker – for Robinson’s “Starman” co-creator Tony Harris on “Ex Machina” specifically – and so I had no idea what to expect from the book, visually. I was pleasantly surprised by was how clean and expressive his work is here. The story is a straightforward one, and could easily be dull if presented incorrectly. Feister draws Mabel’s boredom in every line of her face whenever she’s not robbing a bank, and you can see Mac’s mind wandering at each turn, because he is longing for something else.

All of this is written into Robinson’s script, yes, but it would all be just as clear in a silent issue. The partnership between the two is especially strong considering that Robinson had begun writing this series long before Feister was announced on the project. That’s both a testament to Feister’s ability to make the script his own, and to the strength of Robinson’s story.

Robinson is widely regarded as one of the best dialogue writers in comics, and that manifests itself interestingly here, as he isn’t dealing with people who are particularly verbose or intelligent. Part of the fun of Robinson’s books is to see how he brings himself into the work, and this story has little of a the recognizable Robinson style to it in terms of dialogue. Mabel doesn’t want to talk much to Steve, Mac isn’t given a chance to verbalize his emotions too much. This is one of the more quiet Robinson books I can recall, and makes an interesting companion to some of his more verbose work.

But the great trick that Robinson plays here is that he lies in the weeds of a story that, at times, can seem very by the numbers, and hides little moments of brilliance within, that enhance the story in subtle and unexpected ways. For instance, there’s a throwaway line about a horoscope, and Steve deadpans “Always the same old BS…you will have a job opportunity…you will have an interesting offer…you will meet a tall, dark stranger.” He’s not wrong; that’s how horoscopes work. But all three of those things happen to Mabel by issue’s end – she meets Mac (the stranger), she has a job opportunity (the bank she’s robbing), and an interesting offer (to fall in love with a cop).

Robinson subverts cliche at every turn, even when it seems like he’s just playing into it, and that’s not easy to do. Mac’s story, in particular, is about as milquetoast as you can get. He doesn’t say much, we see him hold a photo of (seemingly) an old flame, we know he’s lonely and frustrated. And…that’s it. The character doesn’t have too much to do, and bucks the trend of what you’d expect from a cop that someone’s going to fall in love with. Aside from his looks – and he’s not drawn as the handsomest guy on Earth or anything – why would anyone fall for him? And, if he’s just admired/adored for his looks, that, too, bucks the trend of your typical romance comic.

Because of those subversions, Feister’s surprising art, and the fact that the series’ big theme – villain and crimefighter fall in love – has only been briefly introduced, the miniseries has a lot going for it. I hope Robinson and Feister continue to challenge preconceptions and push the story into unexpected places. Unlike some stories, this isn’t sold on some high concept or gimmick. It is simply a well done story at every turn.

Final Verdict: 8.25 – Surprising in all the best ways.