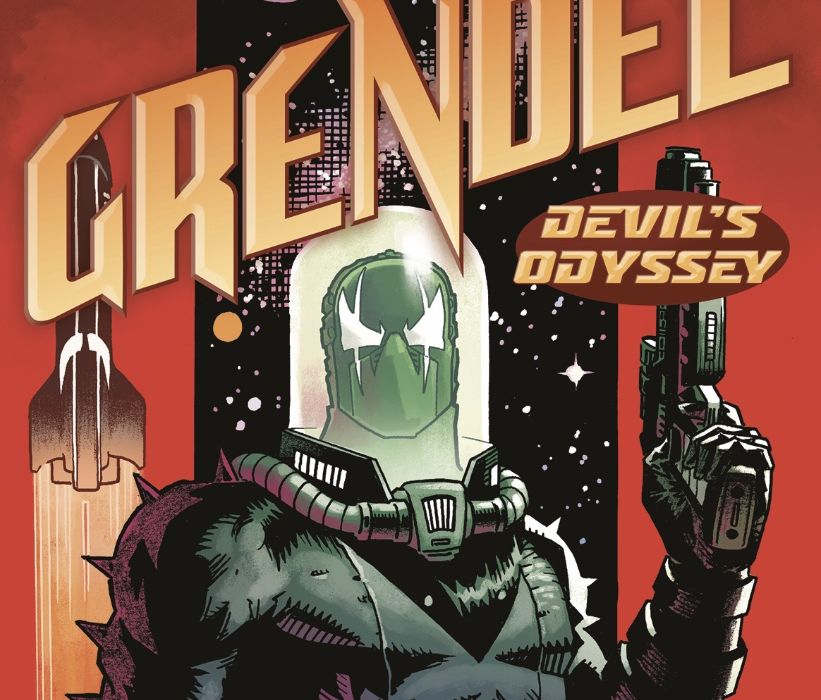 “Grendel: Devil’s Odyssey” #1 is our first foray back into Wagner-driven “Grendel” since, well, forever. Does it live up to the weird, luminous legacy? Warning: minor spoilers ahead. 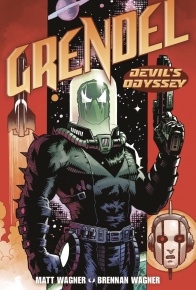 Cover by Matt Wagner
Written & Illustrated by Matt Wagner
Colored by Brennan Wagner
Lettered by Dave Lanphear Grendel Prime searches the stars for a new home for mankind, and Matt Wagner returns to his darkest creation! As civilization comes to an end on Earth, the final Grendel Khan gives Grendel Prime a new directive: Find a perfect planet to be the new home for the human race. But will the deadly and relentless paladin ultimately save humanity… or destroy it?

Does it live up to its own legacy? It sure does. Matt Wagner’s unerring balance of bombast and restraint is back (it never left,) and “Grendel: Devil’s Odyssey” #1 is a near-perfect first issue to kick off this hotly anticipated adventure.

The latter years of Assante, his lineage and Grendel Prime aren’t happy ones, and when we open in this new tale we find Grendel Prime’s been living in seclusion from the fallen Grendel Khan line as the empire crumbles on itself. It’s very much like the last days of Rome, sans fiddler, and Grendel Prime’s solitude is broken by a mysterious summons from the last Khan. The perfect killing machine is charged with a lofty mandate: leave Earth and the fallen empire to reestablish the glory of Grendel and humanity in space. There’s more, but that’d be spoiling things, mate.

Wagner’s best work on Grendel hinges on a keen juxtaposition of instinct and civility. We saw it in the early days with Hunter Rose’s veneer, tracked it in Christine as she reached for revenge, saw Orion rise and fall and watched Grendel Prime embody ruthless efficiency. “Grendel: Devil’s Odyssey” is at once a weird space opera and the logical culmination of the Grendel mythos. When all aspects of humanity have burned, where is there to go but a new frontier? The idea of the haunt loose in space is chilling, even as Prime’s arguably one of the least accessible figures to don the mantle. Wagner plays with this lurking menace a lot throughout this first issue, most notably in the ship design and in Grendel Prime’s rigid frame. All of his movements are precise and economical versions of action flourishes and all of his poses the most restrained heroic stances. He understands the motions and is programmed for greatness, but the entity behind the mask remains as elusive as ever.

Wagner plays with the stark horror of Grendel fresh upon a new world and the comedy of the last hope of humanity wearing all that darn armor in the same panels, and the bizarre contrast works. The backgrounds of Grendel Prime’s eventual landing spot are appropriately strange and extra-terrestrial, and the drone’s perpetual chirpiness is a perfect counterpoint to the expressionless mask. The creatures are wild and what you’d expect out of a space opera or 2000 AD joint, and yet in the middle of it all, pink shield and sword aflame, is Grendel Prime. Ready to bring the specter back to life. It’s mesmerising, and Wagner’s stunning ability to convey so much with such a constrained line and minimal shading continues to dazzle. There’s breathtaking architecture in every panel, and no one can place an inset the way Wagner can. Each is a perfect, zoomed-in reaction shot. Often humorous or poignant, and never wasted.

Brennan Wagner’s color palette is magnificent and a possible homage to all the good ‘70s sci-fi that inspired Matt Wagner in the first place. Grendel Prime and the ship are done in an oily, insectoid black that gleams in every panel, from the technicolor portal the ship bursts through to the desert-hot backgrounds Grendel Prime clomps through pages later. Wagner plays with a very subtle range of blacks and greys on Grendel Prime’s armor, and picks out each piece in just enough detail without derailing the whole. The creature featured in this issue has some of the same menacing darkness but is made gorgeous by purple, pink and blue accents, and the richness of those hues almost block out Grendel Prime in that brief, chaotic battle. Almost. He emerges unscathed and spare as ever, and that’s down to the perfect balance on the page. We’re left with melancholy and a growing sense of alarm, because Grendel’s not a generative thing, precisely. It generates force, control and mastery, but it’s not prone to bounty or beauty beyond the blade. The confusion here is deliberate to amp up the threat of the bug, too – whatever Grendel Prime was on Earth, it’s clear that space is a wild and vast landscape, and Grendel but one howling spirit in it. For now.

Lanphear’s lettering is on point, with a craggy font that’s an excellent nod to the indies back in the day and a rigidity that mirrors Wagner’s bold, vertical line. Siggy’s balloons are appropriately blocky and computerized, while Grendel Prime’s balloon tails zig-zag across the panel and remind us he’s powered (or is it trapped?) by more than meat and muscle in that suit. In addition, Grendel Prime’s font boasts very minimal kerning to help boost the feeling of claustrophobia and restraint. The letters practically slash across the page, but they’re such polite little slashes. And, finally, the bug battle has a lot of appropriately visceral sound effects, each perfectly suited to the motion and its subsequent disgusting result.

“Grendel” is a very special franchise to a lot of people, myself included. Matt Wagner’s spirit of vengeance, brutality and willpower has claimed many over the years, and each of Grendel’s avatars has been wildly different in their personalities, struggles and ends. It’s eerie, incandescently violent and incredibly funny, and was a defining comic for a generation. It stands now as a testament to what comics can do, and how far they can push a medium in its interrogation of an archetype through serial, sequential storytelling.

As for Grendel Prime, he faces a strange and terrible future. Will he carry out his mandate and reclaim his original purpose, or will he continue to forge his own path toward ever darker aims? This isn’t the Prime we knew before. He’s always been hard to penetrate, but watching the glory of your directive fall into weakness and despair would do something to the most inorganic of all of us, even without the specter within.

We wouldn’t have the comics that we do today without Matt Wagner and the world of Grendel. “Grendel: Devil’s Odyssey” #1 will hopefully introduce a whole new generation of comic readers to the legend, and inspire them to go back and rediscover a book that’s foundational to the indie boom of its time and the genre-bending works that fill shelves today. We’re fortunate that this foray back into such a seminal universe is kicking off with a bang, and all of the skill and weird charm of the original.

Final Verdict: 9.0 – “Grendel: Devil’s Odysssey” #1 delights with skillful work from two Wagners and all of the chilling gravitas that made the franchise great.