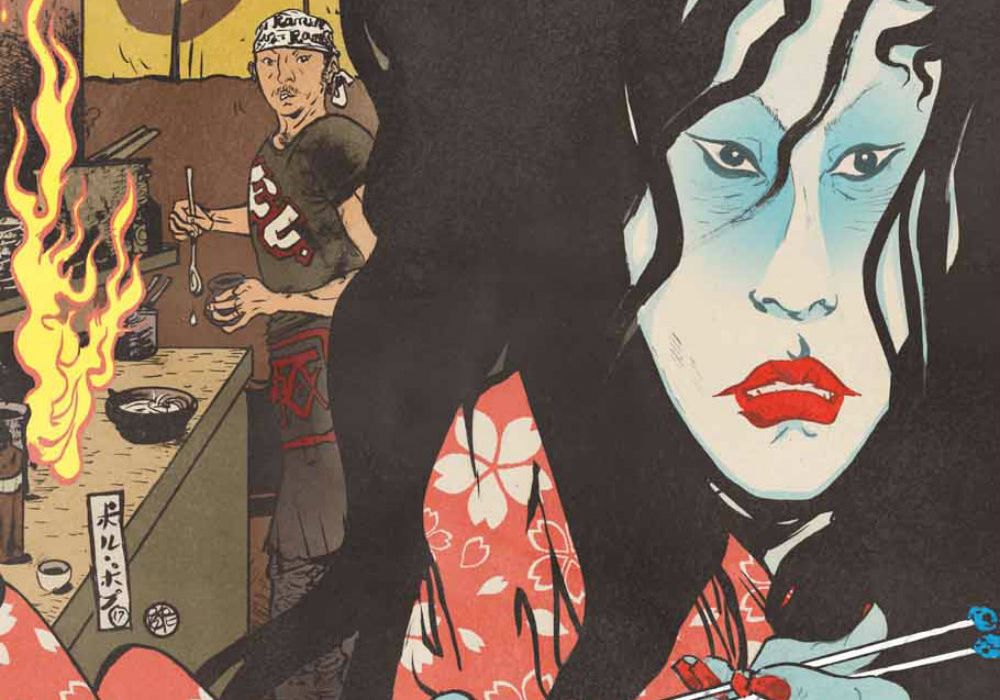 The highly anticipated Berger Books line at Dark Horse, edited by none other than Vertigo alumni Karen Berger, kicks off this week with the Food/Horror anthology, “Hungry Ghosts” #1. Backed by an all-star creative team featuring chef/author Anthony Bourdain and big names in the comics industry like Vanesa Del Rey, this looks to be starting off the veteran editor’s line with a bang. Will it succeed, or land flat? 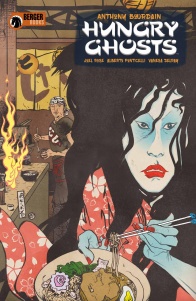 On a dark, haunted night, a Russian oligarch dares a circle of international chefs to play the samurai game of 100 Candles–where each storyteller spins a terrifying tale of ghosts, demons and unspeakable beings–and prays to survive the challenge.

Inspired by the Japanese Edo period game of Hyakumonogatari Kaidankai, Hungry Ghosts reimagines the classic stories of yokai, yorei, and obake, all tainted with the common thread of food.

First course: With bad consequence, a ramen chef refuses to help a beggar, and a band of pirates get more (and less) than they were bargaining for after their encounter with a drowning woman turns ghastly.

As soon as you open “Hungry Ghosts” #1, you’ll see how it harkens back to anthology magazines of old and reinvigorates them with a modern flair. You’re greeted by a female Yokai, the curator of sorts, who also has an involvement in the stories, a familiar aspect of these comics. But what’s interesting is when Bourdain and Rose use here what I like to call a lobby story. It’s a story that acts as the baseline or launching point for the proper anthology tales to spring from. It involves the guests of a high-class restaurant for all types of undesirables gathering around a table to tell tales of horror involving food in some way. It’s a clever way to loop everything together and make the segue between stories less abrupt.

But getting into the actual stories is the real treat here. The first tale, ‘The Starving Skeleton’, appears as merely a cautionary tale on surface level. But what Bourdain and Rose delivery here is a horror tale full of palpable tension and a lot of terrifying quiet moments. It’s interesting because as someone with a hospitality background I found myself sympathising to both sides of the story, and I think that might be what Bourdain might have been going for as a chef himself. The basis is essentially a Japanese chef who refuses to give a free meal to a starving, presumably homeless man after his store is shut. It works because of a culture difference: since this story applies to Japanese culture, and most of the audience reading this will be Western. I feel they will be questioning themselves morally at the end of the tale because they might have initially sided with the chef as opposed to the hungry man.

Alberto Ponticelli handles the art in the introductory tale ‘Kaidan’ and ‘The Starving Skeleton’, and does a great job of infusing western comic book style with manga influence. A lot of the characters have a decidedly sketcher pencilling style to them, making them seem more fluid and expressive. One scene that I really enjoy is of the chefs gathering around at the start of the tale. The stylised art works here because it gives all the profiles of each chef a sense of unease or movement. Each profile is never completely face-on, and makes them feel more human and uncomfortable with the topic they are discussing. In ‘The Starving Skeleton’, the style feels a little cleaner and restrained, but there’s a lot more bigger moments to balance. Having visited Japan recently, Ponticelli does a great job a conveying the almost claustrophobic suburban backstreets, with the cluttered telephone wires playing well into this sense of unease. Everything looks believable without looking realistic, which is really what a cartoonist should be about. Not to mention how impressive the reveal of the actual ‘Gashadokuro’ himself, who Ponticelli renders with tremendous grandeur and a terrifying sense of scale.

The second tale, ‘The Pirates’, may not be directly Japanese or food influenced, but it is my preferred of the two tales because of it’s distinctly feminist tone. At first, Bourdain and Rose spin a classic tale: a maiden awash at sea is picked up by an all-male crew with sinister intentions. And make no mistake, Bourdain and Rose don’t pull any punches here. The Pirates are by no means sympathetic, and spout pretty little one-liners like ‘We’ll rescue her and then have our way with her’ followed up by ‘I could suck on that ass till her head caves in’. It’s a great way to show to readers that these are the people to hate, these are the clear villains, and so it makes it that much more satisfying when the twist takes place. SPOILER ALERT, but the ‘helpless woman’ turns out to be a sea-demon and proceeds to cut off the genitals of every crewmember, then scream out that she’s holding them ransom in return for their gold. It’s a perfect and super relevant tale for our era and similarly feels like a great way to launch the line of Berger Books forwards.

Having ‘Redlands’ artist Vanesa Del Rey illustrates this story has to have been one of the best recent editorial decisions across the industry. Not only is she once again in her element telling a story that’s female driven, but her style is so tailor made for a story from this era that almost uncannily looks like it was taken from an old pulp magazine. It’s in every aspect of the story: from the delicate brushstrokes that render the tumultuous sea, to the way the ship’s sails delicately billow with carefully considered pencilling. On top of that, the way that Del Rey brings to life each slobbering, desperate member of the ship’s crew is disturbingly brilliant. In line with the tone none one of them looks sympathetic, just pure, disgusting villains in a great supernatural revenge tale. The sequential side of Del Rey’s art is magical too: there’s a hint of pulp, Frazetta style naturality to the way each character stands, yet they’re not static either. Del Rey channels greats like Neil Adams in his prime the way she uses expressive brushstrokes to give her characters a kinetic energy as they burst through crowds or dismember genitalia.

José Villarrubia handles the coloring here, and the tones are moody and expressive like you would expect in a collection of horror tales. There’s a consistency of palette throughout the whole issue, even from artist to artist, that ties everything back into the core theme and story. His coloring consists of mostly darker tones, but they’re not necessarily muted, rather they twinkle with a dark vibrancy. This is shown in ‘The Starving Skeleton’, which is set at early morning so Villarrubia opts to focus on the warmth of the restaurant’s lanterns, the bright emerald of houseplants and the luminosity to convey vibrance. The palette in ‘The Pirates’ is a little more muted but still uses a similar set of colors. Vibrancy still appears, but more subtly. It’s often used to show power: the bright purple of the captain’s robe, the glowing orange of the woman’s hair, and the otherworldly green of her demonic body all convey this in story beats throughout the tale.

Berger Books looks like it has a bright future ahead if all it’s titles retain the level of quality that “Hungry Ghosts” #1 has. The stories are not only haunting and atmospheric, but feel socially relevant in this era. Pairing them up with some of the industry’s best up-and-comers in Alberto Ponticelli and Vanesa Del Rey makes “Hungry Ghosts” #1 a series I’ll be looking out for.