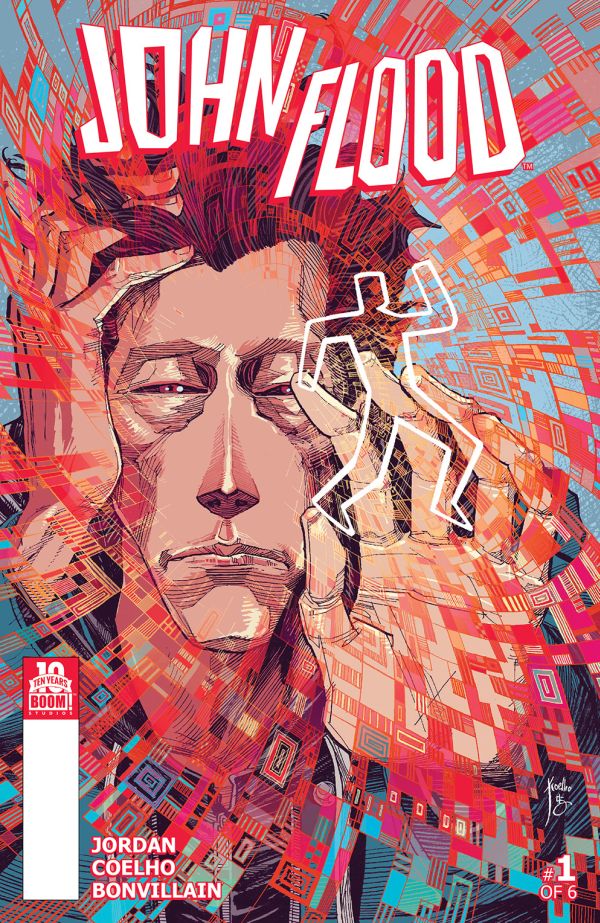 Justin Jordan and Jorge Coelho are launching this new series from BOOM!, and the premise is deceptively simple: relieved of the need for sleep, John Flood is able to do many, many things. Is being the lead of an entertaining new series one of them? Keep reading for our spoiler-free review. 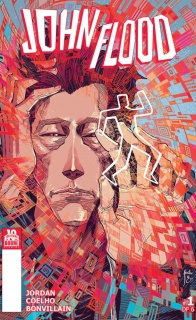 What’s to Love: Justin Jordan exploded onto the comics scene just four short years ago with The Strange Talent of Luther Strode and caught everyone by surprise. Now he brings us John Flood, a series that combines the metaphysical with the procedural in a way we think is really fresh. Joining him is Jorge Coelho, whose fantastic work on Polarity and Sleepy Hollow made him a BOOM! favorite. Perfect for fans of Desolation Jones and Sherlock Holmes.

What It Is: As the result of a government experiment, John Flood no longer needs to sleep, but now he’s in a constant dream state and sometimes can’t tell what’s real and what isn’t. But a side effect is that he sees patterns and makes connections no one else can, which serve him well in his new “career” as a make-shift PI. Together with a burly ex-cop, Flood begins to investigate when he “sees” one man responsible for thousands of unsolved murders, but now he himself has caught the killer’s attention…

For most of my life, I was a very good sleeper – a few minutes after my head hitting the pillow, and I was out cold. My father used to say that I could sleep through an earthquake. However, as I’ve gotten older, sleep has become a more frustrating part of my life. Being up at 2 or 3am for an hour on a day when I have to be at work by 9 isn’t an unusual thing for me anymore, and the weird space my head goes into when I don’t get enough sleep is not a pleasant place to be.

And yet, the idea of not needing sleep is an appealing one on so many levels. Imagine all the books I could read, or crazy recipes I could try, or all the work I could accomplish if I didn’t need to rest up each night? I think many of us have fantasized about something like this, for unlimited time to accomplish what we want.

Well, “John Flood” puts that fantasy to rest quite quickly, as it shows Flood as having gone slightly mad due to his lack of sleep. He lives in this limbo between reality and dreamlife, so much so that he carries around a camera to look through the lens, therefore showing him what is real versus what is hallucination. He has read a seemingly unfathomable amount of books, and is also quite obnoxious. When I spoke with Justin Jordan about the book, he said that it never occurred to him that people might fantasize being a character like Flood, but that is what I expected going in. Now that I’ve read it, I can see what Justin means.

The book does a nice job in replicating the experience of not sleeping; the art can be woozy and free, allowing Coelho to really let go of reality in parts, and craft a book that looks unlike much else on the shelves. The story also comes in drips and drabs, much like a dream, and parts connect in ways that may or may not be logical. Even the scenes without Flood himself in them have a spacy, hazy quality, where things jump out and surprise you.

Coelho, who many readers will know from “Polarity” and “Sleepy Hollow,” has this great ability to make each panel teem with unease. The whole book feels on edge, and whether a character is eating his dinner or running from a murderer, they are consumed with emotion. At the extremes, his work can seem unhinged. There’s a scene that takes place following a serial killer, and everything in the scene is amped up to 10, and the work loses a little bit of its tether to reality. That’s not necessarily a bad thing, as the scene calls for an over the top approach, but there are parts of the book that do feel like they’ve gone a little over the edge. As the series progresses, we’ll see if this is a good thing or not – in the first issue, it isn’t a problem, nor is it really a strength.

That said, all the sequences with Flood are perfectly illustrated – we get a brief glimpse of how he sees the world, and it is a combination of seeing life through an aquarium and through beer goggles. When we see him interacting with the world, if we’re not conscious of how he sees everything, the character can get annoying very quickly, but Jordan does a nice job of reminding the reader, at a few points, that Flood is not a well man.

Most of the issue is spent building up the main characters who are going to be with us on this journey, and those are the strongest parts of the book. When the book’s plot gets in the way of the character development, the book looses a little steam. Of course, this is a necessary function of a first issue – some kick off the plot strong, and let the character beats come (like the recent relaunch of “The Omega Men” for DC), whereas others bring us the characters first, and then worry about the plot a little later. “John Flood” #1 is part of the latter approach, and while it works, I would like to find out a little more about the serial killer that is setting the book in motion.

The aforementioned serial killer sequence is the most violent in the book, and violence is something that Jordan is known for, specifically because of his ‘Luther Strode’ books. But Jordan, as shown in his work on “Green Lantern: New Guardians” isn’t just limited to big violence. This book fits in nicely among Jordan’s bibliography, as it feels like the most refined pitch from his creator owned work, but it still has a real edge and excitement to it.

Final Verdict: 8.2 – An intriguing start to a series, “John Flood” #1 sets the stage for a unique new book.