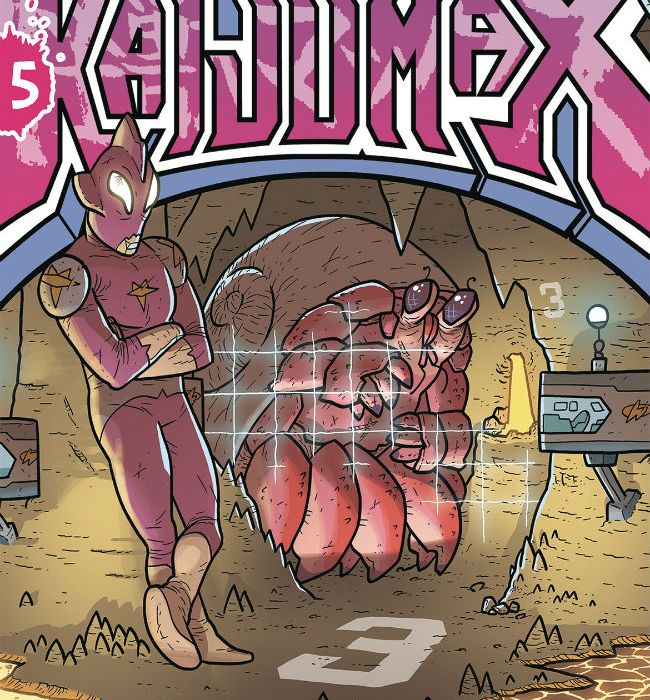 “Kaijumax” has been Zander Cannon’s acclaimed long-running series for quite some time. The concept of “Orange Is The New Black” meets Japanese Kaiju has led to some super interesting stories and complex character arcs. But does the Oni Press monster series have what it takes to stay fresh into its fifth ‘season’? 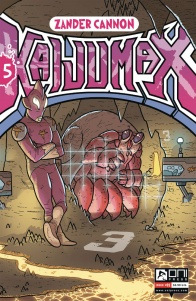 NEW SEASON! NEW JUMPING ON POINT! The longest rampage is the Orange Mile. Follow us down into the bowels of the earth to Kaijumax’s Death Row, where all appeals to cosmic justice have been exhausted and the planet’s worst killers await their fates. Powerful mob boss Pikadon is defiant as he is finally brought to trial for an infamous cop-killing, but his legendary reputation is on the wane after a long time in hiding. Up on the pound, the remnants of the prison’s other gangs adjust to the arrival of a charismatic new inmate Sprinkles the Unidragon whose history (and charges) are shrouded in mystery. Also: Exonerating special effects footage! Giant-sized side hustles! And… ominous onomatopoeia?

Cannon opens the series super well by satirizing one of the biggest pop culture movements of this century: Pokemon. This is first, a super clever way to start off this season as even I, someone who was only partially interested in this series beforehand, had a ball seeing the police bust open an underground ring where the ‘Mons had humans battle each other in a violent pit fight. The way that the ‘Mons are caught is genuinely hilarious, and the scene of Pikadon being trapped in the prison wall is played brilliantly in a way that I honestly couldn’t see working as well in another medium, balances comedy with drama. We also open this season to another intriguing conflict that builds upon the already interesting world of “Kaijumax”, as an alien signal is intercepted claiming that a Hermit Crab-esque Kaiju in the ’70s was wrongly convicted for his crimes. We get hints of political intrigue and conspiracies that I would have never expected in a book like this, but Cannon makes them work so organically here.

Then we get to the individual characters, or the Mons if you will. Cannon ensures that this debut issue is stuffed with content and intertwining plot lines. The first shot we get within the prison is one of the inmates, Sharkmon, having started a barber business, using the former goat-man, now 100% goat Daniel as clippers for the masses of hair each monster has. This career change of sorts symbolizes a deeper change within Sharkmon that is explored further on in the issue: they’re a pacifist, and also trying to beat a glow addiction that’s been hurting them all these years. When Sharkmon’s first clients turn on him, it’s interesting then to see how far they will go to protect Daniel’s safety rather than their own. Sharkmon tolerates being beaten up by the other Mons, but when they try to go for Daniel, they cut off one of the monster’s hands before he can grab him. It’s an interesting character study and this level of depth is explored through almost every character in this issue.

The character artwork in “Kaijumax” always manages to look interesting and hyperdetailed without overcomplicating the overall designs. The best case of this here is with the Pokemon -pastiche characters peppered throughout the issue. Their ringleader, Pikadon, has the overall shape and silhouette of… well, an inflated Pikachu. Yet it’s that extra details that Cannon infuses him with that gives him that additional level of personality and fun: he’s spotted with tattoos bearing quotes like “The Very Best”, “Super Effective” and “Never Fled”, and he constantly carries a grumpy mafia-style disposition. Later on, we get a scene of Pikadon and his friends entering the prison, where we see another new challenger step up to the ranks: Sprinkles the Unidragon, who bears the characteristic of having his rainbow mane wrapped around his neck like a scarf. It’s so on point I can hardly even take it. One of my favorites, throughout the series but particularly in this issue, is Director Matsumoto’s mech design. The withdrawn Japanese attendant look that they bear implies so many things through the way Cannon moves them through space, especially with the lack of a mouth. It gives Matsumoto a body language that makes it seem that they always have an ulterior motive, yet they still believe they are firmly in the right.

Cannon’s artwork does a superb job of balancing a simplistic, animation-influenced style with careful comic-book detailing. Each scene manages to look busy and life-like without being overcluttered, thanks to Cannon’s clever environments. The opening scene uses crystals and debris strewn everywhere, whilst giving each character in the scene notable wearing to imply that this was a pretty rough place. Similarly, the prison scenes use the clever techniques of ever-changing mountainscapes that make the environment feel dynamic and interesting whilst not being too demanding on the artist to constantly innovate.

The colors in this issue gleam with innocent vibrancy as always, and Cannon (with assists from Jason Fischer) does a great job of them in this issue. The opening scene has some of the most exciting lightings in the comic, where we see a small stadium of humans being pitted against each other. The tiny stadium is lit up by grim, blinding spotlights that highlight from above how miserable each character is, whilst the room that the Mons are gambling in is moody and dark, with the blue spotlights looking like small LEDs to them. Cannon and Fischer also use some clever lighting in the prison scene with Sharkmon. The shot is illuminated by a setting sun, which at first looks comforting and beautiful with pink and orange hues. As we see Sharkmon get beat up later by their clients, the sun lowers even further, giving an opposing meaning of cruelty and ignorance once we see what has taken place.

“Kaijumax: Season Five” #1 kicks off to a great start, with some hilarious new punchline characters and an intriguing new mystery that looks to expand upon the mythos and history of the series. Cannon is great with art as well, giving us the usual spread of simple-meets-intricate that makes this book stand out so much. Even if you haven’t checked this book about before, this issue works well as a new jumping-on point so you have no reason not to be reading Cannon’s expansive series.

Final Score 8.9 – A thrilling, hilarious new chapter in the ongoing “Kaijumax” saga that promises to deliver some interesting worldbuilding.