When you think ‘comic books’, you think ‘superheroes’. Granted, there are comics of other genres but the capes are top dog, no doubt. It can be easy to forget, this wasn’t always the case. Once upon a time, readers were all about romance! Real mushy, lovey-dovey, melodramatic stuff. Seriously, readers ate it up. DC’s “Girls’ Romances” ran for 160 issues. DC’s “Girls’ Love Stores” (a completely different title that ran at the same time!) lasted 180 issues. Of course, superhero comics reasserted their dominance and romance comics faded away. “Mysteries of Love in Space” #1 bridges the gap between both genres. 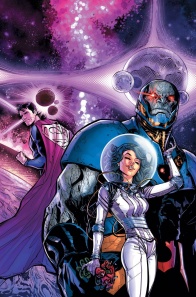 “Mysteries of Love in Space” #1 is the latest in DC’s holiday giants, dropping with Valentine’s Day just around the corner. This issue contains seven new short stories as well as a classic story featuring Adam Strange. Now, the last two holiday giants (“Cursed Comics Cavalcade” #1 in October and “DC Nuclear Winter Special” #1 at the end of November) didn’t grab me. I liked a handful of the stories but felt indifferent to the rest. “Mysteries”, on the other hand, is pretty solid all the way through.

Maybe two stories were just okay but the rest were really good. I appreciate that the comic is lighthearted and fun, sometimes even silly in the very best way. It has its emotional moments but isn’t some melancholy, heart wrenching affair. It’s a cute comic. It also highlights lesser-known characters, which is always appreciated.

The giant begins with ‘An Apokoliptian Love Story’ which reinforces how bleak things are on that planet. It’s probably the darkest story of the bunch. It seems that Mr. Miracle and Big Barda were the only ones to get their happily ever after. A captured rebel learns the hard way that on Apokolips, Darkseid is love. Darkseid is everything. Darkseid is.

Kilowog’s short stories was one of my favorites. Kilowog is the last of his kind, a teacher that can help a student reach out to others but can’t quite take his own advice. The final three panels hit the emotional note perfectly. In the first, his face is illuminated by the lovely date he pushed away. In the second, his face is shadowed and ends on just his silhouette. Poor poozer.

Bizarro’s tale is similarly effective in conveying the inherent loneliness of the character. He finds love and loses it just as fast. His story dials up the silliness just a bit though (the guy talks backwards, is that ever not funny?) and ends on a cute note. The classic Adam Strange story with alien barbarians and giant death blades hanging from spaceships is pretty weird in retrospect. The absolute silliest story though is definitely Space Cabbie’s. He’s already an odd concept by himself but falling madly in love with his GPS A.I. is just…wow. I’m still chuckling as I think about it.

I’m pretty unfamiliar with Crush (Lobo’s maybe daughter on the Teen Titans) but she seems cool in a ‘Lobo but PG-13’ kind of way. Falling for an alien MMA fighter and then fighting said alien in the octagon when things turn south is definitely something ‘the Main Man’ would do. It was a good showcase for her character. Hawkgirl, Jessica Cruz and Starfire wrestling an alien creature and spending a quiet Galentine’s Day together was a nice moment as well.

The only real A-Lister in the giant is Superman. His story reinforces the fact that Lois and Clark are absolutely perfect for each other. ‘Glasses’ really humanized the Man of Steel and shows that when Superman needs to be saved, Lois comes to his rescue. It really is an effective story in just ten pages.

There are plenty of different artists throughout the giant, each with their own style. All of them do good work. I particularly liked Lois’ expression when she put on Clark’s glasses, amused she could never figure out the secret. The space monsters (there are a few) are all fun to look at. The creative choice to put a restaurant in an asteroid was cool too. I also have to take a second and note that the cover is absolutely perfect. It’s so over the top with Superman’s thought bubbles, Lois’s dialogue and the advertised ‘cosmic agony and ecstasy’. It’s a spot-on parody of romance comics.

“Mysteries of Love in Space” offers the best of both worlds. It focuses on superheroes while giving a little taste of romance comics’s long gone heyday. It’s nice that this giant chooses to laser in on the positive aspects of the DC Universe, like friendship and love. It might be a little corny, but it’s always appreciated. It makes the heroes more relatable, fleshes out their character. Somewhere in the multiverse, there’s a reality where romance comics still reign supreme. Since we can’t visit for the foreseeable future, this issue is as close as we’re going to get.