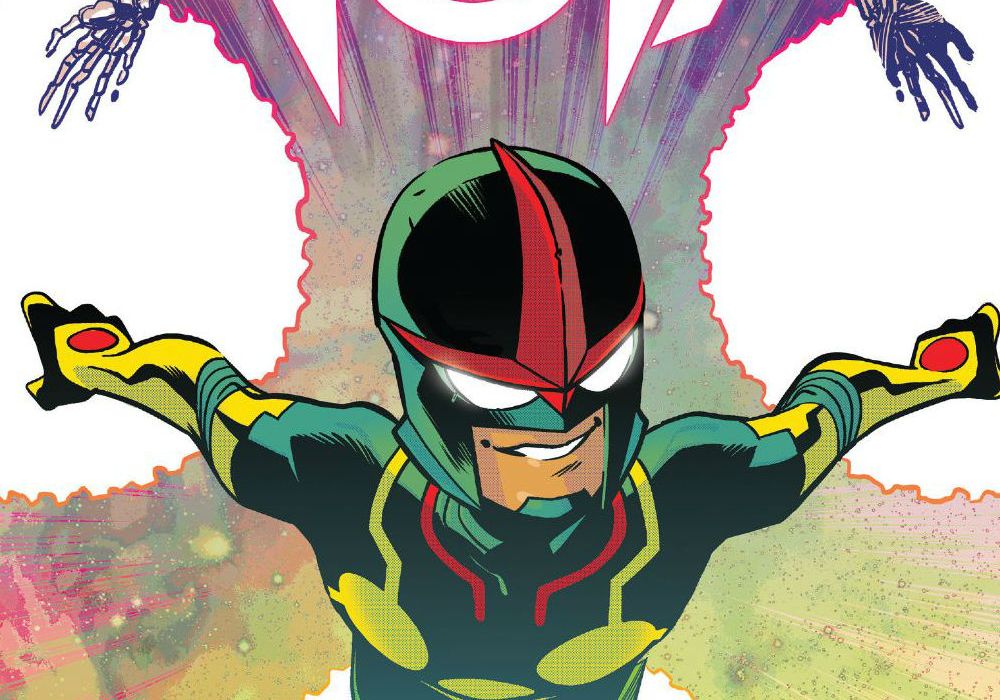 A hero makes his return, but how will this impact his successor? Let’s take a look. 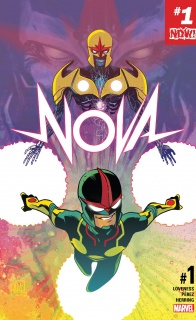 Rich Rider makes his roaring return to the Marvel Universe! How will Sam Alexander cope with this unfathomable homecoming? It’s the return you’ve all been waiting for. Or is something…else? Strap in True Believer, you’ve never seen a NOVA book like this before!

“Oh look,” cry the children in the town square, “there goes Ken Godberson! Remember how he always would go one about how Rich Rider won’t come back? Boy, I bet he feels like a good asshat now and has so much egg on his face, the chickens won’t stop trying to break into his house.” Thank you so very much, dear children. But in your guffawing ramblings about something some character did in 1975, you may have missed the point I make whenever I talk about the original Nova. I never said he wouldn’t be back, I said he shouldn’t be back. Listen, Richard Rider is a character not unlike Barry Allen in that he had a generally good character arc that concluded with a big death that lasted. That felt like it mattered. That it allowed time to progress. And then they decided to bring Barry Allen back and everything went to hell for the franchise that is only now really recovering. It’s the same problem with All-New X-Men, except that one is taking literally the five oldest characters in the franchise and having the cowardly arrogance to call them “All-New”.

So, is this issue good? Yeah, actually! Does it justify bringing Rich back? Welll…

Let’s get all the good out first, which there is in abundance. First is that writers Jeff Loveness and Ramon Perez do not treat this as a character reset. Rich Rider’s death and time in the Cancerverse has had a major impact on him in the form of PTSD. It also deals with how he is readjusting to life on Earth before getting his helmet back and getting to have that rush of flight for the first time in a while. They are small moments, but strong.

But a good majority of this issue actually focuses on Sam Alexander and I have to say, this is the most fun I’ve had with Sam since Gerry Duggan left. Here’s the thing about Sam: He’s a ditz. Like, I mean that in a good way! When he’s in a battle, he’s actually pretty smart, probably a better tactician than his peers Kamala and Miles. But it’s when he’s out of that you see all of his vulnerabilities and his goofs and they are quite hilarious. Not only that, but they feel incredibly real. One moment in particular is him returning to school after spending days in space trying to help Ego the Living Planet (another hilarious moment) and trying to talk to a new girl, meanwhile his internal monologue is a complete anxious wreck. That said, the dichotomy between in and out of the costume does show this kid as a great heart and he knows when to focus when it counts.

But the biggest asset that this book has going for it is the artwork. Previous Nova series had some decent, if just very mainstream, artwork. However, Ramon Perez (coming off his work on “All-New Hawkeye” and colorist Ian Herring have given this book such a unique and -more importantly- fun vibe. The artwork is quite versatile, able to balance cosmic grandness with humorous cartoonwork (one particular standout being getting inside Sam’s head where the artwork of Sam fighting a bunch of supervillains is very reminiscent of “Calvin & Hobbes”).

Ian Herring’s colorwork makes such a good use of pink. I know that’s weird to hone in on, but stick with me. A lot of artists can draw space to be mostly the black void, and while that may be true it does make for a boring palate at times. Herring’s colors make the cosmic feel cosmic. Swirling nebulae and space dust contrasts beautifully with a sunset on Earth as Richard heads into the atmosphere for the first time in forever.

One finally note on the colorwork: I am so glad that, this may be the first time in comics where Sam actually looks like he’s Latino. His mother and sister have shown it before this, but he was always colored as a bit more white. Here, he looks a great deal more like his original counterpart from the Ultimate Spider-Man television series and it’s so important to finally have that down.

So, did I enjoy this issue? Yep. Did it justify Rich Rider being back? No. At least not yet. Bear in mind that, at this point, I still find that aspect of this issue just being good execution of a bad idea (whereas something like ANXM is just bad execution of a bad idea). It’s early days indeed, but Loveness, Perez & Herring have shown a massive load of potential for when these two Nova’s meet. They have shown to be capable of bringing both high-flying and low key fun, which is really what this book needed to be. Buy this book instead of “Champions”, which features a terribly-written Sam.

Final Verdict: 8.4- A heartfelt return for both Rich and Sam.