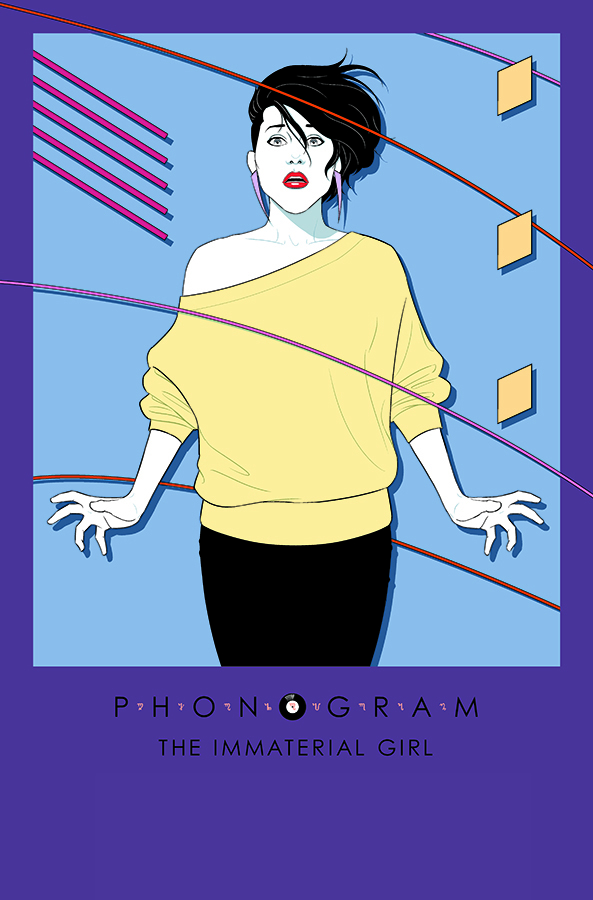 We’re doing the Pick of the Week a day early to talk about “Phonogram: The Immaterial Girl” #1 from Kieron Gillen and Jamie McKelvie! There’ll be some mild spoilers after the jump and a whole lot of pop existentialism. 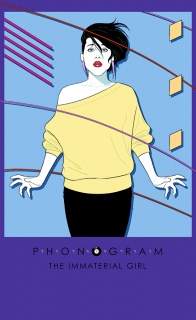 The team behind the New York Times bestselling and Eisner-nominated smash hit THE WICKED + THE DIVINE return to the acclaimed urban fantasy where they first made their names. Nearly a decade ago, Emily Aster sold half her personality for the power to rule a coven of phonomancers. I’m sure nothing could go horribly, monstrously wrong now. In a world where Music is Magic, a song can save or ruin your life. In THE IMMATERIAL GIRL, we discover what a video can do.

The greatest concept ever introduced to the Batman comics was the Joker’s supersanity. In “Arkham Asylum: A Serious House On Serious Earth” from Grant Morrison and Dave McKean, a psychologist explained that the Joker isn’t insane. Instead, he reconstructs his personality at the start of each day in order to adapt to the world around him. That’s why he’ll be carving out his own face on Monday before trying to take over Gotham via surfing contest on Tuesday. The Joker, a product of an increasingly chaotic culture, knows that there’s no sense in identifying as a single constant persona, so he changes who he is based on circumstance and whim. Needless to say, this is an incredibly dangerous mindset that probably led to the Clown Prince of Crime’s triple-digit body count. When The Joker shifts through personas like a wardrobe, the only constant he finds is chaos.

While she’s not nearly as evil as the Joker, Emily Aster has been searching for the same type of change Joker has. Or rather, Claire was. But what separated Claire from every other hero looking for that salvation called character development is she took a shortcut that was only ever temporary. She banished Claire, what Emily believed to be her sad wrist-cutting inferior side to make room for Aster. Now Emily, who’s made a stable life for herself (with an office even!) found that Claire made her way back into the material world. And she ain’t happy about the whole “banished to the other side of the mirror” business.

I’m so fascinated with the aspect of change in “The Immaterial Girl” because it’s evident that Emily’s not the only one to have been through some sort of ringer. Other characters from the “Phonogram” canon like Lady Vox, Seth Bingo, and David Kohl make appearances too, in a flashback set in the long-forsaked year of 2001. What’s mildly unnerving is how different the eight years changed them and how little they changed Emily. Seth (who will throw a Shoryuken at anyone who badmouths The Sugababes) is almost unidentifiable from his appearance in “The Singles Club.” Emily, meanwhile, remains almost completely the same as her appearances in “Rue Britannia” and “The Singles Club” where this story was first foreshadowed. Hell, even Kohl (a man once adamant on Britpop being relevant in the mid-2000’s) tells Emily she doesn’t change. While most characters went through incredibly gradual transformations, Aster’s sudden switch with Claire only laid an unstable groundwork that’s begun to crash down. But really, the threat of reverting into an older more destructive personality feels like a much more real threat than anything “Phonogram” has tackled before. It’s the same type of danger that comes with seeing an old ex or (worse) hearing a song that reminds you of them.

While “Phonogram” made its name in heavily opinionated discussions on music, “The Immaterial Girl” is instead focused on music videos, mostly a-ha’s iconic video for “Take On Me.” If you haven’t seen that video, trust me, you have. Emily’s relationship with the video set the stage for her deal with Claire and leads to a decidedly interesting direction for the next few issues of the series to go. Plus, major props to Jamie McKelvie for following up on how creepy that music video really is. That, and the deliberate sense of pacing for some of the book’s more horrific moments, really define this as the most dangerous “Phonogram” story yet.

Speaking of McKelvie, it’s neat to compare and contrast “Phonogram” with “The Wicked + The Divine” if only because of how intimate “Phonogram” feels. While “WicDiv” lends itself to fire, explosions, and the occasional storm of crows, “Phonogram” and its conflicts are all handled through speech and the side-eyes being constantly thrown. While “Phonogram” may not have the extravagant fight scenes “WicDiv” has (at least for this issue), McKelvie’s characters are certainly alive enough to keep any conversation intriguing. Neatly divided panels control the flow of Emily or David’s thoughts on joining a coven, at least until something fantastic or cunnilingus-based happens. Even Claire, trapped in her other world, remains confined in a strict panel structure, at least until everything goes to shit and said structure falls apart.

There’s a lot to praise in “The Immaterial Girl” (especially Clayton Cowles and his closed-captioning lettering for characters stuck in the TV world). Compared to the other entries in the “Phonogram” canon, it’s the one with the most immediate sense of stakes. Moreover, it’s the entry that really follows up on the series’s major theme of people defining themselves with media. Kohl, Bingo, and even that Dexys Midnight Rider guy have all tried to define themselves through other’s music with varying degrees of success. Now, it’s Emily’s turn. And this isn’t the type of problem that can be solved by listening to Los Campesinos! for the first time.

Final Verdict: 9.2 – A strong start for what might be the least “Phonogram” “Phonogram” yet.