Three cheers for double-shipping! Dan Jurgens and Doug Mahnke round out the final 100m of the ‘Superman Reborn’ relay that’s been sprinting through their book and “Superman” for the past month. Instead of closing out a run for the ages, “Action Comics” #976 tends to stumble across the finish line. And while there’s some fun to be had in the anchor leg, the best thing I can say is that at least we didn’t have to wait four months to get here. Be warned that there are some spoilers ahead. 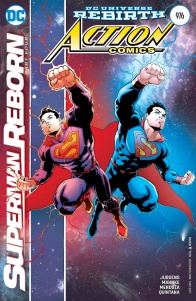 “SUPERMAN REBORN” finale!
As this epic tale wraps up, Superman’s life is drastically changed…and that’s all we are saying for now—except that you won’t want to miss it!

So we’ve made the end of Superman’s first crossover of the ‘Rebirth’ era. Everyone still holding on? Double-shipping ensured this event came and went with the speed of a weekly bullet aimed square at the hearts of the Superboy Prime truthers out there. Epic? Drastic changes? Hush-hush solicit copy suggesting that Superman’s life will never be the same again? I can’t really agree with the first two, but “Action Comics” #977 will be dropping in a fortnight, so I guess technically that third one is true.

But like the candy that Mahnke litters so prominently within the debris of the crumbling Daily Planet building where this issue takes place, the revelation of fake Clark Kent’s identity feels light. In retrospect, it feels like empty calories compared against the weightier meal that is Mr. Oz. It feel like child’s play. Maybe that’s why Jurgens has the world’s funnest imp from the 5th dimension become so obsessed with running off with Jon Kent in “Action Comics” #976. Because otherwise it just seems silly that Mr. Mxyzptlk would suddenly jump from wanting to erase a child to mess with Superman’s head to Mxy’s latest claim that Jon is his new bestie.

There are some leaps in the storytelling here that are as awkwardly handled as the faces that Mahnke frequently delivers with mouths showing either too much teeth or too much gum. Or both. Lois spends three-quarters of the issue in righteous disbelief that her and Clark could be married let alone have a child. Then suddenly, she chooses to believe Jon solely because, “He’s so genuine,” as if Jon’s unfettered idealism is a superpower of its own bordering on mind control.

Love conquering metaphysical, pan-dimensional peril is a well-recycled trope that really depends on a high-degree of visual flare to make the packaging seem new. But because Mxyzptlk’s universal facade is deteriorating back into nothingness over “Action Comics” #976, there’s not a whole lot to look at other than Mahnke’s overly posed character work. There are flashes of lightning, smoke and clouds, and splashes of color setting the backgrounds ablaze, but they’re more a case of colorist Wil Quintana trying to add flair to the scenes.

It’s a shame really, because the issue starts strong with a splash that channels the truly inspired Mahnke from “The Multiversity”’s one-shot ‘Ultra Comics.’ A fiendish Mxyzptlk with demented eyes bulging in anger – one a swirling vortex, the other a never ending spiral – points an accusing finger directly to the reader. “You, Superman, are a cheater!” the imp bellows.

But from the way he’s posed, there’s an implication that we as readers may be the ones accused. Given the rampant speculation that accompanied fake Clark Kent, Mr. Oz and a host of other mysteries to the Rebirth-era, it seemed that in closing out the most Rebirth-centric crossover yet, “Action Comics” #976 might seize an opportunity to get meta in addressing online theorizing as a kind of a cheat that somehow spoils the intended delivery of a story – or something to that effect. The reveal of the trickster imp as Clark’s doppleganger could have opened the door to any number of meta interpretations of the current Superman storyline.

But instead of continuing this thread and implicating the reader as part of the story itself, the creators pull back and place Mxyzptlk as merely another cog in a far greater wheel. ‘Superman Reborn’ follows in the grand tradition of Lost storytelling, where the answer given to us may be fun – and don’t get me wrong, I do appreciate a good yarn spun out to involve the purple-hatted mischief maker – but it’s not really the answer we’re looking for. Instead of an actual story, the issue amounts to the fading stomps of a pan-dimensional tantrum wearing itself out in between references to the mysterious, “Him”. And these references reek of withheld information in the service of manufactured intrigue.

Even more damning, is the lack of subtlety and room for interpretation in much of the dialog. There’s a panel in “Action Comics” #976 where Mxyzptlk describes, in detail, the contract he’d made the real Clark sign in the preceding issue of “Superman”, all while holding a copy of said contract that’s rendered with a typeface that’s clearly legible.

So, yes, love conquers all and there’s some realignment to the status quo. But that’s never the most original ending to a tale, and any electrifying ramifications in Superman’s world will take an extra issue or two to trickle down. Mr. Oz is still out there, which is, as it ever was, the greater mystery.

Final Verdict: 5.5 – What does it mean when a four-issue crossover went one issue too long?