What happens when a housewife and a hitman switch places? “Crosswind” is going to tell us. Read on for our review of “Crosswind” #1 but be warned, there are some spoilers throughout the review. 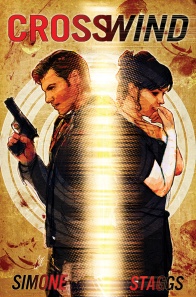 Gail Simone is a name that basically every comic reader knows. She’s written stories for some of comic’s biggest characters including much loved runs on “Birds of Prey” and “Batgirl.” Throughout her career, that’s pretty much where she’s remained. She was a staple at DC Comics for many years and now she’s taking the plunge into creator owned comics. After the success of “Clean Room,” Simone has brought her latest project with artist extraordinaire, Cat Staggs, to Image Comics. “Crosswind” #1 is a solid debut that only begins to touch the surface of where this story will bring us.

“Crosswind” #1 introduces us to two people who couldn’t live more different lives. Case is a hitman living in Chicago, carrying out the dirty work for mob bosses. When we see him first, he’s finishing up a hit on someone who has information he and his bosses need. Juniper is a housewife that’s constantly disrespected. Her husband thinks she’s an airhead, the neighbor boys say awful things to her and her stepson wants nothing to do with her. Their lives aren’t going the way they want and at pivotal moments, they end up switching bodies and lives.

“Crosswind” #1 is a book that tries very hard to sell you on the characters before it even tries to get into the bigger plot. For the most part, it does this but not in the way that you’d expect. Simone and Staggs don’t approach this in a conventional way. Usually with something that follows this Freaky Friday kind of plot, a lot of time is spent on showing how different their personalities are. You get things like “she likes rock music” and “she likes country music” or “she’s messy,” “she’s a neat freak.” Basically very generic, baseline kind of stuff is what these kinds of stories feature.

“Crosswind” isn’t like that and that’s why it deserves your attention. Case and Juniper not only are very different people but their situations in life are as different as you could get but also a little dangerous.  Case is dealing with a very sticky, violent situation that he has to try to get out of and as far as I see, Juniper is being abused. She may not be dealing with that on a physical level, but between her husband, his cheating and the boys next door, she’s in just as much of a bad situation as he is but in a different way. They are both in situations that aren’t easy to get out of and switching lives will just make things even worse. This approach makes “Crosswind” #1 feel unique and something I feel compelled to stick with.

“Crosswind” #1 however suffers from being just a tiny bit thin as far as the plot goes. If you jump into this without having seen any of the publicity, you don’t actually know what it’s about until the last 2 or 3 pages. It’s just these people living kind of garbage lives without much of an escape until the switch flips and it becomes something else. One of the biggest problems with a lot of first issues lately is that they are teasers which to an extent, is exactly what a first issue should do, but it shouldn’t be scared to give just a little more away. It doesn’t make “Crosswind” #1 a bad comic, it’s just one that asks you to stay for the ride and I can’t begrudge it too hard for that.

Cat Staggs has one of the more unique art styles in comics right now. Her work reminds me of Adam Hughes but with far less sexualization and more experimenting with colors. “Crosswind” #1, overall, is a really good looking book. Staggs has some fun with panel placement and very rarely is there a page without subtle overlapping. I like this because I think it helps “Crosswind” get a look all of its own. One of the big tasks that Staggs has in this first issue is making Case and Juniper real and very different people. The pages featuring Case are like something out a sleek action movie. The first couple of pages in the snow are detailed and feel frosty through her excellent use of whites and blues and the cold, calculated mannerisms of Case. As his part of this story goes on, things take on a grittier feel. There are darker oranges and reds used throughout Case’s story and it kind of reflects the violence and darkness in his life without going deep into dark blacks and blues. It’s less obvious this way and I like that. Case’s pages are also full of this great style and confidence in how the characters look and act.

On the flip side, when we get into Juniper’s side of things, “Crosswind” stays a bit on the darker side but in a different way. Juniper is an actual desperate housewife. Staggs draws Juniper as a visually unsure and scared woman. She’s going through a lot in her life and the added stress from this huge dinner makes it all worse. She’s told her husband might cheating on her and so, Staggs lets that kind of read all over Juniper. She’s very awkward and uncomfortable but is honestly trying her best. The way Staggs conveys this in her body language is so fantastic and is really the best work she does in this issue. Unlike Case’s part of this issue, the characters here are a lot more animated. Some of it can read a little too big but it all comes together to work really well. This feels like the suburbs. The real suburbs, where everyone isn’t actually as nice as they want to come off. The coloring here too really clicks as it’s much brighter but because of the context in what’s actually happening, it feels darker than it looks.

“Crosswind” has a ton of potential going forward if it avoids falling into the pitfalls that often brings down these kinds of body switch stories. Simone and Staggs have something here and I’m eager to see where it goes.

Final Verdict: 7.5 – All set up to the chaos that’s soon to follow these two characters, but does more than enough to get you on board with where it wants to go.