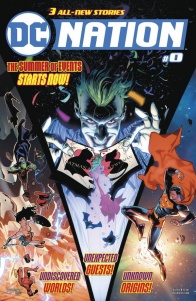 Just in time for Free Comic Book Day, this special comic priced at just $0.25 US features three brand-new stories from a lineup of superstar talent—and each tale serves as a prelude to some of the biggest DC events of 2018!

First, find out how The Joker reacts when he discovers Catwoman has turned her back on crime and plans to marry his archnemesis. Can the Clown Prince of Crime stand to see Batman happy? Writer Tom King and artist Clay Mann set up the events that lead to BATMAN #50!

Then, DARK NIGHTS: METAL shook the DC Universe to its deepest foundations—now it’s time to rejoin legendary writer Scott Snyder, along with all-star artist Jorge Jimenez and co-writers James Tynion IV and Joshua Williamson, for the prelude to JUSTICE LEAGUE: NO JUSTICE! Discover what universe-shattering mysteries have emerged from the most wondrous and chaotic corners of the cosmos to hunt the Justice League in DC’s summer blockbuster event!

And get your first glimpse at Superman’s new world in this exclusive preview of the upcoming six-issue miniseries MAN OF STEEL, written by Brian Michael Bendis with art by José Luis García-López. With Truth, Justice and the American Way all under attack, both Superman and Clark Kent find there’s never been a more important time to stand up for what they believe in.

The best of the stories is the Joker interlude for “Batman” written by Tom King. By utilizing awkward pauses and pun-infused jokes, King manages to keep to his time-tested mixture that keeps suspense high while allowing the reader some room to breathe and laugh alongside the maniacal serial killer and his utterly bizarre methodology, even as he torments the poor civilian with his rather . . . different logic about how to get a wedding invitation. In general, the entire plot works precisely in how weird it all is, helped in no small amount by the fact that the crime is happening in the daytime, unusual for most Gotham villains in general.

While King helps to keep a careful balance, Clay Mann’s artwork, with its soft pencils and utterly terrifying faces, acts as a way to even further keep readers on their toes, from the calm and semi-rational ramblings of the Joker and the pitiful pleas of his victim to faces that would fit well in nightmares. In fact, when contrasted against a relatively normal face and mannerisms of the poor Gothamite, Mann’s artwork on the Joker crosses deep into the uncanny valley, visually disturbing to a point that he seems almost inhuman in addition to being inhumane.

Jordan Bellaire’s colors help to augment the surface normality of the situation. Joker’s garish green hair and purple suit clash well against the browns and greens of the home in which he has placed himself.

Unfortunately, that highlight is followed immediately after by the worst of the three, a take on Superman by Brian Michael Bendis, relatively newly arrived from Marvel Comics and beginning his miniseries on the Last Son of Krypton, “Man of Steel,” with this story. Bendis appears to have taken his love for overwrought, overwritten, repetitive dialogue with him, and this is no better seen than with Perry White’s overdone love of giving speeches for anything and everything (with way too many mentions of a need for only the truth about Superman), instead of just going off to do his job and let everyone else get to theirs. This isn’t to say that he is the only victim, as the new antagonist also has far too much David Mamet-style speech, and Clark Kent himself isn’t too far behind, even as he internally tries to tell his boss to stop talking in a kind of internal story hypocrisy that is funny for all of the wrong reasons. Overall, this mini-story doesn’t prove to be a good sign for Superman’s writer going forward, especially given that Bendis has taken the reins on both of his main books.

José Luis García-López provides pretty good art, but the rather distinct lack of distinction between facial features from afar can be a bit distracting. García López does his best to follow-up the needlessly overdone dialogue with up-close facial expressions where possible, and does a pretty good job of that, but sadly it can’t cover for everything.

Alex Sinclair also tries his best, but use of different shades of color to showcase shadow versus light inside of the Daily Planet offices, the soft oranges of the Metropolis skyline, and the lively hues of a nightclub can’t make up for the rest either.

Following up from their work on “Dark Nights: Metal,” Scott Snyder, James Tynion IV, and Joshua Williamson come together for an introduction to the world of “Justice Leauge: No Justice.” Much like its predecessor, the story seems to be completely crazy, in all of the best ways. Helping to set up the teams to come in the most basic senses, spelling out the conflict (as similar to Marvel’s Celestials as it may be). Together, it forms a fun romp that gives added reason to look in on the coming storyline. On the whole, this wacky, ridiculous introduction is enough to entice people to come and see what it’s all about, with more than a hint of universal cosmic horror and urgency.

Jorge Jimenez covers the art for this story and it all comes together in a style akin to a Saturday morning cartoon, with white outlines around characters specifically to highlight them for their introduction alone, then not afterwards. Use of shadow and light are both important, especially when it comes to distinguishing between the different locales of the different Justice League teams, let alone the darker, more solemn atmosphere on and around Earth itself.

Still, the highlight of the artwork on this part of the issue is in the colors, provided by Alejandro Sanchez. From the subdued, oppressive red lights and shadows in Batman’s scene to the over-the-top color schemes of yellows, blues, purples, greens, reds, and what have you and more, the styles here are varied enough to distinguish the different areas despite having no real basis to discern where they actually are or their importance in the overall plot.

Good news: Batman is still on track with Tom King and a host of talented artists and colorists. Bad news: Superman is also still on track, but not in the way many may want. Weird news: “Justice League: No Justice” is… exactly as bizarre as anyone could have hoped.

Final Verdict: 7.0– Though dragged down by a poorly done Superman interlude, the three previews in “DC Nation” #0 are worth the price of admission and then some.