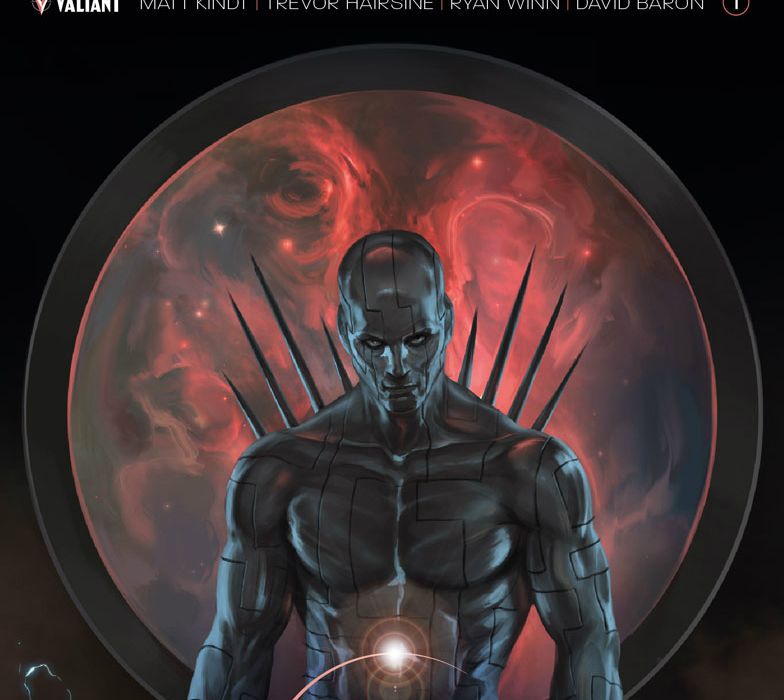 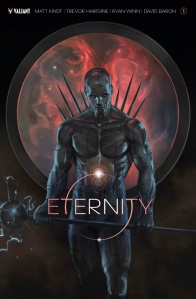 This October, Valiant unveils a new plane of existence beyond our own and unleashes a universe of new worlds, new beings, and new myths…

What I love about this book, and I suppose this is comment on the Valiant Universe as a whole, is how contained it feels. Kindt ensures that this comic, even as a successor to the “Divinity” comics, feels like something that anyone could pick up and enjoy. And this doesn’t feels like it’s relying on worldbuilding beats of the rest of the Valiant line to be enjoyable. What’s here is progressive and interesting – something that I recognised just from seeing the preview pages way back when. We get a very human Abram playing with his newborn, which makes for very intimate, family oriented moments. Straight after, though, Kindt sends us into the Unknown, a place with abstract, almost Dali-esque environments, and the whole setup is just so well executed.

Kindt provides us no context for this setting. We’re given no slabs of text regarding background of this wild new environment, nor are we given rules. And it’s so refreshing. Kindt understands the appeal of the unknown here, as the environment, the Unknown, borders on absurdity anyway, so what point is there in rationalising it? It feels like a call to the best parts of 60’s Lee and Ditko “Doctor Strange”, with a bold, uncompromising voice that is updated to come through the dialogue instead of dated narration. But Kindt works hard at balancing the absurd with the grounded elements of the story.

At its core, from what I can gauge in this debut, this story revolves around Abram searching for his missing child – emphasising the human aspects of this godlike superbeing. Kindt plays this off well, underlaying a subtext about how Abram may function as an all-powerful superbeing, but he’s still flawed, he still loses his child, and this still causes him to act aggressively in emotional outbursts. He’s fundamentally human, and as an audience, maybe even moreso parents, can relate and emphasize with his current struggle. But the subtle, smaller characters feel well fleshed out, too. David Camp, the prophesizing fanatic of Divinity, feels shunned when Abram ignores his religious outbursts to instead look for his child, and Kindt conveys the disappoint to alarming effect. What’s even more interesting, is when Camp experiences this, and conveys ‘He was… He is… Fallible’, reflecting the core idea about Abram’s humanity.

In the past, “Divinity” has always gone for a hybrid of cinematic and classic superhero comic art styles, something which artist Trevor Hairsine has always been able to convey greatly. But Hairsine brings some serious space psychedelia to the art style in this issue. Environments and background settings are lush and full of life in “Eternity”. You get that subtly from the Ugra National Park of the first few pages, with the very wholesome wooden shack in lively Russian woods that Abram lives in. However, it’s in the ‘Unknown’ location that Hairsine really steps up to bat. Hairsine gets to combine literary and pop-art influence, depicting the tragic death of The Observer on a long set of stairs. However, this is taken to its logical extreme, as the camera pulls back on the stairs to reveal they scale a huge, almost completely vertical cliff edge of a space-age plateau. The shots with the black and green stairs closeup have hints of Warhol and Lichtenstein, and it’s really fun to see the styles grafted together with this psychedelic comic book.

Due to the pseudo-cinematic nature of Hairsine’s art, it’s easy to see that he understands how to really amp up the emotive scenes. As with my look at Kindt’s writing in the first scene, Hairsine structurally does a solid job at amplifying how pure and human the moment between Abram and his son is. Once you get inside the humble Russian abode, Hairsine pairs it back on the setting and telling details – choosing to use more negative space for a more emotional effect. All that Hairsine focuses on is the building blocks they were playing with – and that gives us more telling details and emotion than is needed with a realistic background. Later on in the issue, we see Abram freeze with fear upon finding that his child is missing, and that’s made all the more weighty from the connection made in the first scene. But the tension is supported by Hairsine’s facial work here – we see the superpowered part of him with his eyes lighting up, but we see the human aspect as Abram switches from concerned parent to vengeful father in the space of three panels.

David Baron provides some really lush colors to this issue, and frankly, the Unknown sections of the comic would be nowhere near as effective without them. Getting straight into that, the flat green against black of the staircase in The Unknown is stark and beautiful – something that portrays the unique nature of the environment, but the use of green conveying that something sinister has taken place. The combination of overly vibrant colors on the splash page gives such an otherworldly look that reminds one of classic Jack Kirby “Fourth World” content. But I would be remiss in ignoring the earthly moments too. Baron works well at contrasting the pleasant simplicity of the mundane Earth against the Unknown. The lighting is soft and cinematic, and works especially well whenever Abram uses his magical sparkly eye trick. But I love most whenever deep space is rendered – we get an almost photographic level of realism, but Baron still infuses it with that Kirby psychedelia that this issue conveys so well.

“Divinity” was a huge success for Valiant, and by the looks of things, “Eternity” seems to be carrying the torch to great avail. Kindt and Hairsine push their already interesting universe to new directions, all the while homaging the greats like Kirby and Ditko. You need to pick this one up.

Final Score: 9.2 – “Eternity” #1 is not only a great continuation of an excellent series, but a perfect jumping on point and wonderful psychedelic exploration that’s beautifully human at its core.