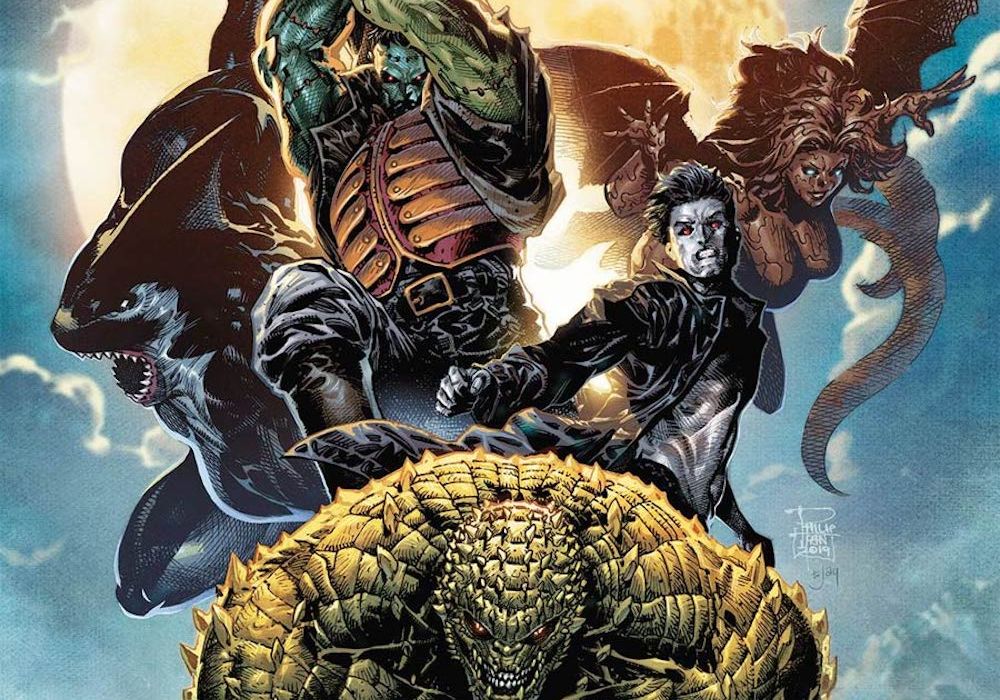 Whatever happened to Monstertown, the district of Gotham City formed in the wake of the 2016 ‘Night of the Monster Men’ crossover? Find out in the first installment of the “Gotham City Monsters” miniseries! 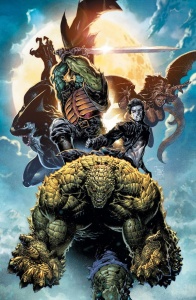 Leviathan has dismantled S.H.A.D.E.—and that means Frankenstein is once again a free agent! Now he can set his sights on his former mentor, Melmoth, the one evil that got away. With bad things happening all across the Multiverse, this may be Frankenstein’s last shot at setting things right. Of course, Melmoth has his own agenda, and it’s going to take more than a lone monster to take him down. So Frankenstein heads to Gotham City in search of allies and recruits Killer Croc, Lady Clayface, Orca and vampire Andrew Bennett. But will even these dread creatures be enough to save humanity before the entire cosmos collapses in on itself?

When it comes to Gotham City, terrifying villains are borderline normal. However, a select few actually can be considered “monsters” that are so divorced from human appearance as to be reviled by all. Furthermore, the safety of said monsters has been endangered by the destruction of the Super Human Advanced Defense Executive (S.H.A.D.E.), the only government agency that actually concerned with them, in the yet-ongoing “Event Leviathan.” With all of this in mind, Steve Orlando seems geared to re-contextualize the status of less overtly human creatures around Gotham itself, creating both a society of sorts and a different kind of threat for the relatively lawless district that is separate from most of the traditional Bat Family rogues galleries.

Most important about a miniseries like this one is its accessibility. Orlando alludes to events going on in the related comics, from “I, Vampire” to “Suicide Squad” to “Event Leviathan” to two separate arcs in Tom King’s “Batman,” but the way in which he writes about them allows for just enough information to gauge a general time frame without making said timeline actually all that important either. All of the information anyone actually needs to know is within the pages of “Gotham City Monsters” #1 itself, rendering it less a tie-in or a spin-off than a story in and of itself.

In Monstertown, each of the monsters needs to survive on their own, law and order be damned, as “civilization” won’t come to help them. Every one of the protagonists has space to demonstrate how they weave their way into this chaotic tapestry of a culture to become part of the wider story of “Gotham City Monsters” and the DC universe as a whole. From vampire Andrew Bennett to famous walking corpse Frankenstein to three separate formerly human-looking sometimes villainous mortals, everyone gets some time to shine and show their place in Monstertown, establishing their lives over the course of a few pages each so as to keep readers from being too confused by who is who, even if they are new to these people. The initial reason why they would ever work together isn’t immediately evident, but becomes clear over the course of the tale, with particular focus on Bennett and Frankenstein for the time being.

Even when the imagery provided can delve straight into utter horror, there are still moments of other emotions in Orlando’s script. After a foe is immolated in a bar, the perpetrator calmly takes a seat in front of their still-burning, fresh corpse and orders a drink, the framing allowing for a laugh at the sheer black comedy of the situation. A backstory can be enough to elicit extreme sorrow for a woman who just wants to be with her family again, though she is a villain to most of Gotham in one way or another.

Amancay Nahuelpan’s artwork makes for an interesting style that merges smooth, straightforward artistic decisions with darker, more serious, horrifying appearances and angles to create a look that integrates the monstrous society with the workings around Gotham itself. Humanity and inhumanity between the superficially non-human both can be seen in the focus on eyes, with the expressions in each panel providing a glimpse of madness or other less hostile (or at least less malevolent) responses. The shadows of night in Monstertown are deep indeed, and Nahuelpan gives extra emphasis upon them at times, especially across faces, to enhance a sense of foreboding even beyond that of the traditional night in Gotham City.

Using perspective, the artwork takes on a similar appearance to classic monster tales of following prospective victims before showing the monster in action, such as in the cases of Frankenstein, Orca, and Lady Clay, helping to show the fear they instill in others due to their more limited interaction with the rest of the city. By contrast, Bennett is first shown in the midst of combat at the same time as his foes in a wider shot, displaying a further separation from humanity as well as a heavier concentration on his authority rather than his fear-inducing presence. On another hand, Waylon Jones is shown first by himself walking along without any attention to possibly scared individuals in order to examine his life while he tries to abandon his identity as Killer Croc in the wake of leaving the Suicide Squad, one of the few cases of someone trying to regain their sense of who they are without engaging in heroism, or at least vigilantism of any sort.

Trish Mulvihill’s general color palette has a relatively dark mood, even if the hues and shades are not literally darker. From a palette belonging to the shadows for the protagonists to a brighter, sickly green for the antagonists’ powers, the colors seem to indicate that there is something intrinsically wrong about light in Monstertown, with illumination borderline harsh and uninviting or even dangerous to add to the concept of the district being that of the monsters in the dark. The brightest of lights even cast deep, terrible shadows over surroundings as shown in Nahuelpan’s artistry, hinting at malevolence or general violence. The unwelcome nature of the light is further hinted at with outlines, even symbolic auras of yellow and orange heat around protagonists when used as the focus of a scene, as if both to show them as heroic against the worse things in the dark and to examine how they can be an affront to the natural disorder of the district for many.

Final Verdict: 8.0– A very good introduction to the monstrous side of the DC universe and how it is a relatively different issue from the mundane and mystical elements that permeate much of the comics otherwise.