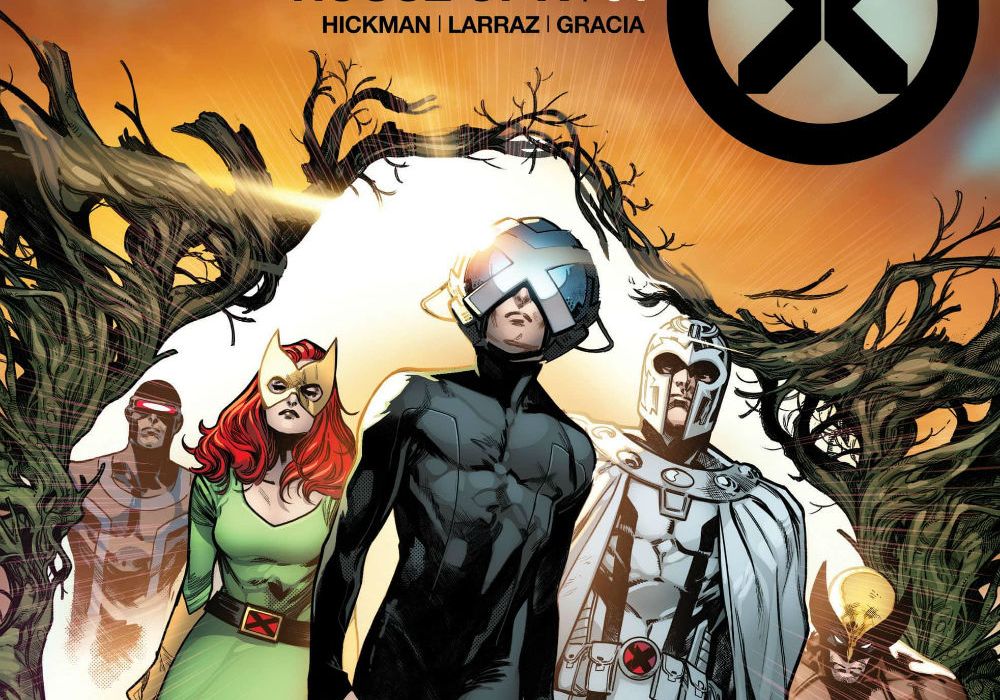 If you ask Marvel fans what some of the biggest stories of the last decade have been, chances are they’ve been written by Jonathan Hickman. The man isn’t afraid to move and shake the status quo in ways that are immensely satisfying to watch unfold. Hickman now stands to shake up the X-Men line with “House Of X” #1, with artist Pepe Larraz, colorist Marte Gracia and more in tow. Will this be as much of a hit as his last work, or will Hickman’s attempt to reinvigorate the X-line fall short of superstardom? 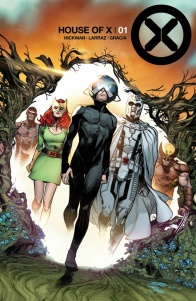 FACE THE FUTURE. Superstar writer Jonathan Hickman (SECRET WARS, AVENGERS, FANTASTIC FOUR) takes the reins of the X-Men universe! Since the release of Uncanny X-Men #1, there have been four seminal moments in the history of the X-Men. Giant-Sized X-Men. X-Men. Age of Apocalypse. New X-Men. Four iconic series that introduced a new era for Marvel’s mutants and revolutionized the X-Men. In House of X, Charles Xavier reveals his master plan for mutantkind…one that will bring mutants out of the shadow of mankind and into the light once more.

Few will be surprised to hear that Hickman’s worldbuilding is on point, but what you might be shocked to hear is the extent of how much new stuff Hickman gives us in this debut issue. Hailing back to the iconic “Giant-Sized X-Men” #1, Hickman makes the mutant island Krakoa a very central part of this issue, insofar that it has become not only a peaceful habitat but and economy and system of transportation for mutants globally. Omega-level mutants (now actually a definable power level, thank you Hickman) now are treasured as infinitely renewable sources of energy and have been used with Krakoa to create natural pharmaceuticals that are used as currency, as they work as super-pills for humans. Damage Control, the former comedic group that cleaned up after major superhuman catastrophes, now contain and store superweapons like Tony Stark’s Satellite-based laser, Sol’s Hammer. Hickman has created a wild new world for the X-Men to play in, and dropping readers in the deep end to piece everything together is endlessly satisfying.

Then we have characters. The two strongest voices in this comic are, unsurprisingly, Magneto and Cyclops. For the former, Hickman has developed a voice that feels like such a natural culmination of everything in his history, whilst keeping him fresh and interesting and true to his manipulative origins. Magneto getting to be the smarmy, charming ambassador for Krakoa that meets and greets the human politicians feels like a nod to Ian McKellen’s portrayal of the character, whilst his respect for Xavier’s attempt to truly generate a mutant culture feels like a natural evolution of the more grey-aligned Magneto seen in the mid-’80s Claremont run. Cyclops, on the other hand, has comparatively less dialogue and screentime, but each moment he gets is satisfying in it’s a subtle nod to his complicated and storied history. I won’t spoil it, but in his conversation with Sue Storm late in the comic, he delivers a few scathing remarks that will have X-Fans cheering and rejoicing for the injustices visited on their franchise in recent years. Unfortunately, the rest of the cast is so diverse that not everyone gets as much of a chance to shine as these two, and so beloved characters like Mystique or the Stepford Cuckoos feel like the most essentialized versions of themselves. Nonetheless, Hickman balances character well, giving the heavy hitters fresh and interesting voices whilst keeping true to the complicated and often contradictory history of “X-Men”.

Visually, it’s not a stretch to say that Pepe Larraz lives up to the lofty expectations of being the artist on a Hickman book and then keeps on delivering. Larraz’ art style has a distinctly shiny-clean and cinematic look that fits the reboot tone of the book superbly and plays off of Hickman and designer Tom Muller’s intermission work nicely. Environments are detailed and fully realized from the moment you open this book, adding as much intrigue and depth to the story as Hickman’s narrative does. The first scene, with an enigmatic Charles Xavier greeting freshly born mutants from mucous cocoons growing by a terrifically biblical-yet-alien-looking tree, does as much heavy lifting for some of the later parts of the story as Hickman’s infamous charts do. Larraz keeps this visual motif of nature overcoming manmade structures throughout the entire story to remind the reader of the inevitability of mutants. Trees are growing over skyscrapers, Krakoa’s eyes and vines twist through a futuristic computer lab, and waterfalls cascade down jutted concrete paths, and it all looks vibrant and beautiful rendered by Larraz.

One of the more persistent themes of this book is that mutants as a species (or sub-species, if we’re getting technical) are taking a more aggressively elevated stance over humanity, and this is well realized in the way that Larraz handles body language and choreography. The way that Xavier dances in the Krakoa garden at the beginning of the book, he looks like a carefree deity mingling with a lesser race. Magneto’s stance whilst escorting the human politicians is one burdened with power, but with a dismissive air as literally looks down upon those around him thanks to Larraz’ clever camera angling. It’s subtle, yet we’re seeing mutants almost painted as deities rather than like regular human beings. Larraz uses body language and pacing impressively even in smaller-scale scenes, too. When Cyclops confronts Reed Richards, there’s a moment when the two make statements at odds with each other. Larraz lets the sequence stew with tension, giving us two full silent panels of each leader puffing their chest at each other before Cyclops break the ice, smirking subtly with a tauntingly clever remark about Richards’ iron will.

This book pops with psychedelic science-fiction vibrancy, with Marte Gracia giving it the otherworldly spice it requires. The Xavier/Krakoa scene at the beginning of the book prepares you with all the expectations you’ll need for the rest of the book, giving us a scene with cold, magenta-toned tree spotted with glowing bronze capsule-like seeds, showing readers that already, not even nature is how it should seem. Even then, however, readers will be struck by how breathtaking some of these scenes are. The forest area that Jean Grey and her student accompaniment stumble upon is a spectacular palette of blues, purples, golds, reds – a veritable rainbow of color that all blends smoothly into each other whilst highlighting Larraz’ attention to environmental detail. Gracia even makes the comparatively dull city scenes exciting, by comparison, using the bland industry-scape to contrast the vibrant cast of the Fantastic Four leaping from rooftop to rooftop with glistening oranges and blues. Gracia’s colors not only make this a vibrant visual spectacle, but a weird and psychedelic one unlike few other superhero books in Marvel’s lineup.

Believe the hype, because “House Of X” #1 is as big and as boisterous a spectacle as it claims to be. Jonathan Hickman has a blast updating and reworking the status quo to a wildly unique take on the “X-Men” mythos, yet still retaining the spirit of the team and some of it’s oldest characters. Pepe Larraz and Marte Gracia give the book a super clean and slick style, bringing the Marvel Universe a crazy, almost alien aesthetic, and visual work that boosts the narrative as much as the sleek designs from Tom Muller do. The “X-Men” are good again, folks.