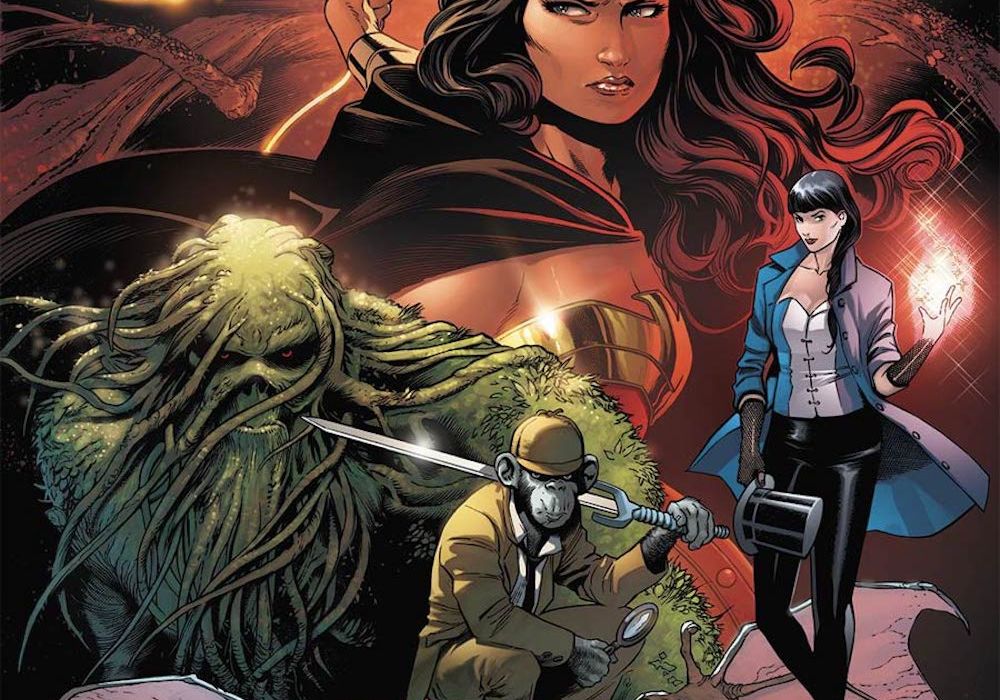 Though far less “dark” than the series that originally gave its name, “Justice League Dark” is shaping up to be an interesting look into the mystical corners of the DC Universe. 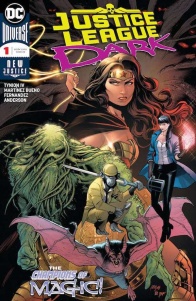 From the pages of JUSTICE LEAGUE: NO JUSTICE! Earth’s magic once belonged to them. Now they want the magic back. But who exactly are they? It’s up to the new Justice League Dark to find out and stop this nightmarish new threat at all costs! After the events of NO JUSTICE, team leader Wonder Woman guides the misfit magic mix of Zatanna, Swamp Thing, Man-Bat and Detective Chimp against enemies too fantastic even for the Justice League. Plus, what awful things are coming through the Tree of Wonder? Dark days ahead…

The story of the Justice League family of comics coming out of “Justice League: No Justice” has been excellent, with a paradigm shake-up courtesy of that creative team. As a part of that creative team and no stranger to bringing bizarre happenings and multiversal consequences into his writing, James Tynion IV brings the creative spark of the main “Justice League” comic to “Justice League Dark” #1, showing that the interesting, intriguing ways that the DC Universe reacts to the fallout from “Dark Nights: Metal” come in a variety of places and forms, not in the least being the realms and machinations of magic, the “wonder” of the DC Universe itself.

Tynion crafts an amalgam of stories with Wonder Woman and Zatanna Zatara at their cores, creating a collection of different stories, from the wide, sweeping breadth of Wonder Woman’s influence to Zatanna’s more down-to-earth approach to the mystical realms and the various heroes connected to them.

Aside from the characters themselves, the representation of heroes and villains shown by Tynion demonstrates further knowledge of the multifaceted nature of the mystical world in DC Comics. From Wonder Woman’s more physical approach to mysticism, to the urban magics of Traci Thirteen, to the infernal, celestial, and arcane forces gathered at Wintersgate Manor, home of Baron Winters of the Night Force and much more in characters or cameo artifacts, there is scarcely a piece of the realm of “wonder” left untouched, especially once the mystery of what is wrong with magic itself comes to the fore.

Despite the issue seeming at times to be a general overview of magic in the DC Universe as a lead-in to this opening arc, ‘The Last Age of Magic,’ each character has his or her place, from the scientific mind of Kirk Langstrom to the investigative work of Detective Chimp to Swamp Thing’s intrinsic connection to the workings of the planet itself. Tynion uses the introduction wisely, with briefly divergent investigations into the havoc wreaked on magic bringing a detective story with an autopsy together alongside a more cognitive, psychological journey, both of which delve deep into the realm of mystical, almost cosmic horror.

Most importantly on the writing front, “Justice League Dark” #1 features a mixture of different emotional beats, completely different tones that somehow work together well. Zatanna’s emotional distress at her ability to find use in a world of increasingly wild magic balances well against the more sobering, at times sarcastic depression brought forth by Detective Chimp and Traci Thirteen. Kirk Langstrom’s excitement around the mystical wing of the Hall of Justice adds a healthy dose of comedy, while the introductions for the Otherkind and the Upside-Down Man bring everything back to a state of absolute, existential horror.

Alvaro Martínez Bueno presents a dynamic art style for “Justice League Dark” #1. While it is not overly disturbing in and of itself, unlike some other overt horror books, the way in which things like mouthed tentacles and flashes of mystical power are shown lends more toward the idea that magic is, while bizarre and fascinating, still technically a part of the world itself, and by not putting too much emphasis on making the mystical side of life otherworldly, it becomes all the more disturbingly uncanny in a way that outright squid-headed aliens or the like would not elicit as much of a response.

On the other hand, the use of the familiar helps to humanize these characters, even those who are no longer human (Swamp Thing) or have never been physically human at all (Detective Chimp). When Zatanna approaches Swamp Thing with a shining light behind her, the impression is one of a very normal sunrise, rather than a mystical light, giving an added “nature” feel to the Swamp Thing and a more warm, happy feeling that would come with the arrival of the heroine herself. On the other hand, a similar light presented with Zatanna’s mystical visions gives a more eerie, unsettling, even somewhat painful feeling, as if looking directly into the sun itself, rather than just at someone framed by its rays.

Brad Anderson’s colors are an important part of “Justice League Dark,” giving the overall feel for this series to come. The darkness of Wintersgate Manor and its outer gates show the workings of magic from the shadows with an emphasis on light from below to give the impression of a larger shadow. While the Oblivion Bar has a similar atmosphere, it has just enough light from above, just enough color in the form of a variety of imagined scenes like the Tree of Wonder, to give a more positive impression of its characters beyond “the mystical forces that are trying to help without any outside influence at all.” Oranges, deep purples, greens, and fleshy reds rule the day in terms of general used colors, overall giving a the feeling of a natural world with a nasty undercurrent, but not nearly to the same degree that the first “Justice League Dark” series did back in 2011 through 2015.