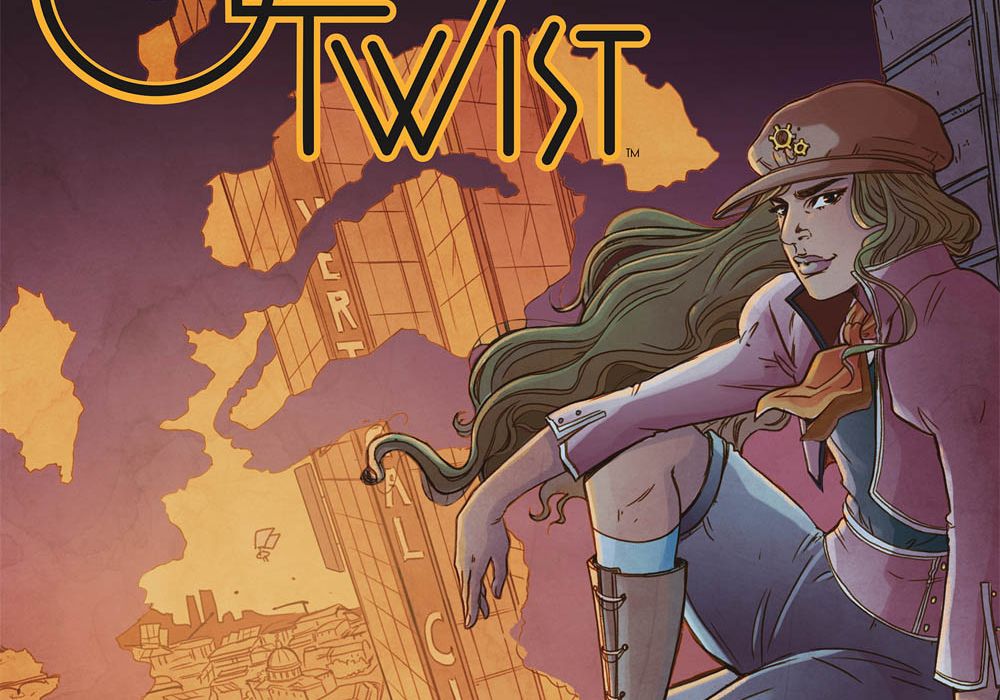 “Olivia Twist” is the latest series to join Berger Books, the excellent imprint helmed by comic book legend Karen Berger. Its own solicit identifies it as “A Girl Power Epic!” The first issue works hard to be worthy of that claim, but truly that is only scratching the surface. “Olivia Twist” is a busy book. Though it is rooted in a familiar story, the sheer tonnage of its ambition threatens to overwhelm. 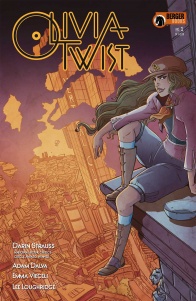 To save a boy she barely knows, teenage orphan Olivia Twist joins the Esthers, a rag-tag girl gang of thieves running free in a dangerous future. Olivia’s life in this London of internment camps and dark technology gets even more complicated when she discovers that she has more power and wealth than she’s ever dreamed of. But it comes at a great cost.

A brief list of things “Olivia Twist” is trying to accomplish. It’s a retelling of the Charles Dickens classic. But gender-swapped. And cyberpunk. It’s also a politically charged dystopia. That’s a lot of newsboy caps for one book to wear, but author Darin Strauss and red hot artist Emma Vieceli do their damndest to make it all work. The issue never goes off the rails, but there’s a lot of comic in this comic.

And you know what? That’s really cool! The general rule tends towards decompression, so when I find a comic with the guts to cram a lot of story into twenty-some pages, I give points for sheer audacity. The issue begins in a government camp (“A Place For Guests”). A hijab-wearing scientist, harassed by the other prisoners of the camp falls for a handsome doctor who respects her work. A steamy love affair, a tense escape, and a few gunshots later, Olivia Twist is now an orphan.

Eighteen years later, Olivia is aging out of the orphanage (which is really just a camp of enslaved orphans doing unpayed labor) and getting ready to enter the workforce, which will just be more of the same. This is where the comic most resembles the source material. Mr. Bumble, “Please sir, I want some more,” and the eventual escape from the orphanage are very familiar. Then we meet Artful Dodger.

Up until this point, “Olivia Twist” is dreadfully dreary. The horrors of Dickensian industrial Britain are easily downplayed when they feel like a relic of the past. By modernizing the story and rooting it in the too-familiar ills of the day, the story loses a bit of its mythic feel. Instead, it reads like a dramatization of real tragedy, and while the story is well told, it’s a bit hard to stomach.

Dodger changes all of that instantly. She steals the show. She’s big, brash, cool, and well dressed. Her quips are rapid-fire and they all land. Vieceli clearly loves drawing the blue-haired thief as much as Strauss loves writing her, and that love come across in spades. She’s somewhat incosistently rendered, but then again, she seems like a somewhat inconsistent person. In some pages she looks like a big bruiser, other times she’s a compact scrapper, and still other times she’s a graceful burglar. Olivia immediately falls for Dodger, and so does the reader, and that’s where the story really starts to click.

From there it’s a stolen piece of bread, a dash through a cybernetics workshop, and a makeover before Olivia is invited to join the Esthers, an all-girl street gang answering to Fagin. Here, Fagin is a one-eyed freckled woman with a mysterious smirk, but that’s mostly left to be picked up on next issue.

So will you like “Olivia Twist?” Statistically yes. It’s doing so much, so well that you’re bound to like some parts of it, even if the whole package isn’t your cup of tea. I for one have loved the story since having a bit part in the musical “Oliver!” when I was little. On the other hand, I’m pretty exhausted of dreary, racist, authoritarian dystopias. Maybe you feel the opposite. Whatever the case may be, the story captures the fun parts of the original thoroughly enough to make the story seem fresh.

It also shouldn’t go understated how genius it is to connect Dickens to the present. A few years ago it was much easier to think about orphans breaking their fingers in smoke-choked factories as a thing of the past. Now, with caged toddlers being a common image of the nightly news, it’s time for us to get deeply critical of our superiority to Victorian London. “Olivia Twist” makes that connection, and occasionally, makes it with style. If Strauss, Vieceli, and company can keep this up, Berger Books may have another hit on their hands.

Final Verdict: 8.5 – The dreary smokestacks of Victorian London have never felt so tangible. Good thing a blue-haired Artful Dodger is here to lead us into the Cyberpunk Revolution.