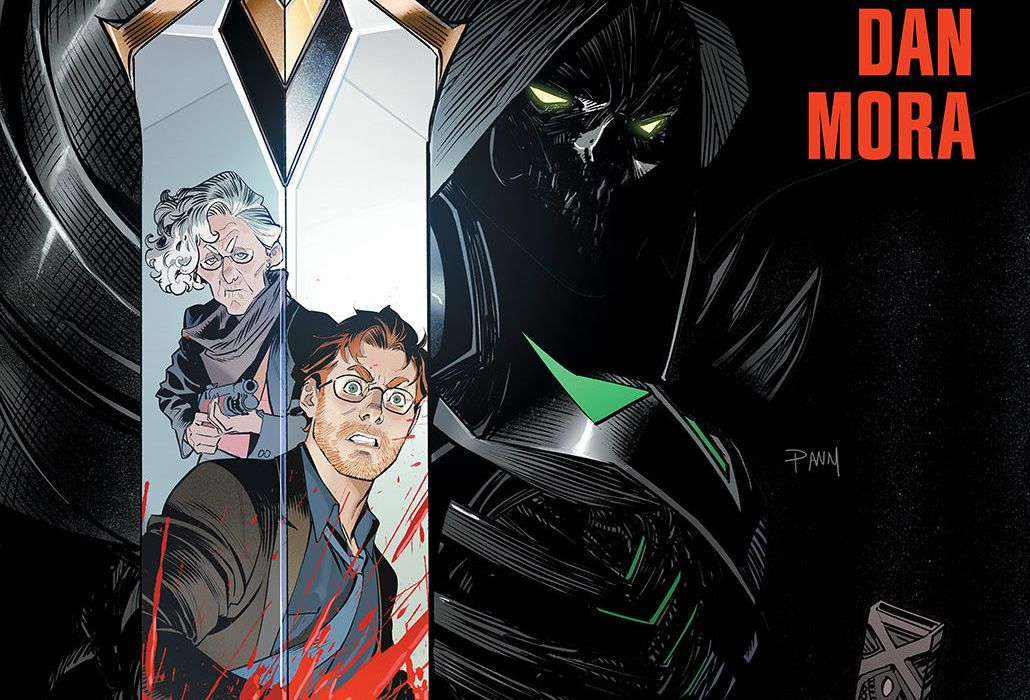 When I was younger, I thought that my father was a secret agent. You see, he was enlisted in the Navy and his work was strictly ‘classified’. Even my mother doesn’t know what he did. Logically, I know it was probably something boring to do with computer systems but in the imagination of a child? My dad was a mix between Batman and James Bond. So…basically Black Panther. Of course, now I know that dad’s wasn’t living some extraordinary, secret double life. Well in the pick of the week, “Once & Future” #1, Duncan McGuire learns his unassuming grandma actually is living an extraordinary, secret double life. Poor Duncan. 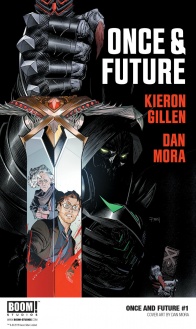 Written by Kieron Gillen
Illustrated by Dan Mora
Lettered by Ed Dukeshire
Colored by Tamra Bonvillain
When a group of Nationalists use an ancient artifact to bring a villain from Arthurian myth back from the dead to gain power, ex-monster hunter Bridgette McGuire escapes her retirement home and pulls her unsuspecting grandson Duncan, a museum curator, into a world of magic and mysticism to defeat a legendary threat. Bestselling writer Kieron Gillen (The Wicked + The Divine, Star Wars) and Russ Manning Award-winning artist Dan Mora (Buffy The Vampire Slayer, Klaus) explore the mysteries of the past, the complicated truths of our history and the power of family to save the day…especially if that family has secret bunkers of ancient weapons and decades of experience hunting the greatest monsters in Britain’s history!

In this issue, a shadowy organization looking to take back England steals the scabbard of King Arthur’s legendary sword Excalibur. When retired monster hunter Bridgette McGuire hears this, she realizes that they’re probably trying to resurrect the once and future king. The senior citizen decides to break out of the retirement home to stop them and drags her grandson Duncan down the rabbit hole of magic and monsters.

There’s probably always some extra pressure on the first issue of a comic series, be it mini-, maxi- or regular. It has to set up the pieces for the reader, introduce the main characters and hook readers so they come back for more. Not an easy task, I’d imagine, but the creative team here accomplishes those goals for sure. It’s strange to say (they do fight a giant monster after all) but #1 feels like it’s just scratching the surface of magic here. I’m eager to see the series go deeper into Bridgette’s strange, twisted world.

We also have no idea if/how the McGuires will manage to pull out a victory here. The group looking to resurrect King Arthur appears to be well-organized and is presumably well-connected. On the other hand, Bridgette is past her prime and Duncan’s way out of his depth. Not exactly the dream team but it makes for a more intriguing story. I also think that the darker take on the prophecy is intriguing. As Bridgette points out at the end, King Arthur return during Britain’s darkest hour could be good or bad. Maybe he’s here to save Britain or maybe he’s the cause of the darkest hour himself.

Dan Mora’s artwork throughout this issue is definitely noteworthy. I’ve liked his work on other titles such as “Klaus” and even before that, I had visited his deviantart page once or twice. I especially enjoyed the title page, a skeleton adorned with a crown, staring straight ahead and surrounded by inky darkness. It’s a very haunting image and effectively sets the tone for the series. The questing beast is just as horrifying. This monster has the head and neck of a serpent on top of the body of a leopard. On top of that, it’s stomach is full of dogs. I mean alive, barking hounds, all clearly struggling to get the heck out of there. It’s pure nightmare fuel.

Mora’s artwork also helps endear readers to Duncan. After a bad date, Bridgette’s grandson is plunged into all of the insanity and reacts how a normal person would under the circumstances. The expressions Dan Mora draws for Duncan are just priceless. I don’t know if they’re meant to be so hilarious but man, they crack me up. Duncan’s feelings are painted all over his face. He’s absolutely shocked seeing his grandma’s monster-hunting weapons stash and scared for his life running from the questing beast. Someone give Duncan a hug. The guy’s having one heck of a night, let me tell you.

Bridgette McGuire is already the breakout character of the series. She’s scary in the sense that you have absolutely no idea what her next move will be. One second she’s rolling a joint and threatening to break fingers, the next she’s playing up the innocent old lady act. She’s such a grandma…much like some of my actual relatives, she has no idea how Uber works. She dotes on Duncan and pinches his cheeks. At the same time though, she holds him up at gunpoint to get her way. She threatens to shoot him and much to Duncan’s surprise (and mine) she actually does. Bridgette’s as eerily calm as she is unpredictable too. She thinks nothing of using her grandchild as bait for the questing beast or breaking out of her nursing home. Her world is so darn weird but you can tell that it’s just another day for her. The resurrection of a long-dead King is business as usual. I can’t wait to see what the McGuires get up to next in the issues to come.

Final Verdict: 7.5 – This grandma and grandson could bond over knitting, but that’d be boring.