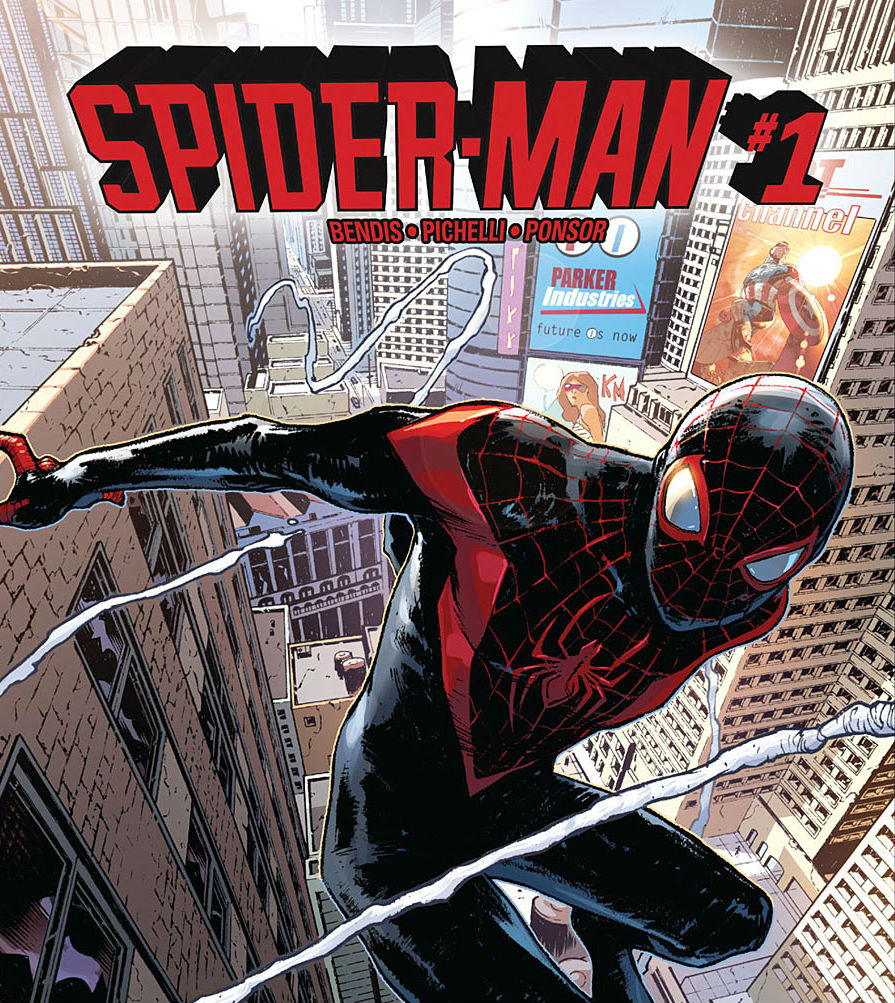 With the conclusion of “Secret Wars”, Miles Morales is now part of the main Marvel Universe. How does his reintroduction go? Well, let’s find out! 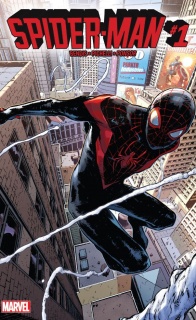 Miles Morales has been doing the super hero thing for a while, now, but after Secret Wars, he’ll be a full-fledged member of the Marvel Universe. Swinging next to The Invincible Iron Man, The Mighty Thor and the All-New Captain America as a card-carrying member of the Avengers is an adventure, but it’s not all fun and games for New York City’s main Spider-Man! What happened in the eight month gap? It all starts in SPIDER-MAN #1!

When this book was announced, there was something about it. A cold feeling at the back of my neck. Illusive and oppressive at the same time. It was always there whenever I thought of the book, which was strange because I love Miles Morales. He’s one of the best things to come out of Marvel in the last decade and the only thing worth salvaging from the Ultimate Universe aside from Ultimate Nick Fury (as opposed to the convoluted mess that is Nick Fury Jr.). So what was this feeling of doubt? Well, after reading “Spider-Man #1”, I have finally come to realize what it was:

For the sake of Miles Morales, Brian Michael Bendis needs to leave this character.

That may sound harsh, but it doesn’t make it any less valid. Let me take you through my experiences with Miles and Bendis’ writing of the character. This issue #1 marks the third ongoing that Miles has had. The first, “Ultimate Comics: Ultimate Spider-Man” was really good! It was fresh! I was great watching Bendis build this new world for Miles and is cast. It was good… for most of it. Then we had “Miles Morales: Ultimate Spider-Man”… which was kind of terrible, started by Bendis sorta bringing back Ultimate Peter Parker (which really just feeds into the fact that Marvel really has no faith in these legacy characters because they need to have the original dudes running around. See Also: Their inability to let Sam Wilson have a year or uninterrupted Captain America stories w/o having to share spotlight with Steve). “Ultimate End” I couldn’t even finish because of how abysmal I found it and based on everything my colleagues said in the MC3 Column, I wasn’t missing much.

Now we come to this.

You are probably wondering why I haven’t talked much about the issue. Well, to be honest, not much happens. Or at least not a lot of interesting things happen. Basic Rundown: This is Miles. He goes to school. He has to balance it with superhero work and it’s causing his grades to slip. Miles blows off school to stop crime because action is his reward e.t.c e.t.c. Demon Monster thing attacks. Miles beats it. Then Spider-Man (the original one) shows up to demand “what has he [Miles] done?” And all of it is the textbook definition of “run-of-the-mill”. It is some of the most stock work that has been done. Hell, it’s work that has been done with Miles before, but that was fine then when the character was still being established. This feels so lifeless. Anyone could have produced this script. I want to compare this with the book’s Avenger Sister Book, Ms. Marvel, which just got done doing an arc about Gentrification, which is an important topic!

And this dull script does artist Sara Pichelli, ink assist Gaetano Carlucci and colorist Justin Ponsor no favors. Now look, I am so happy to see Pichelli doing interiors after feeling like so long. She reminds me a great deal of Olivier Coipel (my number one choice of artist I’d love to write for if I was ever given Avengers and free reign to do what I wanted), although I believe her line work is a bit firmer than Coipel’s more wispy pencils, but it’s still really great. I also do enjoy how the art team took into account that time difference between when Miles first was introduced and current day. He doesn’t look thirteen anymore, he looks sixteen. And yes, that’s a major difference and I’m glad it’s shown. Granted, now that he’s in the main Marvel U, don’t expect him to age that much more, but still.

There were some flubs on the artwork though, really towards then end. I believe the inkwork towards the end wasn’t as strong as it could have been. Especially that last page where a load of the background seems to meld together. Even the coloring (and Ponsor had very strong and vibrant coloring in the first half) feels slightly off. But even with some of the artistic weaknesses, this was better artwork than this script deserved.

Am I being harsh on this book? Perhaps, but apart from the story just being so unambitious, there is another reason. “Secret Wars” would have been the perfect moment for Brian Michael Bendis to leave the Ultimate Universe for good. He could have passed the torch on to a younger writer that is more… well… hungry and ambitious (and yeah, won’t lie, would be interested to see what a black writer’s experience would bring to Miles) and Bendis could have looked on with pride at the incredibly influential universe he helped build over the last decade and a half. But he did not. He kept going past, in my opinion, the point where he should have stopped and moved on. This book, while pretty looking, needs to be more than it is and this first issue did so little to convince me that it will.

Miles Morales is a great character. I love him, I love his world. But it is at this point where I feel like the character is being held hostage. “Hey,” it seems to say, “You want to support this great and important character? Well you got to pay $4-8 dollars a month to support some really boring stories!” And I can’t do it until something changes.

Final Verdict: 5.3- While having some great art, the story is unambitious and nothing one hasn’t seen before from this character in the last few years.