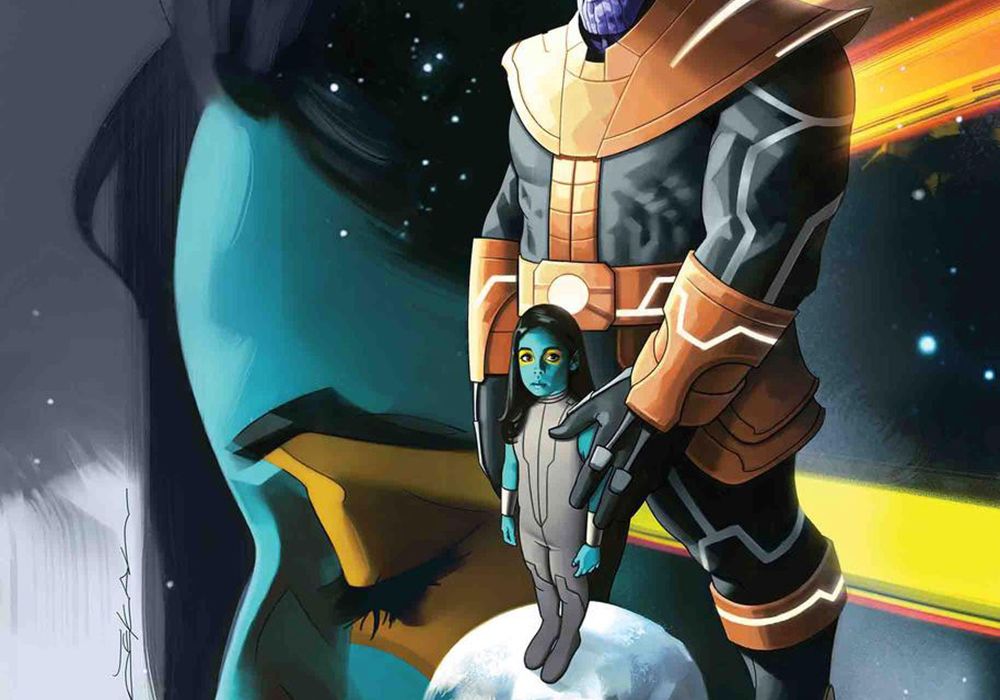 In the first part of ‘Zero Sanctuary,’ Tini Howard shows that sometimes, the most terrifying person you know is your boss. 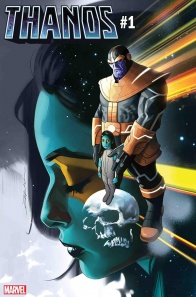 Executed by the deadliest assassin in the galaxy…his daughter, Gamora. But before their relationship came to a bloody end, how did it begin? Find out in this all new miniseries by Tini Howard (MARVEL KNIGHTS 20TH and AGE OF CONAN: BELIT) and Ariel Olivetti (DEATH OF THE INHUMANS)!

Tini Howard has been on a roll lately, with concurrently published titles such as “The Forgotten Queen,” “GLOW,” and “Age of Conan: Bêlit.” It can be difficult for some to see how one person could balance all of those disparate franchises, from villains to heroes and more, especially over such a short time frame. Does she succeed with the story of the Mad Titan and Gamora? Yes, and with great aplomb.

Despite being the eponymous character of this story, Thanos does not have the majority of the focus. Instead, attention is paid to the Butcher Squadron, including the likes of the Ebony Maw and Proxima Midnight from the yet unformed Black Order. Using the perspective of the Squadron as bored comrades who relax by playing cards in between missions to massacre planets, Howard manages to lay in a “human” touch, for lack of a better term, to make them relatable as they joke with one another. The way that individual members get lost on the ship and go missing is played not unlike a horror movie in which the lone lookout goes to check on a situation only to be killed by a monster. Unfortunately, they happen to work for said monster, so the threat is both implicitly known by all and completely inescapable. Not unlike Mads Mikkelson’s Doctor Hannibal Lecter from NBC’s Hannibal, the threat posed by Thanos is one that is only truly known to the readers as they dread what level the Deviant Eternal will stoop toward next.

However, the aforementioned “humanity” does not work just to make them relatable, but rather to make his subordinates all the more horrible. The script has them treat massacres as basic jobs, expressing boredom over easy ones, et cetera. As such, while the Butcher Squadron is given a focus and a means to be somewhat relatable for readers, that is not the same thing as a sympathetic point of view.

As shown in her work on “Euthanauts,” Howard is very good at utilizing death within a story, let alone capital D “Death” herself. Having a story fundamentally work itself around Thanos’s earlier attempts to woo Lady Death therefore is a pretty natural conclusion, even if the story had not been set at this earlier point in the Mad Titan’s crusade. His continued attempts to find her, to chase her down despite his aggravation, are a means of showing not only his obsession, but also his apparent madness in that he seems to be the only person capable of actually visualizing the not-so-Grim Reaper. The obsession is still in play even when she is not the key focus of a scene, such as her presence behind Thanos in various scenes of murder just out of his sight, evidently watching him even when he himself is not overtly aware of her presence. Thanos’s fixation is such that when a revelation comes up about Death, it comes as a shock not only to the warlord, but also to the reader.

Gamora’s presentation is double-sided. You have the terrified young child in the story itself, and the traumatized narrator of the framing story, showcasing how far the assassin has developed with time. In the narration, all of the action is stated in a businesslike matter-of-fact nature that belies her own horror at her past, with the choices of words making clear that she would rather be doing anything but telling the story of how she grew up, even without her outright statement that she would rather never speak of this tale ever again afterwards.

Ariel Olivetti’s artwork is highly detailed, but also heavily shaded at the same time. The effect is one of overall dread in heavily varied locations ranging from the ship Zero Sanctuary itself to even brightly lit planets. Thanos casts a deep shadow not only in the script, but also in the art, with heavier shading on him than most others to the point of him seeming extra monstrous regardless of the situation. On the other hand, there is more detail to the face of the more human-looking individuals, adding sympathy even to those who lack such qualities in the story itself. Gamora is especially prone to this kind of sympathetic light in both her adult and child forms.

Meanwhile, Antonio Fabela’s colors add another dimension to the entire enterprise. In the scene on a video screen, the colors are more muted, even a bit grainy, giving the impression of it being a projection of an event rather than the event itself. The colors on a planet’s surface are bright, acting in deliberate contrast to the horrific action around. Fabela takes note of changes in light sources, with a darker palette in areas of lower light despite being the same entities as outside. The darker palettes also act in another contrast, with splashes of red against black splotches make for a kind of “negative” image of a bloody murder.

Final Verdict: 8.5– By looking backward, “Thanos” #1 manages a disturbing new look at the eponymous Mad Titan through script and images both.