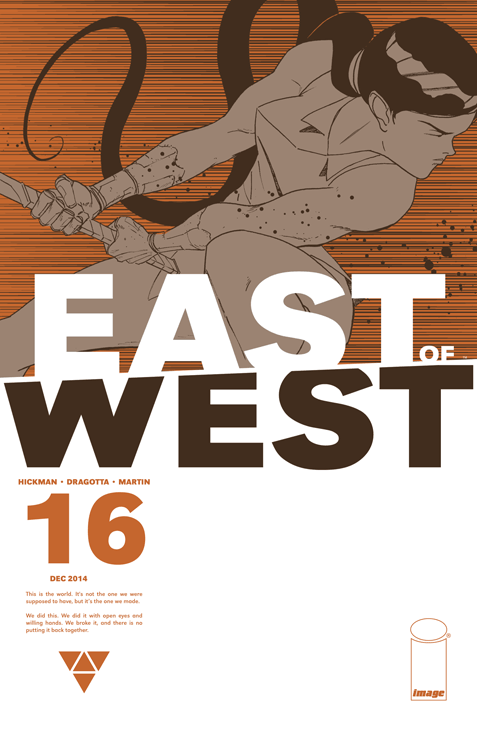 One of Multiversity’s favorite ongoings of both 2013 and 2014 continues its journey towards the apocalypse, with Hickman and Dragotta kicking off the official second year of the storyline in an over-sized, variant heavy release this week. Does it start with a bang? A whimper? Is this a portend that there is no tomorrow and that tonight is Y2K for real? Find out below, at least in relation to the first two questions. 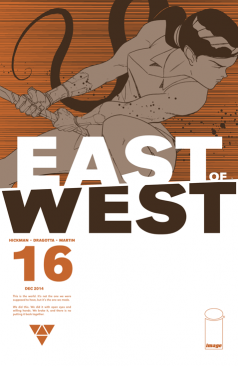 “THE APOCALYPSE: YEAR TWO” begins in the over-sized EAST OF WEST #16! Following the dramatic conclusion of YEAR ONE, the Great Beast now roams the fractured United States of America. Deep into an all-consuming war between the splintered nations, the Four Horsemen move to further their individual agendas while resisting the inevitability of The Message.

In 15 issues (plus a one-shot) – or approximately the span of time it takes to tell a year’s worth of stories in this world – Hickman and Dragotta have covered a lot of ground in building the world of “East of West”. Not only have they mapped out the whole of the United States, they’ve done a hell of a job in developing the denizens that make this future such a fascinating one. As the year turns and the apocalypse’s version of Ryan Seacrest (presumably also Ryan Seacrest) watches the ball drop in some Gestapo fueled version of New York City, we get in a check in with many of the main players, and as with everything in this book, its wonderfully, brutally effective.

From the intro with the Horsemen all the way to the close of the issue with three fugitives in hiding, this issue finds Jonathan Hickman at his absolute best, as the issue ably blends the more mythic in nature and scope elements he loves to bring to the table (like the way the war between the Republic and the Endless Nation was depicted) with the moments of a more narrow focus oriented on character, like the rescue of Bel Solomon or Doma’s reveal of the Endless Nation’s response to their diplomatic efforts. In any Hickman work, you’re going to get the grandiose parts that show off the big ideas he brings to the table, but what makes his work truly special – and what your mileage will occasionally vary on – is those moments where he uses his writing to cut like a knife. The siege on Solomon’s execution was handled with every bit of the precision Thomas’s miraculous shot took, and Hickman makes it the heart stopping moment it needed to be to give it the weight it deserved.

Of course, having Nick Dragotta as the visual storyteller in the book helps immensely, as he makes a moment like that soar. Just check out the layouts on page 16 as he uses panels to depict both space and time shifts in a highly impactful and constantly engaging way, fitting everything together in a way few other artists could visualize. There are tons of showy moments in this issue – the full page of War before the title page is an A++++ moment, for one – but so much of the book’s power comes from subtle things like the way he lays out story beats or the raw energy he can bring to an action sequence. Dragotta is, in my opinion, one of the most underrated artists in comics, and this issue is a great example as to why he should be held in such a high regard.

This is an immensely impactful issue, as it sets up a lot of key pieces as we move into the next year of the apocalypse, but thankfully, Hickman and Dragotta don’t just look at it as an issue of moving pieces around the board. Sure, there are an array of scenes in here that are epic in nature, but they’re all built around the political intrigue of the broken alliances that once tenuously held, and the players who have done their part to fray those bonds. It invests us as readers, and it makes the stakes all the higher.

The apocalypse rolls on, though, and I for one am as interested as ever in the Message and everything in this world it has tainted or emboldened. “East of West” is back, and things are looking better than ever, at least for us. I’d tell you to pray for the characters in the story, but something tells me it wouldn’t do any good.

Final Verdict: 8.0 – another stellar entry in one of the finest comics on the market