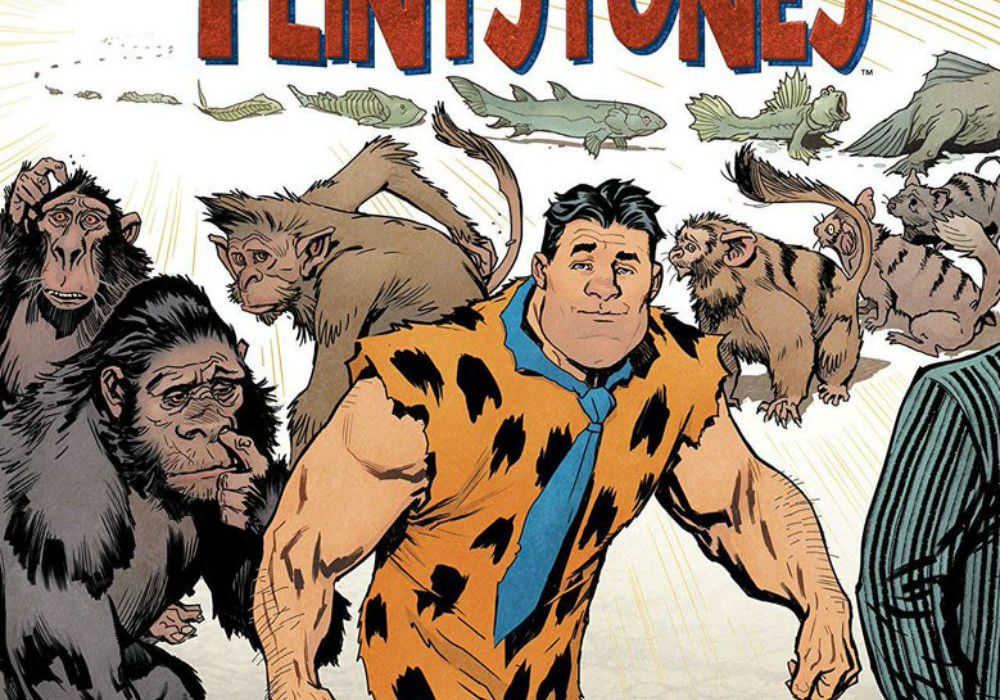 In a different year, “The Flintstones” running a full twelve months as DC’s – or, for that matter, most any other publishers’s – sharpest satire might stand to give you pause. But the fact is, this hasn’t been any other year. And that’s just made Mark Russell and Steve Pugh’s work all the more prescient. 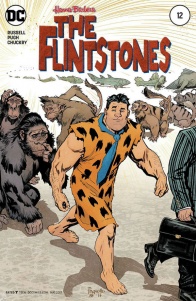 You are now leaving Bedrock! The Great Gazoo is on his way home to the stars, while Fred and company leave the Church of Gerald, and Mr. Slate leaves behind being a jerk— at least for a little while. Say good-bye to Pebbles, Bowling Ball, Philip the turtle, Fred and Barney, and the whole cast in this final issue of what critics are calling the best comic of 2016!

“My theory is that the human race has entered its terrible twos,” Gazoo reports in the first half of his findings back to Las Vega that bookend “The Flintstones” #12. “They still act like babies. And babies are basically sociopaths. Which is okay because babies need to be greedy and self absorbed to survive.” Mark Russell’s words cut deep and surgically precise. And based on his and Steve Pugh’s thorough carving of prehistory, it’s quite possible they believe own modern age hasn’t matured any further past the point of being surly, emotional three-nagers.

Typically, Pugh and Russell have taken the edge off their take by doling out the funny like they were stuck in a game show lightning round. Past issues had them throwing out sight gags, wordplay, high-brow derision and no-brow shenanigans like they were trying to use up all the jokes before the ice age hit. In that regard, this final entry feels a bit more restrained. Where previously it felt like they were doing anything and everything that could conceivably incite a laugh, here there’s a measured approach. For their final lap, they’re bringing all the various threads to their naturally selected ends with laughs and insight.

There’s a news report in “The Flintstones” #12 covering Mr. Slate’s recent foray into philanthropy. By tying this act to the re-opening of the Bedrock Children’s Hospital, it also put a capstone on a vent left open from the Clod storyline. But most of all, it’s a moment where Russell brings a character arc to a conclusion that feels logical and earned. And hilarious, too. The annex he donates money for is compassionately named Slate’s Home for Sub-Par Children. Ever the master of facial expression and acting, Pugh punctuates this reveal through Slate’s body language, as he reacts to a bystander’s arms-crossed disapproval. Pugh captures the “What? I’m new to this,” demeanor without Russell really having to add the dialog explicitly. Although, it being there does help the joke’s overall delivery.

Pugh’s art throughout the series has been a perfect match for its sensibility. There’s enough crag in his characters that the whole endeavor feels suitably stone-aged. But anything too jagged, too cutting has been softened just enough – like rock faces on a riverbank worn smooth by coursing water. There’s an undercurrent to this stylistic choice that implies that for as biting as the satire is, the book’s intent is still humor first. For all the social commentary, neither creator is above an armadillo bowling ball exacting his ultimate revenge by leaping from the lane during the final frame of the championship match to attack an innocent commentator.

And while Pug’s art has always been consistent, he’s never really gotten flashy with his paneling or layouts. “The Flintstones” #12 is still ages away from the J. H. Williams era, but there’s a flourish to the bowling scene that hasn’t really been present before. The odd bit of framing is centered off angle, some panels even cut into the page off-plane. The effect brings some pull and sway to the artwork, and thereby some real tension to the finals. So when Pugh gets to draw a reaction shot of Cathy’s Spare Ribs taking the lead over Fred’s Quarrymen, it feels like the most animated bowling celebration since Pete Weber went all who-do-you-think-you-are-I-am in 2012.

Whether the stories finish outright or are given new beginnings that we’re never meant to see the end of, there’s a sense of finality to all the threads coming together. Child hospitals re-open, Fred’s chance at ten-pin glory is dashed, and even Bowling Ball finds a new spark of friendship. But what really gives this issue it’s thematic weight is Pebbles’ thoughtful weighing of the Church of Gerald’s tenets against those of the Young Scientists. Finality and mortality go so often hand in hand that it just feels right that things close with the most impressionable Flintstone caught between the push and pull of science and religion. “Science is probably better at telling you what to believe, religion is more about telling you what you need to believe,” Reverend Tom tells her. And while the two might reside on opposite sides of the coin we use to make sense of our place in the grand scheme, it’s not as important which side we’re looking at, as long as we’ve got the coin in our pockets.

Overall, “The Flintstones” #12 isn’t the best of the series – endings seldom are. But that’s okay. If it were any better, we’d probably be reaching up to Russell and Pugh – or Gerald – and pleading for more. Instead, what we get is a heartfelt summation of the run. One to which we can all nod in appreciation and say, “Just enough.”