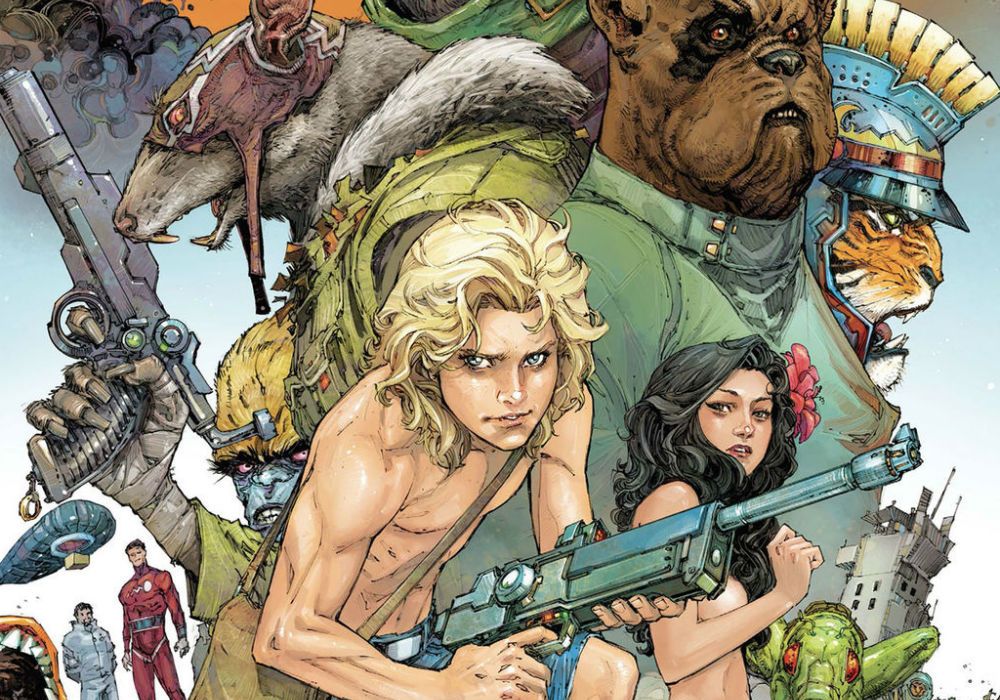 Every once in awhile DC will publish something innovative sometimes functioning as a pastiche of old ideas or concepts, sometimes the new take can be a brand new spin on a property entirely. “The Kamandi Challenge” #2 tows the line, offering up a familiar concept with an invigorating spin on a serialized comic. In every issue one or two sets of creative teams have to solve the cliffhanger from the last issue, battling to keep the story going until the end. While the first issue of the book ran with the idea and had fun with the concept, I felt the pacing rev up at the speed of light, not giving Kamandi as a character enough time to breathe or develop in any meaningful way. While the idea of the title is so novel it will be remembered fondly, will this next creative team be able to solidify the stakes and character development that the story needs to win over a skeptical reader? 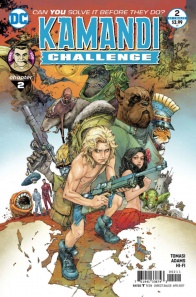 After the thrilling events of issue #1, writer Peter J. Tomasi and artist Neal Adams rescue the Last Boy on Earth and send him on his next adventure. Now, Kamandi must save Tiger King Caesar and his people from impending doom. Will he be the hero they need? Or will he use the chaos of the situation to escape for good?

When a comic book writer and artist are perfectly in sync, readers get the benefits with serene moments of shock and awe. That’s exactly the note “Kamandi Challenge #2” starts with in an incredibly detailed first page from artist Neal Adams that immerses readers directly into the next issue. The beginning of this issue is laced with a tangible urgency, and Adams pencils add just the right context to make this comic seem just as urgent as Tomasi’s script.

For better or worse, Tomasi’s script continues the trend of pushing this series’ plot at a breakneck speed. There are only a few moments to catch a breather before Kamandi is placed in an even worse situation than he was in before the issue started. The script also takes some liberties that are just a touch too convenient. There’s a large plot thread that was resolved in a bizarre manner that was almost too easy for a writer like Tomasi. Some of the issue’s scene transitions are so surreal it can derail the pacing of the actual story.

The breakneck pacing of the issue accelerates in the mid-section where “The Kamandi Challenge” tries just for a second to take an actual place in continuity in the DC Universe. The series still quite doesn’t seem tied to one part of DC history, but establishes that the series still honors at least some of what came before in the more broad DC world. The idea that the “The Kamandi Challenge” is just outside of the DC Universe continuity is an interesting way for the series to progress. The scene with the further ties to the DCU also implements some of the best visual trickery into the issue. Adams seems to have a lot of fun in this issue, but one particular splash page introduces so many elements of the issue inside of a collage that sums up everything that this issue has to offer in such a profound way.

The readers of Kamandi Challenge will likely be people that have some interest in the DCU, thankfully, this issue is jammed with teasers and cliffhangers for longtime comics fans that will have the right reader squealing with delight. However, lots of fan service doesn’t always equate to a good story. In the middle of moment-to-moment pacing and pulling together delightfully weird DC characters, a bit of the coherence is lost. One scene brings Kamandi to a beach with little explanation of how or why he got there.

With so many creators telling the story, it can be a little hard to invest in the character of Kamandi who has few defining characteristics other than being an action hero. Kamandi finds himself in the middle of lots of challenging scenarios and faces them bravely, but readers never get a sense of who he is as a character.

This comic is operating at an absurd pace in only 25-pages of story content with tons of scenarios Kamandi has to face. With so much happening in such a short amount of time, I’m unclear of what exactly Kamandi himself is trying to accomplish other than surviving death. Tomasi smartly steps out of the way and lets Adams go wild in this story, loading the issue with tons of DC relics that Adams seems to have a fondness for. Had this issue been a little more restrained plot-wise and Kamandi and his supporting cast better characterized, this issue might have been remarkable.

Final Verdict:7.0: “The Kamandi Challenge” #2 is a surreal visual feast where Adams and Tomasi seem to find delight in chaos!