Ah yes, New York. Times Square. Jay-Z. The Yankees…and if you live in the Marvel universe, about a bajillion superheroes. I mean, why do the villains even stay in New York? I can buy that Namor achieves flight with those dinky ankle wings but the villains not fleeing to the Midwest en masse is beyond me. Now over at DC Comics, their characters are more spread out. Batman has Gotham, Superman has Metropolis, etc. That’s the way to do it, don’t pack all the characters in the Empire State like sardines. There are problems and super-threats around the globe after all. We see that in Marvel’s big ‘War of the Realms’ crossover, where the fire demons of Muspelheim have touched down in Asia. Fortunately, the New Agents of Atlas are on top of it!Pick of the Week: “War Of The Realms: New Agents of Atlas” #1 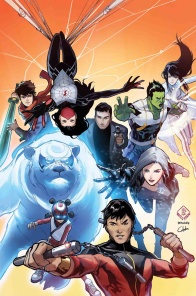 Written by Grek Pak
Illustrated by Gang Hyuk Lim
Lettered by VC’s Clayton Cowles
Colored by Federico Blee
A WAR OF THE REALMS TIE-IN! As Sindr, Immortal Queen of Muspelheim, and her legions of Fire Demons march on Asia, it’s time for a new band of heroes to unite to protect the Pacific Rim. Having brought together a ragtag team of heroes to defend the Earth from an alien invasion in the past, can Amadeus Cho reassemble his “protectors” — Shang-Chi, Silk and Jimmy Woo to save the world from incineration? And where is Kamala Khan? And just who are Crescent, Io and Luna Snow??? Featuring Marvel’s newest heroes from China, AERO and SWORD MASTER, and a mysterious new Filipino heroine named WAVE!

New readers may wonder if they need to bone up on the old Agents of Atlas to enjoy “New Agents of Atlas” #1. Not really. The only common thread between the two teams is leader Jimmy Woo. If you ever have the time, you totally should read about the other team though. There’s a guy trapped in the body of a gorilla and Namora, Namor’s cousin, also rocking the dinky ankle wings. Good times. Now while not exactly prerequisite reading, it probably couldn’t hurt to skim over some of Greg Pak’s Marvel stuff, especially “Totally Awesome Hulk”. That series centered around Amadeus Cho (the character was actually created by Pak) or Brawn, as he goes by now. “Totally Awesome Hulk” also featured the first team-up of the ‘Protectors’ which included S.H.I.E.L.D. Agent Jake Oh, Ms. Marvel and ‘New Agents of Atlas’ Woo, Shang-Chi, Silk and Cho.

This issue opens over the North Pacific, where Filipino superhero Wave and Chinese superhero Aero are responding to a disturbance. The two are quickly taken out by Fire Demons. In Mumbai, Jimmy Woo has arranged for the ‘Protectors’ to put on a demonstration for the Pan-Asian School for the Unusually Gifted. At dinner, the others can’t help but notice tension between Amadeus and Ms. Marvel (You can read more about that over at “Champions”, it’s one of my favorite titles from Marvel right now). Jimmy takes the opportunity to stress the importance of team work when their lunch is interrupted by a transmission from Jake Oh.

Oh informs his fellow ‘Protectors’ of Malekith’s invasion of New York. While Ms. Marvel heads for New York to rendezvous with the Champions, the rest set out to respond to another invasion in Seoul. Korean heroes White Fox, Luna Snow, Io and Crescent have intervened to fight back the Fire Demons. When the ‘Protectors’ arrive on the scene, Amadeus wants to instantly jump into the fray though Jimmy warns against interfering.

Getting in too close, their aircraft is hit and Jimmy Woo is down for the count. An initial understanding has these ‘New Agents of Atlas’ fighting instead of working together as Woo had instructed and Luna Snow ends up frozen. Queen Sindr arrives with her full army and thanks the team for fighting each other, making it easier for her to conquer Asia and claim it as New Muspelheim. Meanwhile, in the North Pacific, Wave and Aero are rescued from Fire Demons by none other than Tūtū Pele, the Hawaiian goddess of volcanoes herself.

This is a fun issue and marks another strong tie-in for the ‘War of the Realms’ event. The story is engaging and again, it’s an welcome change of pace to put the focus on some non-New York, non-American characters. Marvel has a lot of interesting international characters but they typically end up taking a backseat to the A-listers. Maybe it’s just me but it seems like Marvel goes into space a lot more than it goes to, let’s say, Japan. I mean, did you know there was a Pan-Asian School For the Unusually Gifted? That was news to me.

I really appreciate seeing the ‘Protectors’ educate and interact with those Unusually Gifted students too. It was a small moment in the comic but it really struck a chord with me. It really shows how important representation is. In my personal experience as an African-American, black characters have always been special to me. I wanted to buy my first comic when I saw “New X-Men” #10, the cover prominently showing the Gifted Youngster ‘Prodigy’. It’s great that Greg Pak makes sure there’s strong Asian representation in this issue and it’s a breath of fresh air to see such a diverse mix of unique Asian characters.

All of the characters really seem like fun. White Fox, the Korean super-agent, Luna Snow, the K-Pop star/superhero and Crescent and Io have all been featured in Marvel Future Fight and should appear in the comics more often. The ‘Protectors’ already have a warm, even familial, bond with each other and their community. It’s great to see more of this dynamic. Cho is our lead character and Pak, his creator, does an excellent job of exploring the character’s flaws and fears in “New Agents of Atlas”. Pele, Aero and Wave don’t get as much ‘screen time’ but that makes me all the more anxious to learn more about their characters, especially Wave, Marvel’s latest Filipino superhero. Do you see that costume? Take a good look. Ooh, that design is just too clean.

The artwork is solid throughout this comic as well. Gang Hyuk Lim draws some appropriately terrifying Fire Demons. The hellish army looks very imposing on the spread pages with Queen Sindr. That’s not the only panel to appreciate here, there are plenty more. Take for example, Cho charging straight through a killer robot with a cocky grin. The determination on the face of the little girl White Fox saved, the child ready to face down the forces of Muspelheim. Luna Snow strikes a cool hero pose when she leaps into action and there’s a quietly hilarious panel when Cho gets socked in the face by Io.

Now as the first issue in this mini-series, there is a good deal of exposition, introducing characters and setting up the pieces. Of course, all of this is necessary. We’re quickly working our way towards the main event though and “War of the Realms: New Agents of Atlas” #1 does a great job of hooking readers right out of the gate. I’m definitely excited to see what’s next.