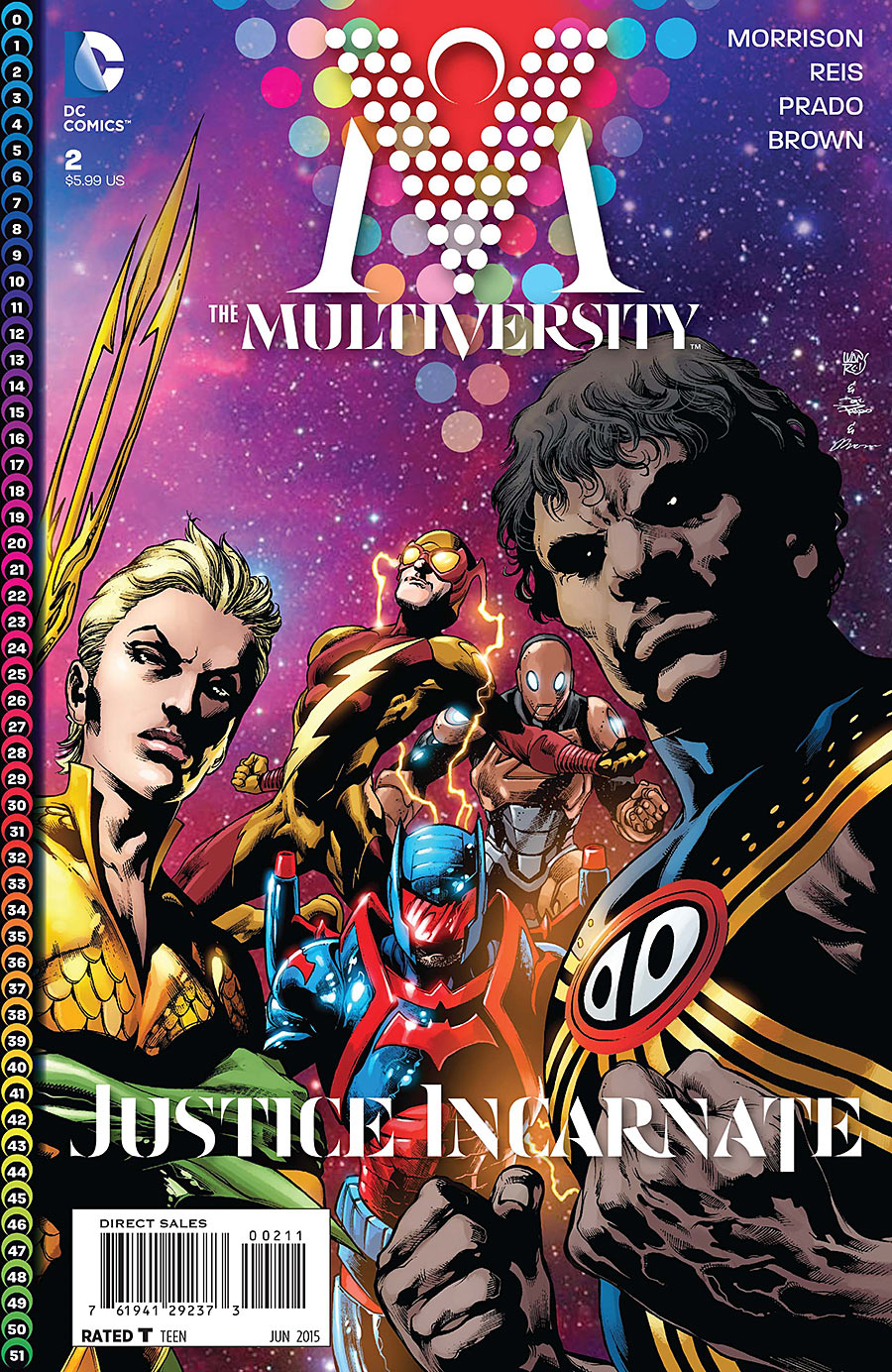 For the last eight or so months, Grant Morrison and a team of amazing artists have been exploring DC’s Multiverse as forces that threaten to attack the very existence of life itself face off against impossible heroes. Here, with “Multiversity” #2 that sort comes to a close.

This review of “Multiversity” #2 will probably contain spoilers for the issue as, honestly, there’s no way I could really talk about the comic while trying to skirt around the details. Read the issue before reading this review any further. 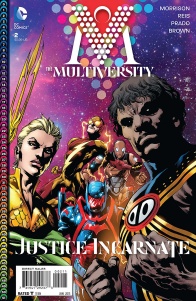 Written by Grant Morrison
Illustrated by Ivan Reis
Every event in the history of the DC Universe has been leading to this! The final chapter of the greatest adventure of all time is here!

Issue #1 artist Ivan Reis reteams with mastermind Grant Morrison to end THE MULTIVERSITY and bring together the greatest and bravest heroes of the DC Multiverse to fight one last battle. But more than just some cabal of super-villains, they face the greatest evil that ever existed. An evil so massive, they actually may not stand a chance!

Who are the mystic Justice League of Earth-13 and what role does their leader Super Demon play in the crisis rising all around them? What shocking secret motivates the dark, nightmare henchmen known as The Gentry? And what is the final fate of Nix Uotan – the Super-God?!

I’m often worried that Grant Morrison’s reputation for outrageous, over-the-top, often incredibly metatextual stories has overshadowed his actual storytelling skills in recent years. I think perhaps the persona of Morrison himself and the reputation of series like “The Invisibles” draws this expectancy for each series to be weirder and more incomprehensible than the last. And yet, I also that, when you break them down, Morrison’s stories aren’t as incomprehensible as people often think they are, they just require a little more work on behalf of the reader to fully grasp the nature of the narrative. With “The Multiversity”, I found myself hoping that the expectation for Morrison to pull another “Final Crisis”, I guess you could say, in terms of an incredible, only-in-comics conclusion wouldn’t overshadow that actual conclusion of the series.

Well, it turns out that worry was for naught, as Morrison and artist Ivan Reis bring “The Multiversity” to a close with the exact kind of universe-spanning and universe-hopping adventure that the series deserved. While the the one-shots that make up the bulk of the series have in their own way built up the story of “The Multiversity” and the threat to the multiverse, this issue is, as the title and numbering would imply, much more of a direct continuation of what we saw happen in “The Multiversity” #1.

While I don’t want to get into the actual events of what happens in this issue, I think one of the major problems it has is due to it bearing the brunt of the rather unconventional structure of this series. With so many different elements introduced in each issue of this series and so many loose ends to tie up, even this extra sized can’t handle them all and there are elements that definitely feel like they slip through the cracks as the scale escalates throughout the issue.

As soon as Morrison and Reis bring back the Gentry and start to explore them and the Bigger Bad behind them, stuff like the League Of Silvanas seem almost like a non-issue in hindsight. This doesn’t break the issue or make it not fun to read, in fact the escalation of the story throughout this issue is one of the best aspects about it, but there is a lot the issue has to wrap up and some elements feel less important than they were hyped up to be in the end.

Though that is, honestly, the only major stumbling block this issue faces. Morrison is completely on his a-game here as he brings the whole metatextual context surrounding this event to a point with heroes from all over the multiverse facing off against the gentrification of superhero stories with the darkness, grittiness and realism that is so often thrust upon the genre in an effort to legitimise it.

Teaming up with Ivan Reis was a perfect choice as his art brings a scale and, dare I say it after that last sentence, realism to the proceedings without losing any of the magic and optimism from Morrison’s script. This is the best use of Reis’ artistic style I’ve seen at DC as his more realistic art evokes the violence and danger that faces the heroes and gels incredibly with eldritch designs of the Gentry, but then the Marvel Family or Captain Carrot comes crashing through and Reis shows that his art style does not emit fun superhero adventure from a comic.

Not only that, but as this comic deals with the unravelling of space and time and the destruction of universes, Reis employs a lot of experimental layouts that break up sequences into a number of unconventional panels that shows the breakdown of time. This not only gives the comic a feeling of things being off, of the strings of reality fraying, but it also allows Reis to break down these giant, epic moments into smaller, distinct moments and time.

This lets what could otherwise be a very overwhelming issue play out incredibly smoothly as Reis doesn’t let the craziness overwhelm the storytelling. I mean, this is still a comic written by Grant Morrison, so the craziness does overwhelm it somewhat and this issue is definitely going to require a reread or two to fully appreciate all what’s going on, but Reis does a fantastic job of laying it out as cleanly as possible to follow the action.

All in all, there’s a lot more I could talk about with this issue, but that would run the risk of turning this from a review into an annotations column instead. In terms of the quality of the comic, this issue is stellar. Grant Morrison continues to prove that his grand, cosmic view of superhero epics allows for fresh and clean storytelling and his tributes to the Crises of DC Universes Past speaks to the heart of anyone who is a fan of this multiverse and these characters. Bringing Ivan Reis into the mix, though, is something I think is inspired and really shows how underutilised I think he has been in the New 52. He showcases the ability to play the grand, optimistic superhero stuff incredibly straight and does it well. If DC can stop bringing him in just to showcase violence, they’ll be able to really let him stretch his artistic muscles.

“The Multiversity” is a comic in which the optimism and childlike wonder we all felt the first time we read a superhero comic is literally under siege by personifications of the gentrification of superheroes by forces who want to stamp out that optimism in favour of darkness and pessimism. While this series might not be for everyone, and it’s certainly Grant Morrison at his most Grant Morrison-y, it cannot be denied that it’s a series that wholeheartedly loves superheroes and wants to champion their effect on us.

And like all great superheroes stories, it ends with a ‘To Be Continued…’

Final Verdict: 9.8 – DC should be cribbing notes from this series in how to do their characters justice.