KRAKOA. Nearly every mutant on Earth lives there, except for one important kid. But now it’s time for Franklin Richards to come home. It’s the X-MEN vs. the FANTASTIC FOUR and nothing will ever be the same. Mild Spoilers Ahead. 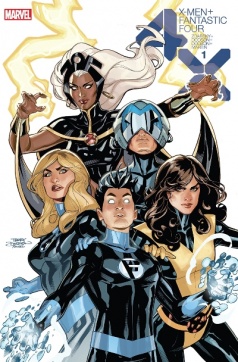 During a mission with the Fantastic Four in an alternate dimension, the different flow of time there caused young Franklin Richards to come home a teenager. Aside from the hormonal changes, Franklin’s mutant gene also activated. He is unsure of how to move forward with his new found powers, and his parents, whose powers were acquired through a scientific accident as opposed to human evolution, don’t know whether to encourage him or cure him.

As the mutants continue to get settled in their new country of Krakoa, Prof. Xavier learns of Franklin’s mutation and wants him to join rest of the mutants. He enlists Kitty Pryde and Storm to head to New York to discuss the matter with Reed and Sue. Unhappy with the lack of concrete answers from his father, Franklin grabs a bite to eat with Ben Grimm to discuss his new powers and for any wisdom he might be able to give.

Emotions are hot from Franklin and Reed’s brief argument when the X-Men arrive to discuss bringing the boy back with them to Krakoa. Because of this, Sue greets the mutant heroes with nothing but contempt. This all of course leads to fights and some regrettable words between the two sets of superheroes. The story isn’t anything new to the world of Marvel Comics, but Chip Zdarsky (“Daredevil,” “Sex Criminals”) writes a refreshingly new take on this type of conflict.

The script is tight and energetic giving the entire issue a perfectly paced premiere to this miniseries. It moves at a speed warranted by the high tension on display throughout, but never blows past any important information or focuses so heavily on action that the plot is secondary. It uses details from previous arcs paired with the new events taking place throughout “X-Men” and “Fantastic Four” giving new and old readers everything they need to enjoy this new story. Even those with the loosest grasp on X-Lore will easily caught up.

Every characters’s motivations and emotions are front and center and because of this Zdarsky gives us some truly great character moments between nearly everyone starring in this issue. Zdarsky’s knowledge of these characters and their histories allows him to give us a story that is all at once crucial to these characters’s futures, an exciting and outstanding new narrative, and is comic book comfort food. It meets and exceeds all expectations. It is rare for a an even series like this to start of so strongly and be worthy of the time of both avid and casual fans. Not only does the entire story feel fresh, even when it is referencing past plots that mirror this one, it feels like coming home. Given the plot at hand that is probably the best sentiment it could gives readers amongst all the turmoil.

The top notch scripting reminds us why we love these characters and superheroes in general and it is presented just as the best comic book movies are, which is why Terry Dodson’s (“Wonder Woman”) artwork and design is a perfect match. His work feels right at home with the majority of Marvel’s titles. However, where as most of that work slips through as being nothing more than cookie cutter set pieces and pretty people who are only distinguishable once they don their hero costumes, Dodson’s work plays it safe enough to be ‘pretty,’ but is truly gorgeous and exciting to over. The X-Men and F4 costumes feel timeless as they borrow from various eras, even their likenesses are amalgamations of many years worth of re-designs.

Laura Martin (“Astonishing X-Men,” “Thor”) brings her beautiful palettes and long standing knowledge of all things Marvel to yet another book. Her work is astounding and gives the entire book the quality it deserves. She uses light both natural and manufactured to give each panel a life of its own. Each and every moments feels lived in and important with her colors in play, whether it is a big fight sequence, or a quiet conversation between family. She leaves nothing untouched, and every bit is a joy to pore over. Typically I can be pretty harsh on illustrations and color work that ‘plays it safe,’ especially from the Big Two, but when it works, it works. And this entire issue is a triumph, both in its writing and artwork. It has been a long time since a title of this type has excited me and reminded me why I fell in love with comics in the first place so I have nothing, but praise for this final product.

This is a superb re-introduction to both the X-Men and Fantastic Four. The entire issue is an incredible character piece that seamlessly integrates major themes familiar to this universe and throws in some kick-ass action scenes to boot. An all around enjoyable read that will please pretty much anyone. Don’t miss out on this new miniseries.

Final Verdict: 9.0, “X-Men/Fantastic Four” #1 is not only an enthralling story of heroes and finding one’s place in the world, it’s an absolute delight to read.