Mild spoilers for “Doctor Tomorrow” #1. Just to be safe

Time travel stories are a lot of fun. Time travel stories are also quite messy. Bad things happen, scientist creates time travel to fix the bad thing, it works, butterflies get stepped on, something worse than the original bad thing that they set off to stop happens, and the whole thing gets resolved when the scientist travels back in time to stop himself from creating time travel, only to discover that they were the root cause of the original bad thing happening in the first place.

Honestly, I’m convinced that the only reason rules like “don’t meet yourself in the past or you’ll destroy the timeline” exist is so that writers can keep the plot of their story simple enough for them to understand and not have to explain all the rules over and over again. 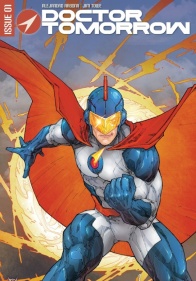 Teen hothead and star athlete, Bart Simms, is about to meet the Valiant Universe’ greatest hero…Himself!
The can’t-miss superhero adventure of 2020 starts here!

“Doctor Tomorrow” #1 opens with the entire Valiant super hero universe together in one place to combat one absurdly powerful super villain named Hadrian. On top of the big crowd shot, the reader is introduced to one of Valiant’s newest heroes: Doctor Tomorrow, a hero that we know next to nothing about with barely explained powers, but appears to command everyone’s respect and attention. It’s a genuinely great way to start off a book and it’s even better to see all of Valiant’s heroes in one place, especially if you’ve been following them since they relaunched in 2012.

And then Hadrian wipes the floor with everyone and appears to destroy the world. But it’s okay, because time travel.

While the comic starts off with a literal bang, writer Alejandro Arbona proceeds to immediately calm things down by giving us a portion of the eponymous hero’s origin story and injecting a great bit of very human and relatable drama into the comic. The reader gets to meet Doctor Tomorrow as a child, a fairly average high school kid who is good at baseball named Bart Simms. Arbona does a very good job avoiding quite a few of the clichés that surround teenage boys. Simms may be good at sports, but he gets half way decent grades, he’s eager to learn, and has a wonderful relationship with a nerdy girl named Gretchin who helps him study. Also, Simms does have family problems and issues with bullies, but instead of lashing out in anger he is willing to take a deep breath and talk about his problems in a healthy and constructive way.

It’s solid character development and some nice quiet moments before everything goes crazy when an older version of himself shows up, tells him his destiny, and gives him a super suit that will probably set him down the hero’s path. It’s the kind of short, violent, and incredibly quick call to adventure that only time travel stories can get away with.

If “Doctor Tomorrow” #1 has a problem, it’s that you kind of have to know a bit about the Valiant stable of characters to get the most out of the comic. Mild spoiler ahead (but not that big of a deal because it’s not that big of a deal to the plot of the issue), but the end of the comic re introduces a character named Neela Sethi. Long story short; Neela is Valiant’s resident time travel scientist and genius extraordinaire who got her powers from a character named Ivar Anni-Padda, but if you want to learn about that story you should go read Ivar Timewalker. While it is great to see her again, her appearance doesn’t really make that much sense unless you know who she is and why she’s important. It’s a great little bit of universe continuity, but it does require some homework to make sense.

The artwork is good and goes a long way towards making “Doctor Tomorrow” #1 enjoyable to read and accessible to a wide age range of readers. Artist Jim Towe teams up with colorist Diego Rodriguez to draw the book in a way that could be described as a sort of Valiant house style if something like that existed. Towe has very little interest in the background or setting of the comic, instead choosing to load each page with a large number of tiny panels that focus on the characters and their emotional journey. While some of the characters can look a little odd at times, their faces are expressive and allow the comic to say a lot without having to use actual words and when it comes time for the action scenes Towe makes fantastic use of motion blur and speed lines to make it all look very dynamic and fast paced. It’s a style and color scheme that feels like it would be great for all types of comic book readers, especially younger ones, and it is a very effective art style for superhero stories.

“Doctor Tomorrow” #1 is a wonderful all ages comic and a great introduction to a new hero that will hopefully play a bigger part in the wider Valiant Universe. While we don’t know much about the actual hero or how his powers work, we do know that he is a good person and that the villain he is up against is incredibly deadly and a major threat to heroes everywhere.
Let’s just hope the time stream can handle it.

Final Verdict: 9.3- A fun, accessible, and relatable hero story that promises to do time travel right and looks to be a great new addition to the Valiant Universe.