Take your seats, hoist your signs and begin your chants as we take a spoiler free look at “Ringside” #1! 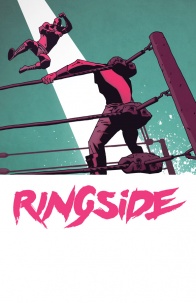 Written by Joe Keatinge
Illustrated by Nick Barber
THE PROFESSIONAL WRESTLING EPIC BEGINS IN AN OVER-SIZED FIRST ISSUE! RINGSIDE is an ongoing series set within the world of professional wrestling, written by JOE KEATINGE (SHUTTER, GLORY, TECH JACKET) and drawn by acclaimed illustrator NICK BARBER, combining the ensemble drama of THE WALKING DEAD with interconnected rotating perspectives akin to The Wire. Each issue will explore the relationship between art and industry from the view of the wrestlers themselves, the creatives they work with, the suits in charge and the fans cheering them all on. But that’s just the beginning. The real violence is outside the ring.

Forget what you just read, “Ringside” isn’t a story about wrestling. Well, okay, not quite. This isn’t exactly The Wrestler where the actual act of wrestling itself was central to the story. This is, if anything, a very stark, character-focused drama where the characters have a connection to wrestling. This is about wrestling in the same way Mad Men was about marketing. Sure, the marketing was a backdrop for the characters’ lives, but the reason you watched Mad Men was because of the rich characters and, surprisingly, the reason to read “Ringside” #1 isn’t necessarily because of the wrestling aspect, but because Joe Keatinge and Nick Barber have created a pretty dark, almost Coen Brothers-esque character drama that takes a look at the nature of violence in wrestler’s lives.

“Ringside” #1 is a comic book steeped in noir. As mentioned, it’s a comic where wrestling is a backdrop, but the reason you should be reading this book isn’t to see some wrestling reality TV show transmogrified into a comic book. After all, you don’t watch The Big Lebowski for the bowling. No, the reason you should be reading “Ringside” #1 (and I mean reading it right now instead of this review unless you’ve already read it, in which case go back and read it again) is because it is a pitch perfect opening to a dark, character-focused noir with characters who already feel like layered and real humans. That’s a hard feat to accomplish, but thanks to the expanded page count of this first issue, Keatinge and Barber are able to forego any flashy first issue gimmicks and get right down to the nitty gritty of the character work.

What that means is that “Ringside” #1 is a pretty slow burn first issue, following a retired wrestler (who used the amazing sounding gimmick of being an actual Minotaur) as he’s called back to Los Angeles from his time training wrestlers in Japan. That’s about as much of a comnection to actual wrestling as you get in this issue as the focus isn’t really on the business or the behind the scenes stuff. This isn’t a smark-y shoot podcast that tries to get wrestlers to talk shit about creative. Nor is it the comic version of Ready To Rumble, thankfully.

This is a noir story and Keatinge and Barber smartly keep the wrestling stuff as set dressing while focusing on the mysterious Knossos who clearly harbours a dark past that we only get a glimpse of before thrusting him into a brutal mission to save a friend. If you wanted the unfair comparison, this comic is like of you took “Southern Bastard” amd swapped the football and BBQ for sports entertainment and plain grilled chicken.

This comic marks the major debut of newcomer artist Nick Barber and, without trying to sound too harsh, you can kind of tell. His artwork is, for the most part, pretty solid and his simple and crisp linework embodies the slow burn noir feeling of the book in a way that somehow evoked the cinematography of Quentin Tarantino’s Jackie Brown to me for some reason. However, his simple linework only really holds up in close up panels and even then the lines have a tendency to feel a little messy in places. Pull the panel back a bit and the lines lose a lot of detail, especially in the faces. As a stylistic choice, it works with the tone of the comic more often than it doesn’t, but I can definitely see it turning some people away from the comic.

However, there also feels like there’s a lot of room for Barber to grow as an artist as the series continues as this issue shows that Barber has incredibly solid storytelling and panel layout fundamentals that nail the noir feeling of the script. This is also helped greatly by the colour palette of Simon Gough which perfectly captures the neon glow and heavy shadows of Los Angeles in a way that feels oddly reminiscent of the colour palette of professional wrestling itself with its brightly coloured spandex and makeup. This gives a very strange effect to the comic as the storytelling in the artwork is completely on point, but the detailing in the panels is very loose and I get the feeling that sticking with this comic will give you the opportunity to see Nick Barber grow immensely as an artist.

Overal, “Ringside” #1 wasn’t the Wrestlemania of comics I was expecting it to be. In fact, it ended up being something all together more engaging. Eschewing the smark-pandering gimmicks or Kayfabe-shattering look behind the curtain that could have turned this comic into a one-note joke, Keatinge and Barber focused instead on building character and atmosphere and turned this comic into an engaging noir story that can be enjoyed by anyone regardless of their relationship to wrestling.

Final Verdict: 8.9 – A solid introduction to a brutal noir that, while it features wrestling, is much more focused on exploring the violence of its characters. Definitely one to check out.