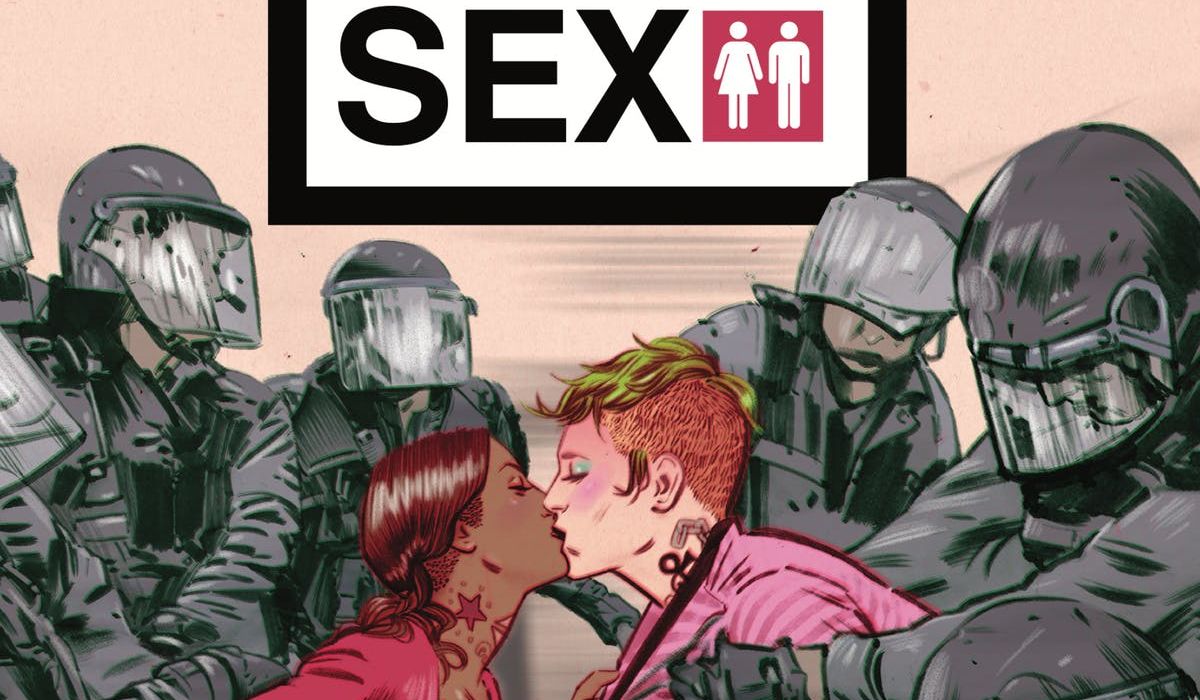 From notorious kink writer Tina Horn and artist Michael Dowling comes a sexy and harrowing thriller unlike anything else on comic book stands. Some Spoilers Ahead! 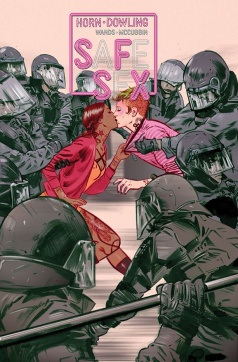 In the near future, sexuality is policed and closely governed. A secret sex club known as The Dirty Mind, run by a group of queer sex workers, is one of the few places the citizens of America can truly be free to express themselves without fear of a terrible punishment, until now.

Originally announced in June 2018 to be a Vertigo Comics release, “Safe Sex” was shuffled around with that label’s future in a state of uncertainty. Landing at Image Comics, the book’s title was altered to “SFSX” and finally saw its release this week. The sexually explicit series has already made quite the splash with a second printing of issue 1 being put in motion prior to its Wednesday release. Everyone on this planet knows that sex sells, and here is the latest example in the world of comics. Thankfully this book does not rely solely on the shock value of sex and nudity as its excuse to exist. There is plenty of intriguing story and political satire to sustain this adult series.

Ten years ago the ultra conservative religious organization known only as The Party gained majority control over America’s government. With each passing day they took greater control over every aspect of each citizen’s private and sexual lives. An underground club called The Dirty Mind is one of that last places where the oppressed citizens of this dark American future can find sexual freedom and experience what they want to without the prying eyes of this disturbing police state.

The story jumps ahead three years: The Party has completely taken over. From the private end of things they are able to monitor everyone’s sex lives through the use of their fascist Fitbit, suitably called a Halo. Every man and woman must file paperwork with The Party’s government center – called The Pleasure Center, built where The Dirty Mind once stood. Avory and George even had to get married so they could stay together. George took a job at The Pleasure Center to help keep he and Avory in a good light with The Party and to help raise Avory’s ‘Purity Score.’ In a grander, out in the open, takeover all women are all but forced to wear bland (both in design and color) outfits, little or equally bland makeup, all to keep women in line and closer to God, in the guise of conservative feminism and women taking back their sexuality and overpowering the devious advancements from men. Even when Avory wears a light pink lipstick to a job interview, the woman she meets with has her wipe it off. Phyllis Schlafly would love the world this comic illustrates.

If you’re one that feels like this is the direction the world, or mostly the United States, has been moving in, this comic will play on your fears of prudish zealots in power. Tina Horn does an outstanding job of jumping from her usual prose and article writing to scripting a comic book. She feels right at home here; and not just because of the sexy subject matter. This near-future, sci-fi-lite premiere is not unlike many of the books released by Image Comics (and other publishers willing to push boundaries).

The world building is detailed without being bogged down by endless exposition and over explanation. History and plot beats move along, feeding us the information we need allowing us to quickly understand exactly what kind of world this is and why we should fear it. This is an impressive debut into the world of comics for Horn. Even for an established author, this medium can mess with the talent of those not used to working within it, but she walks in and takes control of the story right from the first page.

Teaming up with artist Michael Dowling (“Black Cat,” “CLiNT”) was a perfect choice for this series. His way of matching his artwork to Horn’s narrative is exactly the kind creative pairing we all hope for. While Horn’s story is clear, she plays some things close to the chest and Dowling’s illustrations feel the same way. He gives us plenty of detail in each page without giving us everything. You are given plenty to look at, but he has a way of staying away from pure clarity of finer details, especially in the characters’s faces. There is nothing to question, but it allows for some reader/story separation. His character design should also be praised. They all feel like real people. There are no perfect bodies or looks.

When he colors the pages, it’s just one more barrier between our eye and seeing everything. It’s like looking through a smokey room. It is all so beautifully hazy. Like his pencils, he focuses on exactly where he wants to move our eye.

Prior to finishing the issue I was debating on whether or not this could be our Pick of the Week this week. I knew it had to be, either for quality or absurdity. I am just glad that I could add it to this particular column for the former. Because while it would easy to take this concept and make it wacky, bizarre, and fun, all wrapped in a sexually explicit blanket; it works far better as cutting satire of the time we are living in moving in a direction that could be so much worse for all of us.

While I don’t think I would call it a fun read, it was a thoroughly engaging page turner from start to finish. The majority of ideas and themes presented within are nothing most genre readers will be unfamiliar with, but it is how Horn and Dowling bring this story together and to life that makes for something great. It is clever without being annoyingly so, and while told chronologically there are still reveals throughout that feel surprising, as though we should have known these details already. Every reveal makes sense and yet we are left out of the loop until the story calls for us to be on the inside.

With premieres as strong this one it can be hard to keep the quality high in subsequent issue, but this series already feels like it knows where it is going, and won’t be taking readers on an aimless run through an unnecessarily ridiculous story. And just one word of warning: Don’t crack this issue on the train or pull it up on your tablet/phone at the coffee shop (Like I did). This is a book to be read without prying eyes around you. You’ll get a reaction like my wife had, *Through laughter* “What the f*** are you reviewing this week?”

Final Verdict: 9.0, A dark, satirical tale of sexual expression and oppression. With an experienced author who is well versed in kink and sexual literature this is never shocking for shock’s sake. It is a mature thriller for adults by adults.