Just in time for their big-screen release, ‘The Squad’ find their feet in the new DC universe. 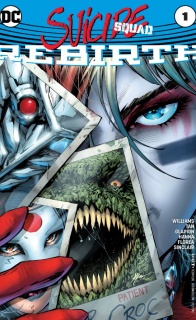 Soldier. War hero. Traitor. Captain Rick Flag was one of America’s greatest military commanders before he was banished to a secret military prison. But after years of isolation, Flag’s life changes forever when a woman called Amanda Waller offers him redemption in exchange for taking on the single most dangerous job in the entire DC Universe: keeping the Suicide Squad alive!

Ooh boy. It hasn’t been the best few days for DC’s most devious Squad. While the film is yet to still get a major release, early critics’ pre-screenings have been, divisive, to say the least. Following in the footsteps of Batman v Superman, Suicide Squad  needed to be all things to all men. It had to capture the familiar tone of the first two DCEU releases, while spicing things up with enough jokes to satisfy those who say Marvel have cornered the market on levity. They needed to provide compelling thrill ride of an action movie, but still somehow find the time to introduce the audience to an ensemble cast of largely unknown second tier characters.

I haven’t yet seen the film, so I’m not really in a place to speak on how successful it is in reaching those goals. However, I have been lucky enough to get an advance copy of “Suicide Squad” #1, the well-timed first issue in DC’s Rebirth run. While comic books may not exactly have the budget of a big screen movie, they also lack the limitations of stuntwork and budget restriction, and they’re usually billed to an audience with at least some grounding in the universe. So with that in mind, how exactly does “Suicide Squad” #1 square up?

Williams’ script is a relatively straightforward affair for a first issue. We open with master manipulator Amanda Waller chatting candidly with a puzzled Prez about the legalities of the ‘Suicide Squad’ program. Williams goes to Great lengths in the first few pages to discuss the necessity of a team willing and able to do things that the majority of Americans simply don’t want to know about. The justification of the existence of this amoral black ops team is all but impossible for our Head of State to fathom, so Waller placates him with the offer of a true blue patriot leading the charge. Namely Rick Flag.

The rest of this year is split pretty evenly between one long fight scene that introduces us to Deadshot, Captain Boomerang, and Harley Quinn, and another scene with Waller musing on the morality of heroism, this time to a reluctant Flag. Leaderless, outnumbered, and outgunned, the trio, who we assume make up the current incarnation of the squad, are in Mongolia, fighting legion of drone-like metahumans who have been created under duress by a kidnapped American scientist.

The patter Williams offers between these three characters is pretty entertaining, although nothing we haven’t really seen before. Harley is saccharine sweet as she slaughters her way across the deserted city. Deadshot is stoic but ruthless, and Captain Boomerang is… Australian? And rude too I guess. There’s actually a pretty funny exchange between him and Deadshot where Deadshot calls Cap a “stupid racist” for conflating Mongolians with Chinese people, and after reading it a couple of times I’m still not sure if Williams appreciates the irony of chastising a character who is himself such a thinly veiled racial stereotype.

Waller and Flag’s conversation is more nuanced, but still relatively by-the-numbers. When they meet Flag is in prison for disobeying orders that he knew would get his whole squadron killed. He argues against joining the team initially, but given that his other option is… more prison… it doesn’t take Waller too long to convince him. A noble enough guy, it doesn’t take much more than a mention of redeeming himself and potentially saving innocent lives to get Flag on board, and while I understand the importance of having a moral centre on the team, it might have been interesting to see him join for more selfish, or at least complicated, reasons.

Tan’s artwork is convincingly kinetic, and he makes use of a lot of subtle motion markings to really make his panels pop. His character design is clearly inspired by both the movie costumes and more comic accurate fare, and the result is pretty satisfyingly silly as well as recognisable for anyone just checking in after seeing the film.

Something that I do find quite interesting about his work in this issue is what he’s chosen to focus the majority of his panels on during the big fight sequence. Almost every bit of action homes in on one of the Squad shooting something off-panel, meaning that we get a lot of visually suggested violence, without much confirmation. Perhaps this is the result trying to court a wider audience, but to me it slightly declaws a team who are supposed to delight in death and destruction if we don’t get to actually see any of the carnage.

Tan does his best to provide us with a vague, electric Kaiju for a final ‘boss-battle’ scene, but with so little narrative focus placed on the specifics of the action at hand (instead skewed to getting Flag excited about life outside of prison) it’s difficult to feel any real terror for our fledgeling team. It’s a shame, because Tan hints at some really epic combat moments in the final pages of the issue, but it draws to a close before the build up really gets a chance to explode.

I struggled to come to a strong conclusion about my feelings for this issue. There’s nothing particularly wrong with it, but it doesn’t offer up anything remotely new on the ‘team coming together in a time of crisis’ formula, and it feels as though it spreads itself so thinly with regards to character introductions that we end the issue no more sure of exactly why anyone in particular is involved in the skirmish in the first place. As far as I’m concerned, it echoed some of the less vitriolic complaints leveled at its big screen counterpart. Well it’s not exactly bad, it simply feels a little too forgettable to truly shine as one of the stars of the new ReBirth pantheon.

Final Verdict: 5.8 – There’s a lack of precision in this issue that just made me struggle to get invested in any of the goings on. More a shouty shamble than a ballroom blitz.