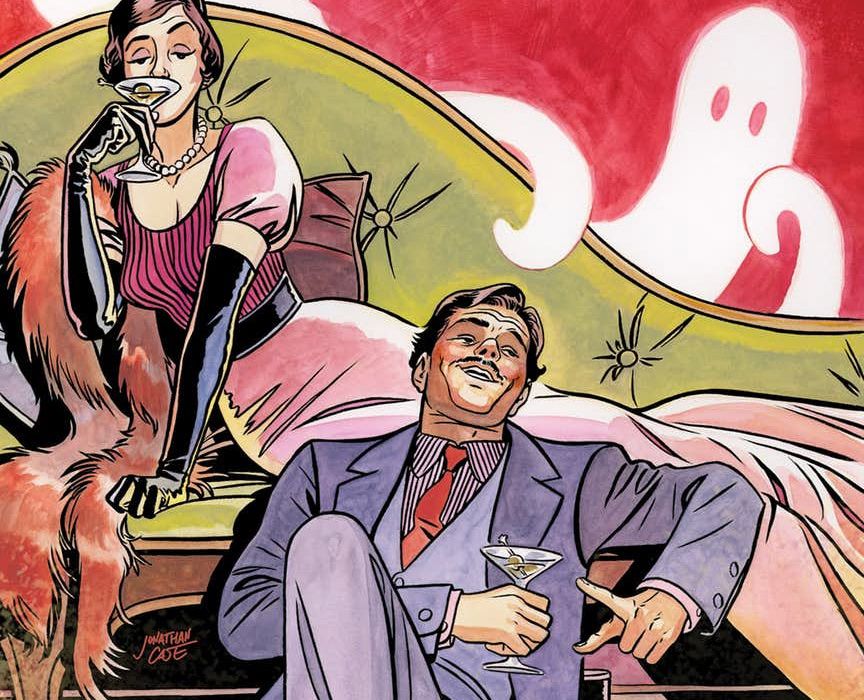 The popular podcast and occasional stage show by Ben Acker and Ben Blacker, “The Thrilling Adventure Hour” makes it’s triumphant return to comics after a few years. Having been once published at Image, now the Bens are coming back to the medium through Boom! Studios to deliver a brand new tale with a fantastic creative team. Let’s see if these folks can still deliver a gripping tale just like the old days. 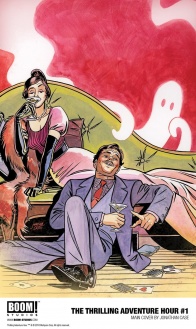 Writing team Ben Acker and Ben Blacker (Deadpool, Death Be Damned) return to The Thrilling Adventure Hour in this new series based on the wildly popular Hollywood stage show and podcast. Frank and Sadie Doyle are the toast of the upper crust. Headliners on the society pages. And they see ghosts. Follow the Doyles on a night when having a drink (or ten) with friends goes horribly, and perhaps predictably, wrong at a haunted house.

The Bens (as I will refer to them for simplicity’s sake) have a very confident and strong tone they inflict through their characters here, as one naturally would after working on a property for so long. There’s a lot of campiness and self-aware comedy inflected in the tone, giving this a very light-hearted feel. It’s present when we are first introduced to Frank and Sadie Doyle, they go back and forth for a few panels on what Frank’s most winning trait is, and how Sadie shares it. It’s a great way to establish the kind of characters these are before we get into the meat of the narrative so that this over-the-top niceness and absurdity can be paneled back later. However, the snappy dialogue continues throughout the piece, unabashedly showing the Bens’ stage show heritage. When Adam appears in the Doyle’s residence, he goes through panels of different emotions, staggering out his name and how he’s at the end of his rope. It has the rhythmic feel of a performance and is a lot of fun to follow.

I also love the overtly self-aware parts of this narrative. The sections with the detective have a great noir-esque feel to them, with short punchy sentences describing the situation in ‘flowery’ detail. The use of terms like “the old grey lady” is fantastic, giving us context without overtly stating it. The constant questioning and accusatory tone of it gives it a very hard-boiled tone. The meta-narrative present in the Sadie and Frank sections is a little less workable for me, however. Once in the haunted house scene, the characters all seem to operate on the same train of thought, answering each other’s questions and finishing each other’s sentences. It’s very camp, and works when they answer questions with vague answers, like “How can you tell it’s a ghost? This is what a ghost feels like”. Unfortunately, sequences like the blood-writing on the wall can be a little withdrawing from the narrative. It works on a comedic level when Frank says “I do not take orders from walls”, but when Donna Henderson muses that blood can’t just “spontaneously generate” it feels a little obvious and detracting.

What works for me is that there seems to be an equal importance across all the characters, regardless of whether they are one of the Doyles or even male or female. The Doyles work as the core of the book, as bringing the narrative back to them after focusing on Adam or the detective always centralizes the story for readers. Yet the Hendersons work equally well almost as the point of view characters, witnessing the Doyles’ professionalism in the field and acknowledging the situation as we would. When the Doyles ask if the haunted house if everything we thought it would be, the Hendersons act in surprise as we might, saying “I thought there’d be cobwebs”. Even Adam, the ‘renter’ of the house, has a role in inciting the key incident of the story and feels like a down on his luck young person who just got happened to draw the short straw. There’s no one here that doesn’t feel relevant to the plot, giving the story a driving pace and making sure no space is wasted on unnecessary details.

The art here is handled by M.J. Erickson, who brings a crisp and modern cartoon style to the book, pairing well with the light comedic energy. Tonally, it feels right in line with the era that the Bens have invoked for this story, with lots of expressive characters in comically dynamic situations, not unlike a silent film. The scene of the detective narrating over Adam trying to find help expresses this style the best, as we get a lot of Adam’s storytelling from watching his hand movements and facial actions in conversation with the shady character sipping his drink and writing down details at the table. Similarly, the consistent, cocky facial look of the Doyles gives a sense that they are together the proud, sleuth-solving couple straight from the golden age of detective fiction, never flinching in the face of danger. Yet the aesthetic is cartoony enough that this never feels bogged down. Erickson’s use of clean lines and simplistic yet realistic body shapes makes this feel bright and positive and gives an old-timey setting a nice modern finish.

The setting work here is subtle, but for the most part, works well. Erickson gives busy scenes a lively feel, populated with people to feel like a genuine city center. The opening exemplifies this the best, with the detective strolling through the humble streets filled with just enough silhouettes and figures to give it a noir feel, but not quite dreary enough to bog it down in misery. The club that the Adam enters is just as fun, with high tables and a close-up camera angle to tell the reader that this is a crowded place. However, beyond that, the setting feels a little lackluster, making it feel more like the sectioned corner of a stage play than the infinite world of a comic book. Settings feel a little stock standard, with most of the scenes in the Doyle house taking place on an olive green wallpaper. Erickson does populate the panels with nice, dating objects like bar trolleys and luxurious lounges, but for the most part, it feels a little shallow and haphazard. Similarly, the haunted house is somewhat featureless. Granted, it works with the narrative, with even the characters acknowledging that this isn’t their expected portrayal of a haunted house, but it doesn’t even have the feeling that a down-on-his-luck Brooklyner has just moved in here, most of the rooms are empty save for the horror features.

This book boasts one of the most vibrant and warm color palettes I’ve seen of late in a comic, which is all handled by Brittany Peer. Everything has the look and feel of a classic painting of early 20th century America, with the opening Detective scene having a classic yellow and faded blue tone to kick this off. There are other fantastic examples of this, with the use of spotlights on interior scenes giving it an old sitcom tone. And the fashion feels perfectly pastel and smooth. I love Frank Doyle’s Holmes-esque blue suit, I love Sadie’s classical mauve dress with lavender gloves. It’s all lovely and old-timey, yet Peer seems to give it an inner glow and class that makes it feel modern and stylish at the same time. The final, dark haunted house scene has a great, campy seaweedy glow to it, throwing me way back to playing Cluedo with my family. It’s a great balance of muted tones that still have nice saturation to give it a lighter, comedic tone. It’s perfectly in line with every goal the book sets out to achieve.

Much like it’s prior stage shows and podcasts, Ben Acker and Blacker manage to translate “The Thrilling Adventure Hour” into a campy and infectiously fun debut. The comedy is well paced and self-aware, the art is charming and balances realism with cartoonish style, and the coloring is warm and beckoning. The settings leave a little to be desired at times, but this remains to be a must-read for fans or anyone interested in Acker and Blacker’s campy love-child.

Final Score: 7.7 – “The Thrilling Adventure Hour” lives up to its name, delivering well-paced, campy and self-aware thrills, with solid art and warming colors.