Bunn and Land’s explosive first issue fires a warning shot at everyone who thought that Mutants would go down without a fight. 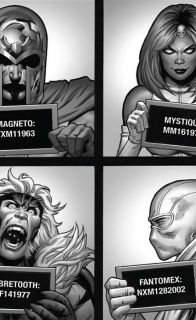 In a world that’s never hated or feared mutants more, there is only one constant: BIGGER THREATS REQUIRE MORE THREATENING X-MEN. Refusing to accept one more mutant death, the most ruthless mutants on Earth have banded together to proactively mow down their enemies. But with a team populated by relentless killers, one question applies above all others: Can they stay away from each other’s throats long enough to sever their targets’?

It’s feels like only yesterday that Brian Michael Bendis’ sprawling run on “Uncanny X-Men” drew to a close, but time moves differently in the Marvel universe and, if this stalwart title can be used as a litmus test for the state of mutant-kind, its clear that times have never been darker for Marvel’s perennial outcasts.

Bendis’ X-Men felt was characterised by introversion, focussing mainly on inter-faction rivalries, the fallout of the loss of one of mutant-kind’s most influential philosophers, and what that might mean for the future. By comparison, “Uncanny X-Men” #1 already looks to be a very different beast. Bunn’s team, currently comprised of Monet, Sabretooth, Psylocke, Archangel, and headed by a satisfyingly vengeful Magneto, feels much closer in tone to Remender and Opena’s “Uncanny X-Force”, and barrels out of the gates with a full-issue, no-holds barred, action sequence.

Things are looking dire for mutants of the Marvel U right about now. With the emergence of the Inhumans and widespread Terrigenesis spelling death or sterilisation for anyone with an X-gene, mutants are once again on the back foot in a big way. Bunn’s iteration of “Uncanny” feels perfectly reflective of this new status quo. His team are an obviously reactionary group, drawn together not for some higher purpose, but simply because they’re all mutants who refuse to go down without a fight. And it looks as though there’s going to be plenty of fighting to be done if this issue is anything to go by.

Bunn doesn’t waste time re-introduce us to a group of characters that most X-Fans will be very familiar with, instead he uses his page-space to clue us into the state of mutants at large. Since the fear of Terrigenesis has hit hard amongst the mutant community, many  civilian mutants have been looking for increasingly extreme methods of self-preservation, and the newly introduced ‘Someday Enterprises’ seem happy to oblige, although it’s possible (and likely, considering mutant-kind’s previous track record with shadowy organisations) that there’s more to them than meets the eye.

This is a team of mutants who are all more than comfortable with wetwork, and Bunn is well aware of it. As a result, they approach their rescue/assault mission with all the gusto and flair that we’ve come to expect from an ensemble mutant book. Bunn displays individual characters and their places within this dysfunctional team with ease: Magneto soars in from above, monologuing with a confidence that feels reminiscent of his BoM days, Sabretooth and Monet balance their brutality with a levity that helps to keep the book for feeling too Grimdark, and there’s a weight to the tortured relationship between Psylocke and Archangel that helps tether the book to X-Men stories of the recent past. That relationship, in particular, has been relatively inert in the X-Universe for a while now, so it’s be nice to see Bunn advance it in the pages of this book.

Given that this issue is almost entirely action, Land had quite a job on his hands ensuring that his audience didn’t become numb to the repetitive action. Pairing up the team as they attack, he manages to keep the issue fresh throughout by creating a strong distinction between each mutant’s fighting style and physicality. he contrasts the bestial nature to Sabretooth’s physicality that nicely with Monet’s carefree confidence (being bulletproof, super-strong, and able to fly must take some of the fear from a fight). While Magneto hovers above the action and dictates the play like a season quarterback, Land’s Psylocke gets stuck in, making it painfully obvious that, when you’re as good with a blade as she is, you can bring a knife to a gunfight.

But what’s most interesting to me about this fight is that Land makes it clear that none of our team is even breaking a sweat taking out the first wave of Someday’s goons. Land matches Bunn’s quippy, humorous script with a relaxation and confidence in his facial expressions which promises there are unseen depths to these characters that we’ve yet to see. I finished the issue both satisfied with the action I’d seen and excited to discover what lengths this new team of old faces might be willing to go to to protect their species.

This book feels different from its predecessor in almost every way. while Bendis was introducing new mutants to the world, Bunn’s being forced by the Marvel U at large to tighten the restrictions on mutants, opting for a smaller cast of familiar faces. Bendis’ “Uncanny” focussed heavily on esoteric musings on mutant-kind’s place in society, while Bunn’s X-Men are more concerned with the basic matters of survival. The most notable difference though, at this early stage, is probably the amount of violence on display. Given the previous X-Books focus on in-fighting, there was little out-and-out conflict, and even fewer deaths. Bunn’s X-Men are most definitely being attacked from the outside, and so, hated and feared once more, it seems as though we’re going to see just how fierce a cornered mutant can get. And I for one can’t wait to find out.

Final Verdict: 7.8 – A double-barreled opener of a book to remind the Marvel Universe that, while the X-Men may be down, they’re certainly far from out.