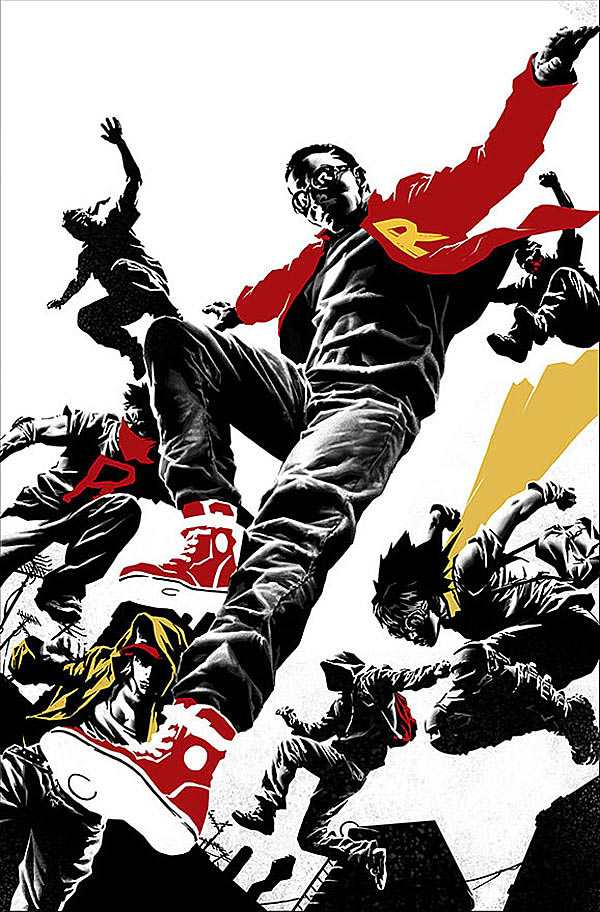 Following Bruce Wayne’s “death” in ‘Endgame’, a group of Gotham City kids take up the Robin mantle to save their city. But are they up to the challenge? Find out in our spoiler-free review below. 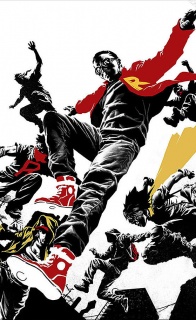 Spinning out of the pages of BATMAN! The teenagers of Gotham City have adopted the “R” and made it their own. A new Robin? No, HUNDREDS of new Robins! Don’t miss the start of this new series from rising star writer Lee Bermejo (JOKER, SUICIDERS), who also provides the covers!

Robin serves a vital role to the Batman mythos. All jokes about how weird it is for a grown man to hang out with kids in tights aside, every Robin has been the light guiding the Dark Knight’s way. He’s the proof that Batman is changing the city for the better from the ground up. If not for Robin, Bruce Wayne would be an angry industrialist who beats up the poor. There would be a vigilante stalking the streets of Gotham without Robin, but there would be no Batman if that makes any sense.

Recently, things haven’t been going too well for Batman, his Robins, or Gotham City. Batman “died” fighting the Joker, Dick Grayson is off in his own book talking about his penis, Damian is hanging out with ninja monsters, and you could not pay me to find out what’s happening with Jason Todd and Tim Drake. And without any heroes, Gotham has fallen into pseudo-dysfunctional state where its inspirational figure has been replaced by a cop inside a robot. Clearly, something needs to change.

And that change comes in the form of five kids, inspired by the legacy of the Bat, who are now carrying on his work as Robins. Despite the issue being heavy on exposition, “We Are Robin” #1 doesn’t go into too much detail about the new kids on the block. Instead, we’re introduced to our would-be POV character, Duke Thomas. Duke has been a figure within Snyder and Capullo’s run in “Batman” for a while now and “We Are Robin” is his step into superherodom. After losing his parents to the Joker in ‘Endgame,’ Thomas vows to find them no matter the cost.

While “We Are Robin” #1 chooses to focus on one character over the team, Thomas’s story is essential to understanding the new status quo for Gotham. Things have gone sour since Bruce Wayne allegedly bit the dust and Thomas has been hit hardest. Approaching this story from a grounded perspective helps add onto the idea that Thomas doesn’t want to necessarily be a super hero, he just wants to do he can to find his family within the circumstances he’s been handed. Not to get too political but there’s some powerful, likely intentional, imagery behind a black teen looking to find a way beyond the cop outfitted with heavy duty weapons. More than anything, Thomas is an unquestionably fresh voice among the cast of DC characters and his youthful energy is demonstrated in Corona’s artwork.

Gotham may be worse than it’s ever been, drabbed in a more dour than usual palette by colorist Trish Mulvhill, but damn if it’s still not breathing. Corona’s on point when it comes to exhibiting the fiery momentum that encapsulates a Robin’s style, or Thomas’s parkour in this case. Plus, he can shift between moods at an instant. The charming repartee between Thomas and Leslie Thompkins quickly gives way to massive fight in Gotham’s underground to an exceptionally foreboding “post-credits scene.” That tonal range is important for a major reason: this isn’t a Batman title. Batman can afford to be gloom and doom but Robin can’t. Corona’s art reflects the versatility of the character of Robin in a way that honors the spirit of Robin while simultaneously being super cool to experience.

As I mentioned before, this issue focuses mostly on Thomas so I can’t really judge it based on its team. That said, it’s clear that Beremejo and Corona have a clear grasp on Robin’s place in Batman mythology. There’s this interesting theme throughout Snyder’s work on various Batman titles about Gotham’s citizens, or at least Batman, being symbiotic with the city. It’s a living reflections of its inhabitants and their traits. The Gotham of 2011 on isn’t just a setting, it’s a character. And in “We Are Robin”, it’s a character that desperately needs saving. And just as some Robin or other has been there to kick Batman back into shape, The Robins will do the same for Gotham.

Final Verdict: 8.4 – What I like about “We Are Robin” #1 is that no one is really fighting a designated enemy so far. It’s much less a battle to stop ANGRY DICK GUY from killing everyone as much as it is a battle to save Gotham’s soul. If you like Batman, you’ll like this. If you’ve always appreciated Robin more than grumpy Bruce Wayne, you’ll freaking love it.