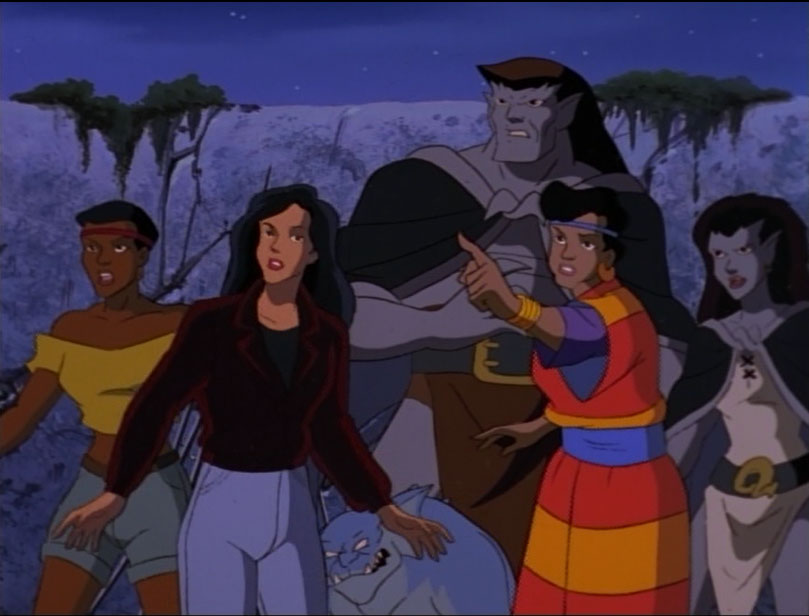 This week on our Gargoyles retrospective, Goliath, Elisa, Angela and Bronx go to Australia and Nigeria in “Walkabout” and “Mark of the Panther” (aired respectively on February 7, and February 8, 1996), bumping into familiar faces both times.

1. There’s a Dingo, But He’s Not Stealing Anyone’s Baby

In “Walkabout,” the Avalon tourists reunite with former Pack member Dingo, wandering in the Outback while guarding his pregnant old boss Fox, and her mother Anastasia (Kate Mulgrew, in her first appearance). The mother and daughter are overseeing the development of Matrix, a nanotechnology program that transforms the earth and anything in its path into metallic architecture. Ostensibly a way to speed up building work, the Matrix naturally gains self-awareness and seeks to impose its ordered design on the whole planet.

After an unsuccessful attempt to deactivate the program, Dingo and Goliath, with the help of Dingo’s Aboriginal friend, undergo a spirit quest to the Dreamtime, where they commune with the AI and convince it to impose order on a chaotic world by instead helping serve law and order – the nanomachines bond with Dingo’s power armor, and together they resolve to become an Australian superhero. The episode proves to be a lovely redemption story for Dingo, who clearly regretted the Pack’s turn to villainy, as well as a fun fantasy about how a dingo can protect a woman and her baby instead. 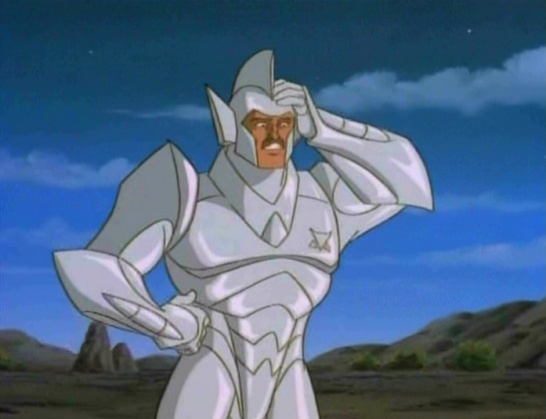 2. Ahead of Its Time

With its “grey goo” scenario (a term used in the episode itself), “Walkabout” is very much a story of its time, but it feels strikingly original in many ways: its use of the name Matrix for an AI that engulfs the whole world preceded the Wachowskis’ movies by a good few years, and its surreal Dreamtime sequence, while very much a spiritual sequel to the earlier virtual reality episode “Legion,” beat The Simpsons‘ hallucinogenic experience in “El Viaje Misterioso de Nuestro Jomer (The Mysterious Voyage of Homer)” by a whole year! Meanwhile, Matrix’s bonding with Dingo’s power armor means he got a personal AI years before Tony Stark did in the “Iron Man” comics – I feel this episode deserves to be looked at more for how it saw AI as a potential force for good, while everyone else’s heads were still swimming with visions of HAL 9000 and the Terminator. 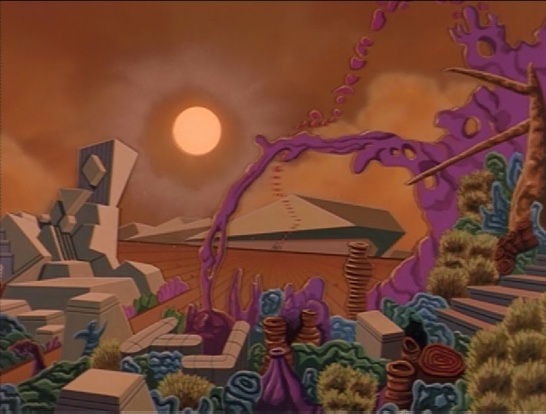 That said, the Dreamtime does look very '90s.

“Mark of the Panther” opens with hunter Tea Gora (Roxanne Beckford, who also voiced Elisa’s sister Beth) and her two compatriots sneaking up on and killing a black panther. I was concerned, given this was the decade of Captain Planet, that we’d be in for a preachy poaching story, but thankfully we got something a lot darker and complex – it turns out, Tea Gora is a werepanther, unable to live a normal life and seeking revenge on the one who bit her – turns out, it was none other than her ex-boyfriend Fara Maku (Don Reed), who gained the curse in a deal with the spider god Anansi (an unrecognizable sounding LeVar Burton) to prevent her from moving to the city. It’s an important story about how love can turn toxic and possessive that still sadly feels like it needs to be told – it was great to see the seemingly mad Gora turn out to be hero of her own story.

So following the introduction of Fox’s mom, “Panther” continues the theme by reuniting Elisa with her mother Diane (Nichelle Nichols), who’s visiting a Nigerian village for… research I think? (Greg Weisman stated she’s a professor of African studies.) Anyway, Diana lays out the backstory for the episode by narrating the origin of the werepanthers and Anansi for the village’s children, which is depicted in a completely different style to the rest of the show. It’s not an extraordinary diversion, resembling a segment from ’90s educational anthologies like Adventures from the Book of Virtues (which launched later in 1996), but it stands out, and makes you wonder if exposition in previous episodes could’ve been presented in a similarly stylized manner. 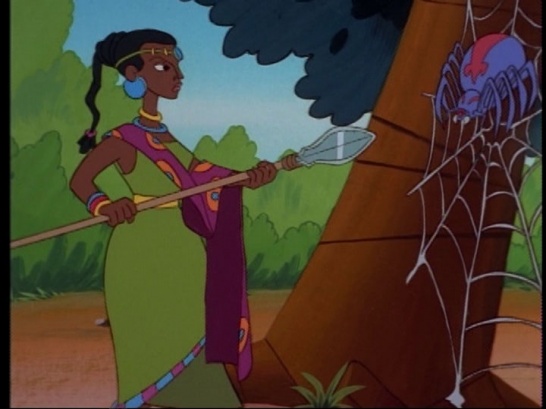 Spears: Anansi's one weakness.
Continued below

5. Learning from the Mother-in-Law

“Panther” was the first time Goliath hanged out with one of Elisa’s parents – it’s weird she didn’t tell them about her supernatural friends after they learned the truth about Derek, but I suppose the writers didn’t want their first meeting to take place offscreen. It was a lot of fun to see the headstrong Maza women’s clash of personalities, and for Goliath observe parenting from someone who’s basically his in-law. It was plain delightful to hear Nichols reading the lines where she insists she doesn’t need Goliath to look after her too, or when she cries out, Indiana Jones-style, that she hates spiders.

So to recap, the show had Jonathan Frakes (Riker) as Xanatos, Marina Sirtis (Troi) as Demona, Nichols (Uhura) as Diane Maza, Michael Dorn (Worf) as Coldstone, Brent Spiner (Data) as Puck, and within the last three episodes we’ve covered it brought in O’Brien, Janeway, and La Forge – you’d think this show was being recorded between filming takes on the Next Generation movies…

Bonus thoughts:
– Dingo’s Aboriginal friend sounds more like a Jamaican.
– Dingo calls Goliath handsome, as if his camp appearance wasn’t enough of a clue.
– It’s nuts that Avalon has no idea if it’s sending the tourists over a waterfall or not: good thing that boat is indestructible.
– Elisa got a giggle from me for yelling at Anansi, “Dream on Spider-Man!”
– Goliath straight up kills Anansi (or at least his physical form) – I guess there’s different rules for gods, but it’s funny how straightforward it is given all the previous handwringing about killing on this show.

See you next week for the return of “Pendragon” and Odin’s “Eye of the Storm.”