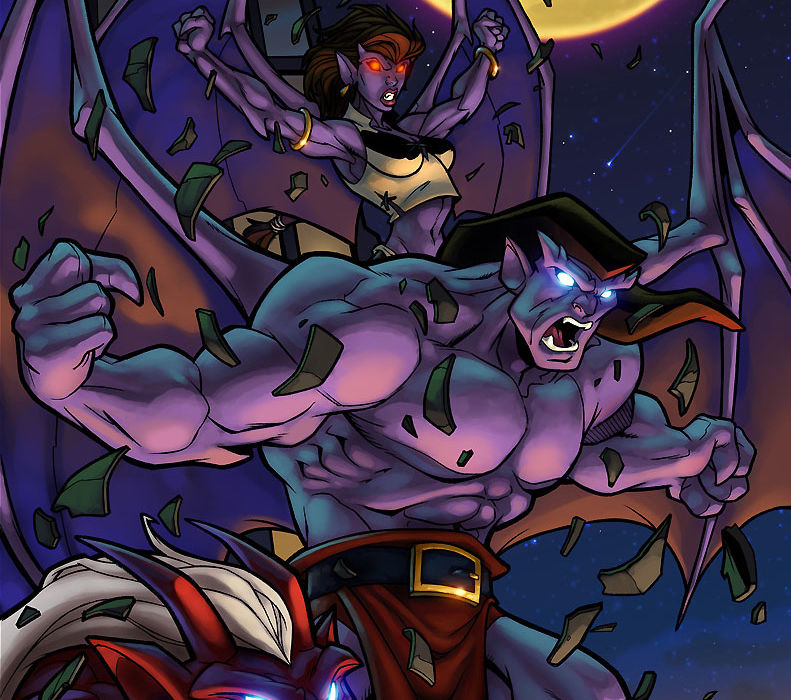 Disney’s cult classic series Gargoyles recently marked its 25th anniversary, and is beginning to find a whole new audience on the Disney+ streaming service. The possibility of the show’s revival has never been higher, and with that in mind we decided to take a look at the seven known proposed spin-offs, which were developed by the show’s staff – including creator Greg Weisman – during the second season in 1995.

According to Weisman, the pitches were conceived after Michael Eisner decided against buying the then-financially troubled Marvel Comics, and to instead turn Gargoyles into a universe to rival them and DC Comics. The CEO encouraged the creation of the season’s many backdoor pilots, and while none of them were picked up as a result of Disney’s purchase of ABC, many concepts resurfaced in SLG Publishing’s short-lived comics revival. So without further ado, here’s a rundown of all of them.

NB: A special thanks to the Gargoyles Wiki for collecting Weisman’s comments about the spin-offs at the fansite Station Eight. 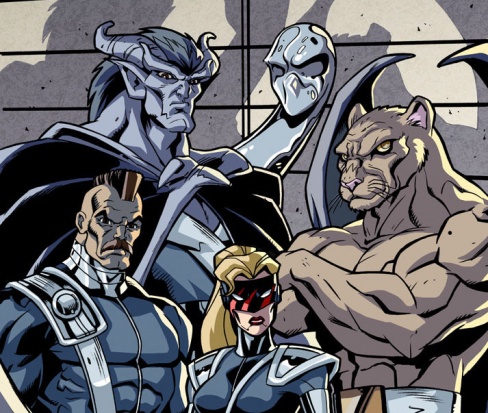 The sole idea to be turned into its own comic at SLG, “Gargoyles: Bad Guys” (written by Weisman with art by Karine Charlebois and Christopher A. Jones) saw several reformed villains being recruited into an international peacekeeping team known as the Redemption Squad. The team consisted of the Hunter Robyn Canmore; the former Pack member Dingo and his AI armor Matrix; the Japanese gargoyle Yama; and the mutate Fang. The series only lasted four issues before the license expired in 2008 (and Disney rendered SLG unable to afford renewing it), although two more issues were published in the trade paperback. 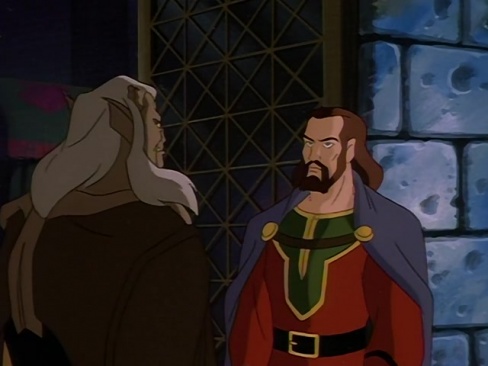 Hudson and Prince Malcolm in 'Long Way to Morning'

A prequel set before any of the show’s flashbacks to Medieval Scotland, Gargoyles: The Dark Ages would’ve begun in 971 AD, and explored the alliance between Hudson’s gargoyles and Prince Malcolm. Weisman intended to overcome the issue of 10th century gargoyles not having names by giving the characters internal codenames for the staff to use, or to have Prince Malcolm give names to each of his warriors, names that the gargoyles would’ve ignored but were still helpful to the audience. The show was pitched to CBS, and Weisman mulled making it the next comic book after “Bad Guys.” 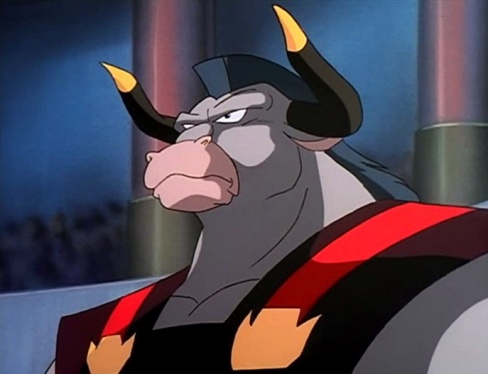 Taurus from 'The New Olympians'

The episode “The New Olympians” introduced an advanced island populated by descendants of the creatures from Greek mythology, which was originally a concept developed by writer Bob Kline at Disney before Gargoyles was conceived. The retrofitted spin-off would’ve depicted New Olympus’s leadership finally revealing themselves to the rest of the world, after the young, idealistic Sphinx rescues the human castaway Terry Chung. Their burgeoning romance alarms members of both their species, while a faction of New Olympians tries to bring back the days humanity worshipped their ancestors as gods. David Xanatos and a clan of gargoyles on New Olympus would’ve also made their presence known over the course of the series. 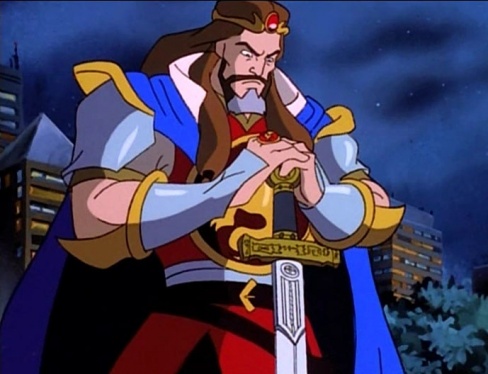 King Arthur and Excalibur in 'Pendragon'

A continuation of the episode of the same name, Pendragon was meant to follow King Arthur and the London gargoyle Griff on their quest to find Merlin. Some of the plans for the series were folded into SLG’s main “Gargoyles” comic, where Hudson, Lexington and MacBeth reunite with Arthur and Griff to stop the Illuminati from stealing the Stone of Destiny. It would’ve delved further into the Illuminati, revealing the integral role Sir Percival and the Holy Grail had in its founding, and Weisman heavily hinted it would introduce more surviving Arthurian characters like Morgana le Fay, Nimue, and the Green Knight (and possibly even the Questing Beast). Unlike the previous concepts, which generated artwork shown regularly at conventions, this was only pitched verbally. 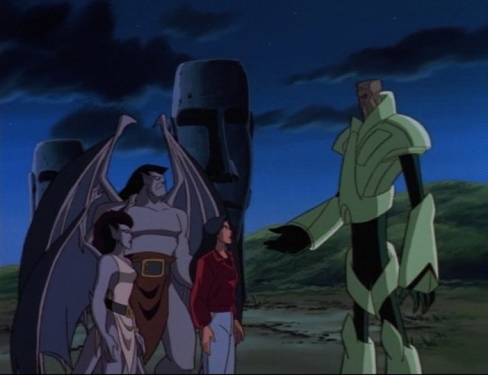 Goliath, Elisa and Angela with Nokkar in 'Sentinel'

As suggested by the title, Gargoyles 2198 would’ve taken place two centuries after the original series, and seen Earth invaded and occupied by the Space-Spawn first mentioned in “Sentinel” (the series’ sole foray into the extraterrestrial). The proposed cast were primarily descendants of long-dead characters from the original show, like the Resistance leader Samson (a descendant of Goliath), but it also included long-lived ones like Nokkar (the friendly alien Sentinel), Owen Burnett, Demona, MacBeth, Coyote, and a “timedancing” Brooklyn. As well as the Space-Spawn, villains included the Quarrymen (who sought to blame the gargoyles for the invasion), and the Illuminati (the Spawn’s willing collaborators). CBS briefly expressed interest in the concept. 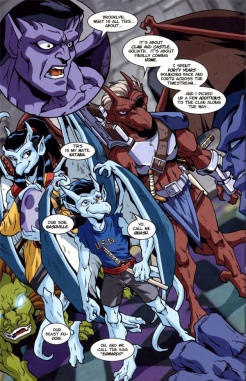 Brooklyn’s “timedancing” was, according to Weisman, something he “came up with too late in the game,” and was “never seriously considered” by any network. A truncated version appeared as the final arc in SLG’s main “Gargoyles” comic (only printed in trade): the Phoenix Gate reappears to the beaked gargoyle, and begins whisking him through time.

In the final chapter, Brooklyn reappears to his friends in the present day, but is now 40 years older, and with a Feudal Japanese mate, two children, and a fu-dog in tow. Weisman intended to explore Brooklyn’s journey with his own miniseries after “Dark Ages” and “Pendragon.”

The most unlikely entry on the list is a spin-off of “The Hound of Ulster,” which introduced the characters of Rory Dugan, the reincarnation of the Irish hero Cú Chulainn, and Molly, who turned out to be his nemesis Banshee. Weisman has only said he “had further plans” for “Molly & Rory as a couple,” which he compared to Moonlighting, while also admitting the notion of their own show “didn’t seem viable.”

As well as all these, Weisman has spoken about how he’d have liked to have incorporated The Tempest, Dracula, and even Santa Claus into the universe, as well as a unique take on the fall of Atlantis. When asked about other Disney characters like Robin Hood or Aladdin, or a figure as potentially controversial as Faust, he responded “Yes. Given enough time and episodes, everything was fair game.” (He’s even said Les Misérables is canon since it’s public domain.)

With any luck, Gargoyles will be popular enough on Disney+ to greenlight a revival, and perhaps this expanded universe will live again, whether it’s on screen or the printed page – but for now, the spell leaving the property asleep remains unbroken. 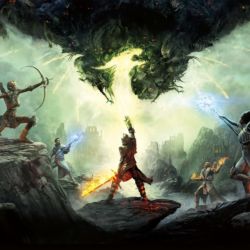 Over the holidays, I began to hear the Calling: no, not that one, rather, my brain kept reminding me 2022 could be when we finally learn the release year of Dragon Age 4, BioWare’s long in-development follow-up to 2014’s Dragon Age: Inquisition. Whether the video game comes out next year or (sigh) 2024, hopefully we’ll […] 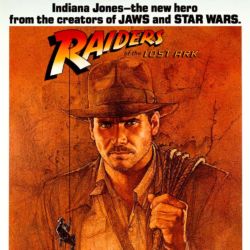 Welcome back to We Want Comics, a column exploring various intellectual properties — whether they’re movies, TV shows, novels, video games, or whatever else — that we would like to see adapted into comic books. This time round, we’re looking at Indiana Jones, the Ghostbusters, Dirty Harry, and more.Indiana Jones:This summer marked the 40th anniversary […] 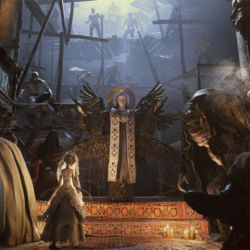 With the 25th anniversary of the Resident Evil franchise, we have had various projects pop up, including two video games (Resident Evil Village and Resident Evil 4 VR) and an animated Netflix series (Resident Evil: Infinite Darkness). However, with some exceptions, we have not had much in the way of canonical comic books for the […]