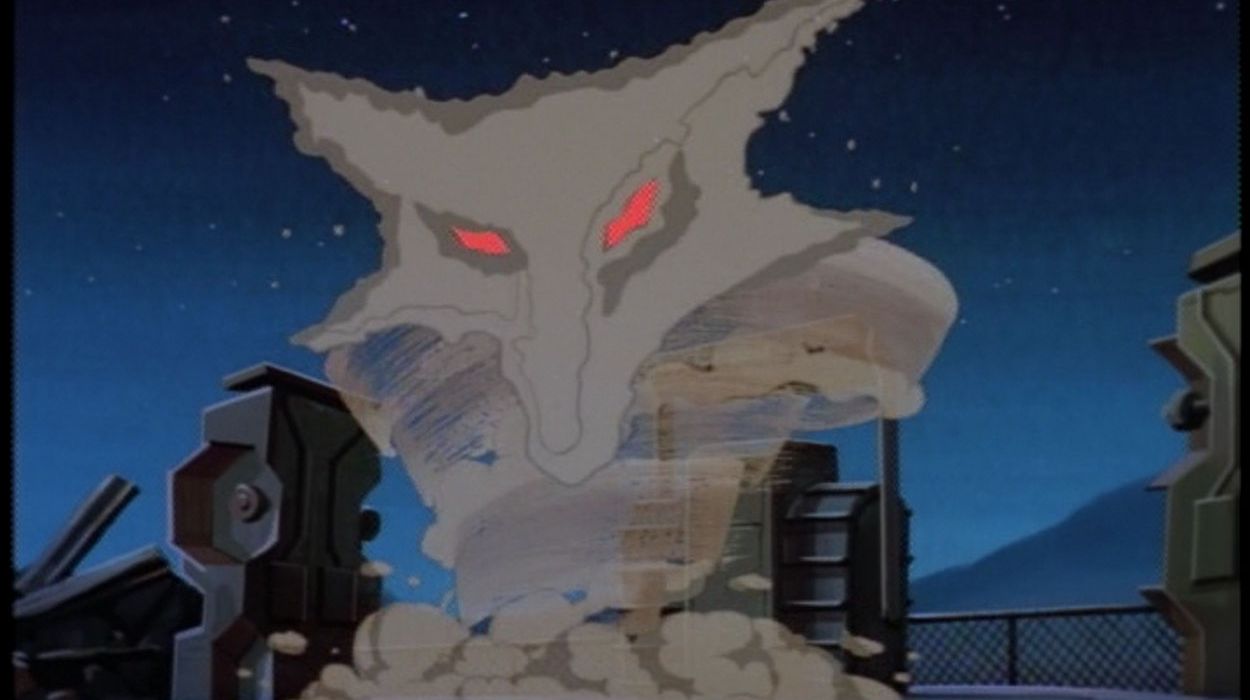 1. Well That Was Weird

“Sentinel” takes us to Rapa Nui/Easter Island, where Elisa gets captured and her memory wiped by an alien – that’s right, turns out the legendary Moai statues are representations of Nokkar (the majestic Avery Brooks), who’s been posted on this planet for a thousand years to guard against a potential invasion from an enemy faction, whom he mistakes the gargoyles as scouts for. However, despite the loss of her memories, Elisa’s instinctive trust of the gargoyles leads Nokkar to realize they are not his enemies, explaining his technology only affects false or implanted memories. Realizing he may have been cooped up alone in his flying saucer for too long, Elisa suggests Nokkar befriend the archaeologists she bumped into on the island (Lydia Duane and Arthur Morwood-Smyth, who were first seen excavating the Scrolls of Merlin in “A Lighthouse in the Sea of Time“). 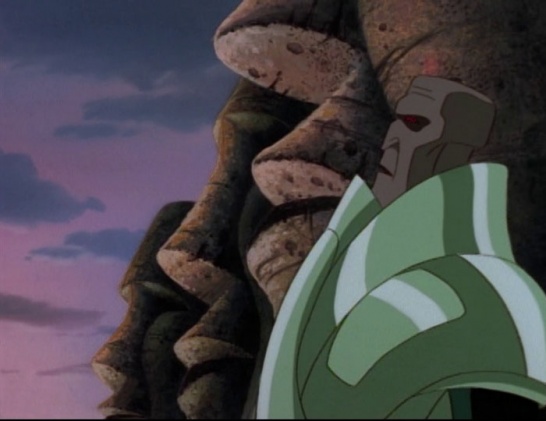 Nokkar is a mouth breather too apparently.

I’ve noticed the show’s similarities with the Highlander franchise before, and this is also very reminscent of that series’ bizarre turn into the extraterrestrial. As Elisa wonders before the episode ends, how does Nokkar know his people’s enemy are still a threat? What I want to know is: why is Nokkar so convinced the gargoyles are military scouts, not refugees? Do they look like his enemies? Are gargoyles descendants of aliens? Like “The New Olympians,” this feels like another backdoor pilot, especially with the surprise reappearance of Duane and Morwood-Smyth, who feel like they’re very much here to make the unrealized spin-off seem less like the universe going on a weird tangent.

Aliens are the least of Indiana Jones and the Kingdom of the Crystal Skull‘s problems, but “Sentinel” did make me recall an essay by medical anthropologist Emma Louise Backe, who explained the idea of ancient astronauts “undermine the achievements of the culture, [whereas] the ghosts released from the Ark of the Covenant lend validity to the spiritual beliefs of the cultures that worshipped the artifact.” There’s something low-key racist about the notion people like the Egyptians and Mayans wouldn’t have built their mighty civilizations without outside intervention; similarly, it’s a shame that in Gargoyles‘ one episode starring Polynesian culture, it took one look and went, “Nope – aliens.”

In “Bushido,” Goliath and pals arrive in the secluded Japanese town of Ishimura, where humans and gargoyles live quietly together. Things only get more familiar when the treacherous gargoyle Yama and sleazy businessman Taro stage an attack and relocate the sleeping gargoyles to a new theme park, which recreates places from around the world where gargoyles have resided (including Castle Wyvern, which is subtle).

However, history stops short of repeating itself when Yama realizes Taro intends to expose their existence to the world (instead of having them pose as Disneyland-style cast members as promised), and so he redeems himself by fighting back, allowing his brethren to escape back home. Overall this was another excellent episode, which felt like a reflection on historic recurrence, change, modernity, and tradition, as well as a far more compelling proposal for another spin-off: would I watch a prequel depicting gargoyles fighting alongside samurai in Feudal Japan? Of course!

“Cloud Fathers” sees the return of Elisa’s father Peter and sister Beth, who are investigating a disturbance at a Xanatos construction site in Arizona. Turns out Xanatos’s project has desecrated ancient geoglyphs of the legendary Coyote, arousing his anger, but the billionaire sees an opportunity here to capture the trickster and blackmail him into fulfiling his dream of immortality. I was surprised to see Xanatos himself calling the shots here, and not his robotic double (the other Coyote, who’s also here after being rebuilt, once again with the battle damaged head to avoid confusing the kiddies).

It feels strange to see Xanatos twirling his mustache so much here, capturing Goliath and Angela and pinning them down beneath a vat of acid to lure Coyote, given how they teamed up to stop Demona, and especially after the gargoyles prevented his wife and unborn child from becoming liquid metal fodder – it feels regressive, a case of episodes needing to be aired out-of-order if need be diluting the flow of Goliath and Xanatos’s arc. (Oh well.)

Now you need to take what I say with a grain of salt, because I’m British, not a Native American or Canadian, but I think “Cloud Fathers” is a strong, respectful depiction of an indigenous person, namely Elisa’s father, who is revealed in flashback to be a Puebloan who walked out on his hometown, culture, and his father as a young man. (It’s not specified which nation he belongs to, but the depiction of kachina dancers indicates he’s Hopi or Zuni.) Might sound strange to call it respectful then, and it is odd they use the Siouan word wasi’chu, but anything’s better than the Pacific Northwest character in “Heritage” getting shoved into a Plains Indian costume.

What makes this a strong piece of representation, I feel, is that is a fundamentally good story about a father realizing he may regret becoming disconnected from his culture, his (ahem) heritage, and his father, and being unable to share these with his daughters until now. The episode ends on a surprisingly poignant and moving note when, after much prodding from his girls, Peter finally decides to visit his father – and a shot of a grave reveals he passed away during the intervening years. It left me reflective of how, as a child of immigrants, I often felt embarrassed or resented my family’s culture and language, due to a misguided desire to fit into the wider white culture. Listen to your parents or grandparents’ stories while you still have the chance, y’know? 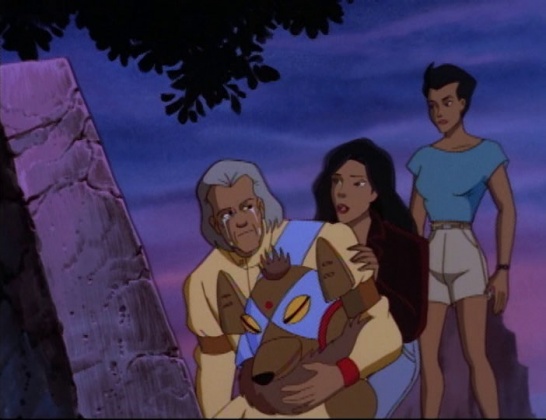 Bonus thoughts:
– After Goliath recounters their adventures to the amnesiac Elisa, she expresses surprise he didn’t throw in the Holy Grail, which he explains they haven’t encountered – “yet.”
– I liked how Nokkar’s drones had a liquid texture to its tendrils instead of plasma.
– Nokkar’s voice has a high helium version playing underneath Avery Brooks’s playback, which is unintentionally funny.
– Beth Maza attends the University of Flagstaff, which isn’t real, though the city is the home of the Northern Arizona University.
– Wow, Angela’s never seen a photo until “Cloud Fathers” – really shows you how much we take camera phones for granted these days.
– Xanatos explains his new Coyote is able to contain the real one because he made it from recycling the Cauldron of Life, which is a cool continuity note, but one that feels awkward and clunky when spoken in dialogue.

Next week: Oberon is finally here!