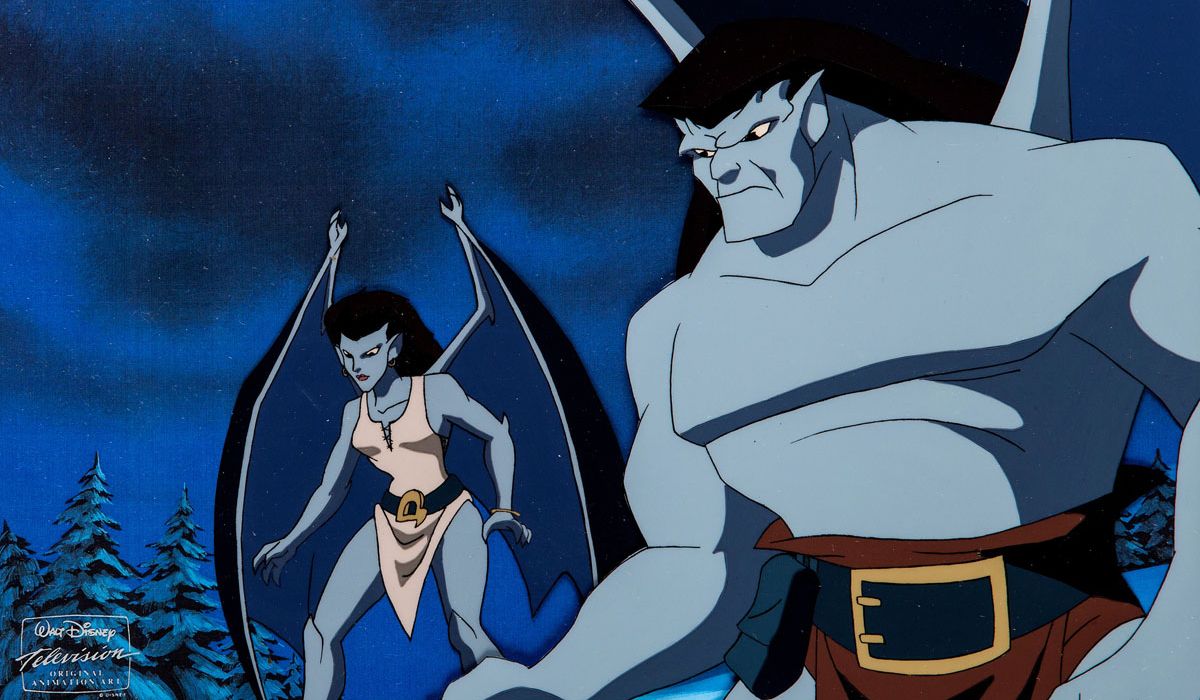 On this week’s installment of the Gargoyles Summer TV Binge, we finally follow up with King Arthur as he meets the rest of the Manhattan Clan in “Pendragon” (which aired February 12, 1996), and then resume the Avalon World Tour in “Eye of the Storm” (February 13, 1996), where Goliath and co. arrive in Norway, and (naturally) get into a fight with Odin. (ODIN!)

“Pendragon” begins with Arthur arriving in London, searching for Merlin, his Knights, and Excalibur. He enters Westminster Abbey, where both the Stone of Destiny and London Clan member Griff are waiting for him. The stone, which is played by Frank Welker (using his Cave of Wonders voice), teleports Arthur and Griff to Manhattan, where the sword has relocated, leading to a team-up between the two Brits with Goliath’s brethren. Naturally, it’s great to see Hudson and the boys so soon again, and it’s so cool that these separately introduced elements are coming together – the Avalon World Tour is truly paying off. 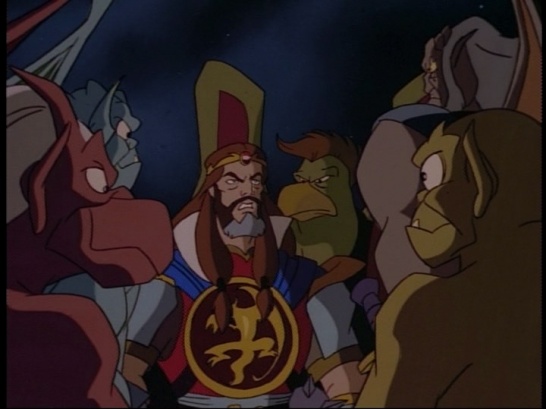 MacBeth also wants Excalibur: that’s right, King of Scotland vs. King of the Britons – how cool is that? It’s like the show’s writers were just daydreaming about unlikely historical battles, when they realized, wait, they could do that! And like every inevitable fight, there’s always a third party who forces the two to work together: in this case, it’s a stone dragon that’s carrying Excalibur in a jewel on its breast, which grabs both kings and takes them for a ride. I’ve said before gargoyles are basically humanoid dragons, so it was a pleasant surprise to see the show did flip the script by using a dragon as an antagonist at least once – should’ve really seen it coming though, given Arthur’s surname is Pendragon. 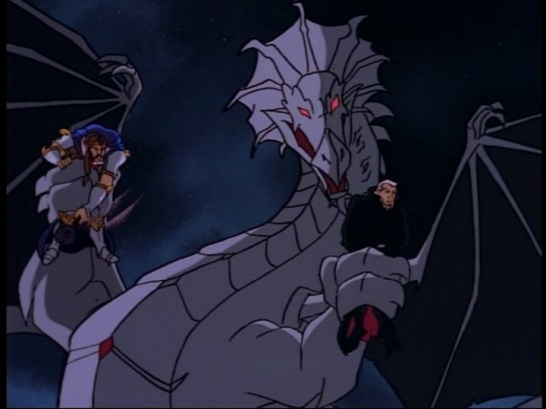 3. Humble is the Head That Wears the Crown

Arthur’s characterization fascinates me, because he’s somewhat unlikable: John St. Ryan’s voice acting comes across as a bit presumptuous, as does the character’s whole quest to reclaim Excalibur and carry on where he left off, as if centuries haven’t passed and the world hasn’t changed – there’s an amusing moment where Arthur reunites with the Lady of the Lake in Central Park, and reacts rather dismissively to the notion of her wanting to go sightseeing while he was in Avalon. That said, Arthur is a good guy, who’s willing to put his life on the line, or to concede when MacBeth briefly beats him in combat, proving he’s the Once and Future King not by tone but through action.

In the end, Arthur regains his sword, and is still searching for Merlin, but has also gained a new companion in Griff, whom he explicitly knights – one hopes he’ll bestow the same honor on Goliath’s clan too. MacBeth has also accepted Arthur as his king, which, coupled with his last appearance, indicates he’s finally moving on from his past, and maybe even ready to become an ally: after all, someone’s going to need to pay for Arthur’s cab fare in this brave new world.

4. The Road to Hel is Paved With Good Intentions

“Eye of the Storm” picks up on the story of the Eye of Odin, the necklace first introduced in “The Edge,” which transformed Fox into a monster and enhanced the Archmage’s powers. Turns out it literally is Odin’s missing eye, as Goliath, Elisa, Angela and Bronx discover when they disembark in Norway, where Elisa’s formidable trademark jacket and jeans are no match for the freezing weather: the wandering god (voiced by the late, great W. Morgan Sheppard) shows up, offering his cloak in exchange for the eye, but Goliath refuses, well aware of its corruptive powers. 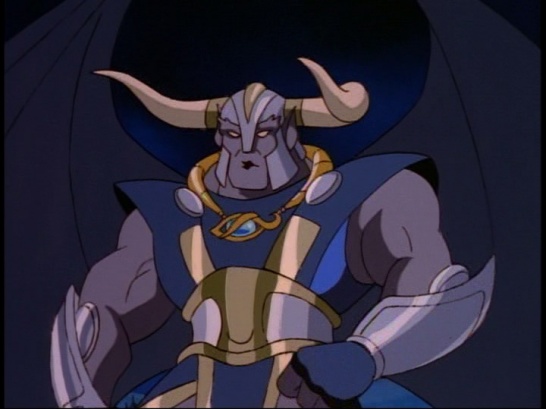 The horns are a subtle touch.

While Goliath is able to get Elisa shelter with a local and his son, Odin just won’t relent in attempting to get his eye back, so our clan leader is forced to don the Eye, transforming him into an awesomely oversized, heavily armored version to get him to back off. But the Eye warps his personality too: he creates a thunderstorm to force everyone into a cave for shelter, and then tries to brawl Odin to death. While it is a little bog-standard that Goliath snaps out of his toxic state when he puts Angela in danger, it is great she lets herself be endangered out of faith his fatherly instincts will kick in – this is, overall, together with “Mark of the Panther,” a thoughtful episode on how love can turn possessive, and an important demonstration of how power corrupts.

OK, so let’s dive into Odin’s portrayal, because he is the coolest pagan god (sorry Anubis). Sheppard was fantastic as the Norse legend, as was the character’s written depiction, which was utterly spot on: his refusal to tell anyone who he is, and attempts to get his Eye back through subterfuge, deception and sheer ruthlessness is absolutely in-character, as is the wisdom he provides Goliath as he reflects on the corrupting influences he suffered on this adventure. 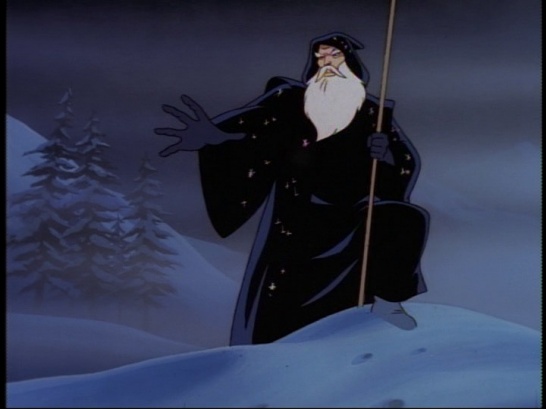 'You shall not pass? Are you thinking of Heimdall?'

Design wise, Odin’s Wanderer form doesn’t much evoke the Gandalf-like figure of tradition, but I dig the character’s black cloak with its starlight pattern, which feels like a subtle nod to the Sorcerer from Fantasia. When he tries to get back the Eye via force, Odin turns into a one-eyed polar bear, which is a very unique idea: a less creative writer might’ve had him turn into a wolf or a murder of crows as a nod to his mythological pets, but Odin would surely be embodied by the mightiest animal in Midgard (it also evokes stories of the Viking berserkers, whose name means “bear coats”). 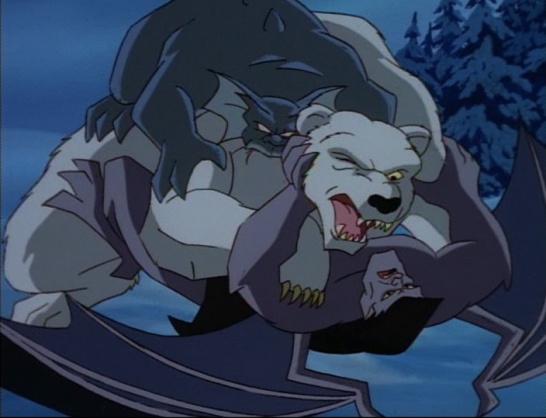 When Odin steps forth to battle the augmented Goliath in his true form, it’s a similarly awesome, armored sight to behold. Strangely, he does not possess his mighty spear Gungnir, but he does have lightning powers, which is a great nod to his son Thor. Similarly, Odin’s horse Sleipnir lacks his legendary eight legs, but that’s understandable, as it would’ve been a nightmare to animate.

My main question is this: in Norse mythology, Odin sacrificed his Eye to gain wisdom – in trying to get it back, is he forsaking his knowledge? I suppose if the four-legged Sleipnir wasn’t a clue, there’s probably a world of difference between the Odin of myth and the Odin of Gargoyles. At least we get one more nod to the old sagas before the show moves on: Odin is seen riding his horse on the Rainbow Bridge, explaining how this version of Sleipnir can fly. 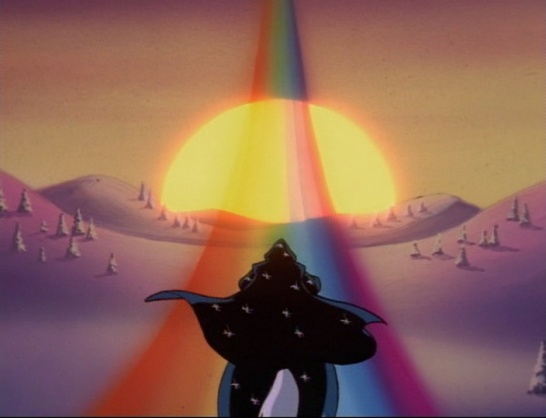 Bonus thoughts:
– Better late than never for this realization: does Demona and MacBeth’s backstory remind anyone else of Highlander? They’re immortal unless one kills the other, just like the ones in the movie.
– Funnily enough, the elemental the Lady of the Lake summons to test Arthur resembles Hydro-Man (guest-starring in Spider-Man: Far From Home, out today!)
– In a neat bit of symmetry, “Eye of the Storm” has Angela seeing snow for the first time, and Goliath marvelling at the Sun after the Eye of Odin enables him to walk during the day.
– So really, would a gargoyle be stronger than a polar bear?

Join us next week as the Avalon World Tour continues, as it switches tracks to Greek mythology in “The New Olympians.”