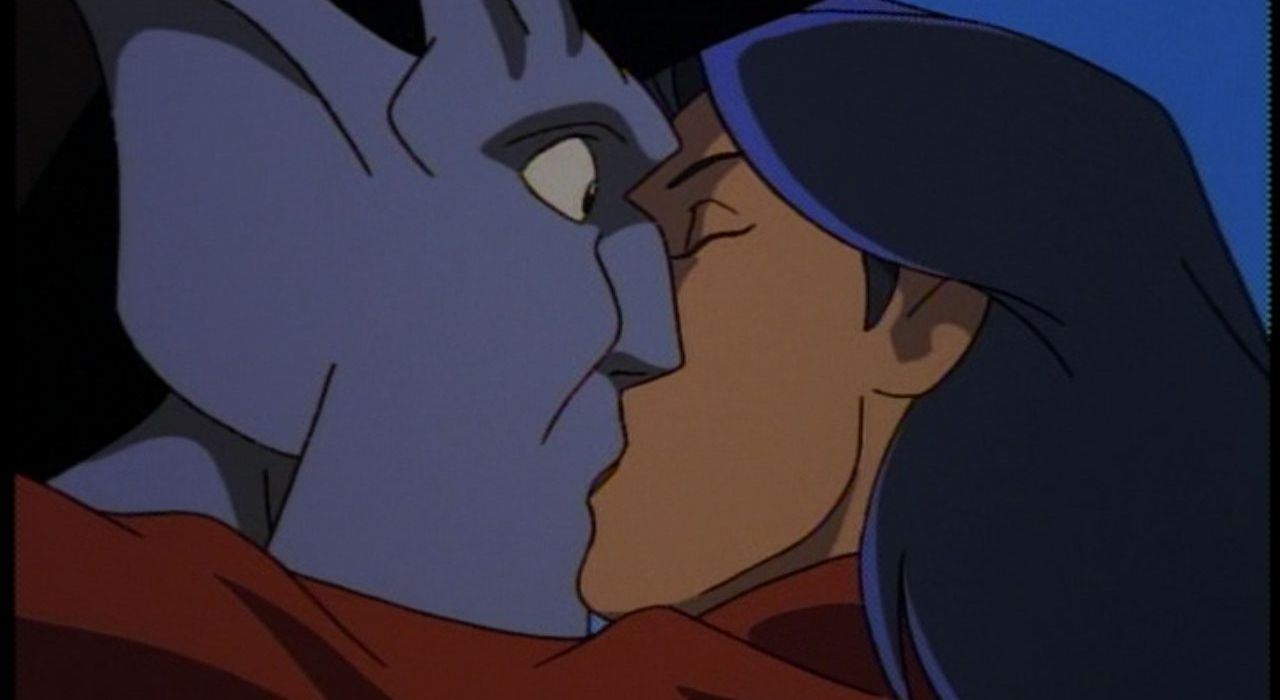 It’s been a long time coming, but our Summer TV Binge of Disney’s Gargoyles has finally reached season 2’s three-part finale, “Hunter’s Moon.” These three episodes, which aired the week of May 13, 1996, see Demona unleash her most diabolical scheme against humanity yet, and introduces a new generation of Hunters, whose vendetta against her and all gargoylekind draws in and threatens to inexorably warp Goliath as well.

1. So Much for Redemption

Demona’s appearances across season 2 have done much to make her a sympathetic, broken villain whose nature has been the result of constant manipulation and betrayal, not least by her own paranoia. However, it hasn’t changed the fact that she really, really, hates humans, and so she unveils her most terrible scheme yet, to kill off the human race with a virus, using two magical objects she’s gathered over the centuries to activate it worldwide instantly, while ensuring no gargoyles are infected. I wish we’d received more foreshadowing about this plot before we got the rug pulled from under us, but it is amusing to imagine Demona fumbling through the magical relics she’s collected over the centuries, and coming up with a new deranged plan on the spot.

So the Hunter was a mantle established in “City of Stone” as being one handed down from MacBeth’s rival Gille Coemgáin to his descendants, which made it weird MacBeth was the Hunter in the present. We’re introduced to the three Canmore siblings, Jason, Jon and Robyn, and more of their ancestors during flashbacks to Demona’s relic hunting in Florence, 1495, and Paris, 1980, which clears that up a bit, implying MacBeth joined them to settle his own score. It’s still strange MacBeth isn’t even mentioned in this episode: his last appearance heavily implied he was going to use his resources to help Arthur (officially another no-show for the rest of the season), but again, that’s me sussing it out, it would’ve been cool to have the younger Hunters mention MacBeth’s disappearance. 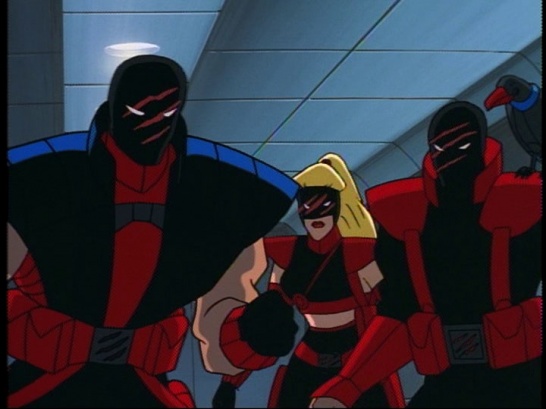 'Who cares? Get the gargs!'

3. More Than Meets the Eye

The Hunter siblings are the most ’90s, sub-Liefeldian looking characters on the show yet, but they are much more than another Pack, they’re far more complex figures, who are having an internal argument about whether they should continue their ancestors’ xenophobic, genocidal campaign against all gargoyles, or if they should just pursue “the Demon” who killed their father. Jon, the youngest Canmore, is the idealist, while Jason, the oldest, is bitter and conservative, but in a display of further depth, their encounters with Goliath cause them to completely shift to the others’ worldview. Moreover, we’re introduced to them posing as civilians, with Jon acting as a reporter, Robyn as a new employee of Demona’s human alter-ego Destine, and Jason as Elisa’s new rookie partner. 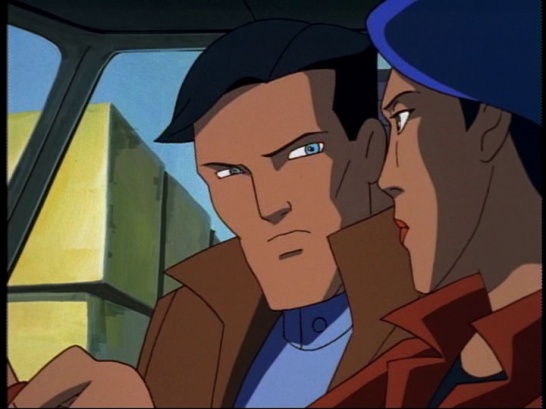 Most tanned Scotsman ever.

4. The Love Between a Human and a Gargoyle

That last storyline is utterly integral to these episodes, with them finally tackling the question of Elisa’s love life. Yes, she and Goliath are as close as a gargoyle and a human could be by this point, but is this really the life she wants? Jason is brave, intelligent, handsome, and caring, he’d be perfect for her if the gargoyles didn’t exist (but then they’d have never met I guess). Seeing them get too close for comfort at her apartment renders Goliath emotionally compromised throughout this story (that and the Hunters’ attacks), leading his temper to get the better of him, even causing him to accidentally boot both him and her off a dam.

Jason saves her life, and realizes he’s as much to blame, but the damage is done, with Jon coming to believe his old worldview. The younger Hunter develops an itchy trigger finger and accidentally shoots Jason when he believes Goliath is about to pounce, severing his spine. After Demona is foiled, Elisa visits Jason in hospital, informing him that as much as she cares for him, there’ll only be room for one (seven feet tall) man in her life. Poor Jason: still, it’s not like he’ll need her to wheel him around.

I wonder if Elisa ultimately chooses Goliath in-part to placate his temper: these episodes really demonstrate his continual failing is to become incredibly murderous when those closest to him are harmed (which is a really relatable flaw), and in that respect he and Demona are really two of a kind – they are prime examples of watchful protectors going overboard. When Goliath and Elisa finally kiss at the season’s close, it’s a brief, respectful one, almost as if she’s given it out of a sense of duty to keep him in line as much as love. 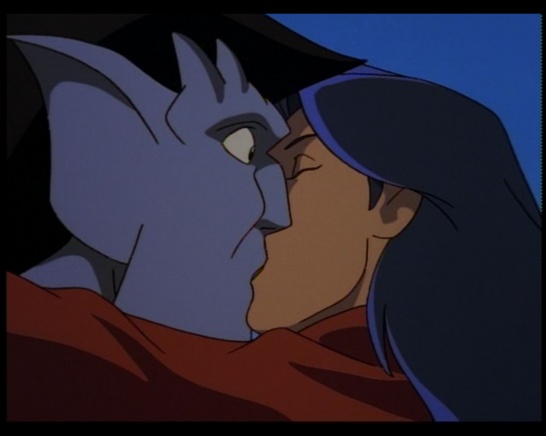 Or it was just snuck in at the last minute to annoy the censors.

These episodes see the Hunters order a missile strike on the Clock Tower, and subsequently exposing the gargoyles to the world to frame them for the attack. Xanatos largely sits on the sidelines in these episodes, his storyline having been mostly concluded in “The Gathering” (arguably the season’s true climax), but he knows a scheme when he sees one, his alarm bells having been set off during his interview with Jon, who was very interested in the statues that used to be at Castle Wyvern, and so he comes to the clan’s rescue when the authorities have them surrounded. Ultimately, things have come full circle to near the start of season 1, with the clan returned to their old home and under Xanatos’s protection from a frightened public: through Avalon and beyond, they’ve come home, the long way round.

(Apologies in advance for the longest listicle ever, but it was the season finale.)

– The Hunter’s Moon, for anyone who needs clarification on when these episodes take place.
– Of course Leonardo da Vinci’s bat-like flying machine was built to catch Demona.
– There are several fun callbacks to the start of the show, with the return of Marina Sirtis’s American civilian Margo, and Brooklyn straight up reciting the original tagline “stopping evil, stone cold.”
– I wonder, how many of Destine’s suits has Demona ruined during her nightly transformations? Her employees must think she’s a freak.
– Yes, what does happen to a gargoyle’s stone sheddings? Do they generally leave them to be carried away by the wind?
– Demona’s arm bracelet being used as an electrical conductor – the longest Chekhov’s gun in television history?
– Elisa using CPR on Angela is a great reminder the clan is still new to this world.
– Bluestone making that callback to Easter Island is amazing – of course Elisa told him about that.
– Jason’s blue eyes give off New Batman Adventures Bruce Wayne vibes, and his late father’s mustache makes him resemble Thomas Wayne.
– It’s tragically funny and relevant how the Hunters’ strike on the Clock Tower still injures others like Chief Detective Maria Chavez on the lower floors.
– Brooklyn’s utter hatred of Demona has become hilarious after “Future Tense” depicted their dystopian counterparts as lovers.
– Really, how do gargoyles recharge during the day inside? Maybe Sevarius was wrong about them using the Sun and it’s just magic.
– Animal-Ya and Walt Disney Animation Japan’s work on these episodes were simply exquisite – I dare you to find a cooler shot of Hudson than this: 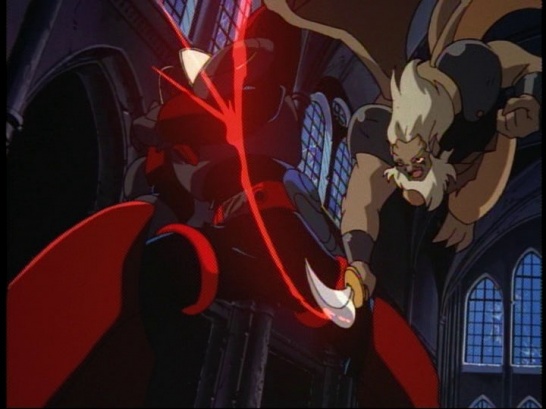 Well, I’m feeling very emotional, since this is the first time I’ve reached the end of season 2 (having never seen it as a child), and so closing chapter two (or is it three?) of the show certainly feels like the end of a book in my life. Rest assured, I’ll be back next week to begin looking at the show’s ill-received third season, Gargoyles: The Goliath Chronicles: let’s hope I don’t regret it.