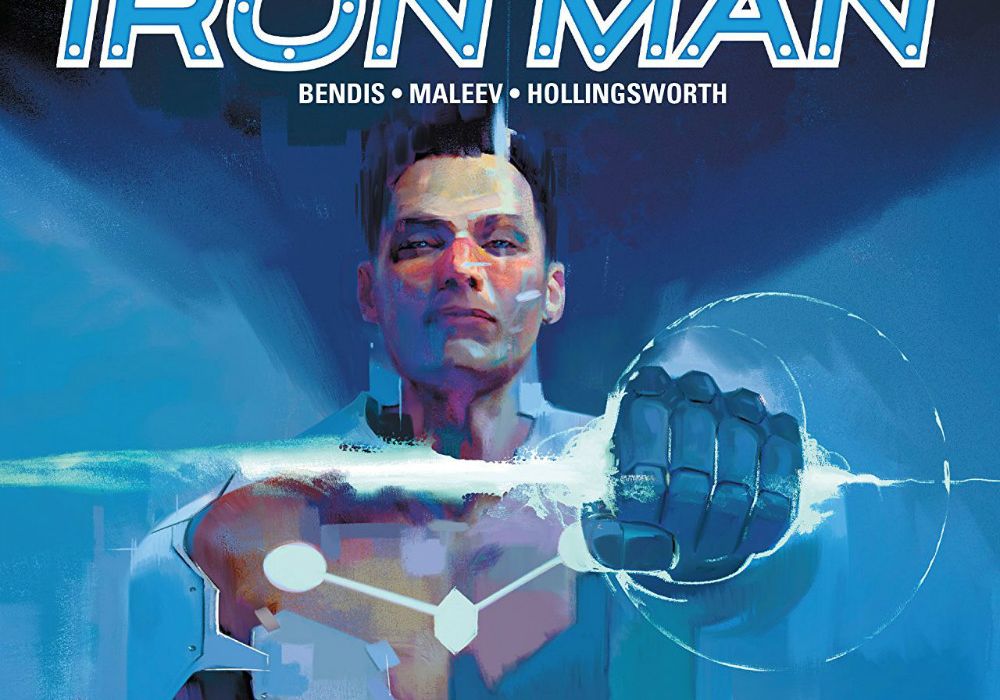 Dr. Doom as Iron Man… the idea seemed ridiculous at first. Why would Doom, of all people, try to be a legacy character to someone else? Doom forges his own legacy! He does not need to take another’s name, for he is Doom. But Bendis said he could make it work, and comic readers responded with: “Eh… okay, I guess, let’s see what you can do.” 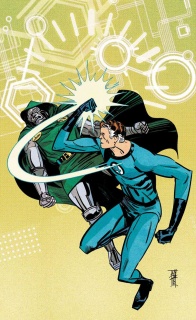 The Reed Richards from a dead reality calls himself “The Maker” – and his plans for the world are far more insane than anything Doctor Doom ever attempted. Now Doom, as Iron Man, is the only one who can stop him. Doom is the hero? Richards is the villain? It is a world gone mad!

Doom versus Mr. Fantastic, but now Dr. Doom is the hero! Sounds awesome, right? The Infamous Iron Man vs The Maker! Unfortunately, we get none of that this issue, in spite of what the solicit suggests.

What we do get, at least, is a decent look at how the world of villains has reacted to Dr. Doom’s heel-face turn. After all, Doom was among the greatest of villains (ignoring his cinematic incarnations), and the other bad guys know it. There’s a great sense of panic among the assembled villains, made better by the clustered panels filled with dialogue.

When Doom himself arrives, it’s a beautiful moment with next to no dialogue (save for censored curses) as the action carries the scene. Alex Maleev’s artwork captures a great angle of the Infamous Iron Man, as we gaze up on Dr. Doom from a field of bruised and battered baddies. (There is one odd spot where one of them looks straight ahead at the reader, but it’s a small distraction in the long run.) The scene is made even better by the color work from Matt Hollingsworth. The purple glow filling the scene contrasts well with the green glow around Doom’s armor, and the colors clash nicely when the Hood tries to take Infamous Iron Man on.

Overall, it’s a great scene in its buildup and payoff. The frantic dialogue, the silent action, and the sheer scale of the takedown are all well done.

Unfortunately, this issue of “Infamous Iron Man” does have its weaknesses, and it comes in the form of Bendis’s dialogue. Now, Brian Michael Bendis has done some great things for Marvel comics, I wouldn’t dare deny that. Yet he has a very distinctive way of writing dialogue that so often doesn’t work. Lots of repetition, short statements spaced out with little interjections so that they take up far more space than they should, and a pacing that makes it read more like an episode of “Gilmore Girls” than a superhero comic.

That might work when people are talking in real life, but it just doesn’t translate well to comics. There are some times when it even reads well – it was acceptable in the aforementioned scene with the villains panicking, because everything is so frantic it would be hard to get a full thought out. Yet in scenes like the one I transcribed, it gives us no new information, it doesn’t flow well, and it’s a pain to read.

Much respect to Bendis for what he can do with a story and characters. Just not that dialogue.

Fortunately, “Infamous Iron Man” can still tell a story with minimal dialogue when it wants to, as we see more of Doom’s takedown. It’s swift, it’s brutal, and it’s awesome. At last we get to see Doctor Doom being the badass we know he can be, lovingly/horrifically illustrated by Alex Maleev.

Outside of that scene, the art and color work sets a somber mood back in Manhattan. The shadows and use of darkness are akin to a classic noir film, and there’s a great image where the glowing red panels on the Infamous Iron Man suit illuminate the room. Alex Maleev and Matt Hollingsworth make great use of the lighting effects, and it really helps create and enhance the tone.

The latter half of the issue is spent with Ben and Doom talking. For all my complaints about how Bendis writes dialogue, there are some good character moments in there; while Doom’s hatred was typically targeted at Reed Richards, he’s caused no small amount of trouble for Ben Grimm in the past, so it’s interesting to see them talk honestly and directly. It adds a bit of heart to the issue, and helps provide a little more insight into Doom’s change of heart.

Plus, given that Victor Von Doom is the type who likes to talk at length, it doesn’t fall into Bendis’s usual style of dialogue nearly as often.

It’s still hard for me to accept Victor Von Doom as anything but Doctor Doom. He can call himself an Iron Man, the comic can be called “Infamous Iron Man,” but it’s still Doctor Doom in a different suit of armor. Even his turn to good would be easier to digest if he was being his own man, rather than Iron Man. Overall, though, we still get some good moments in action and character from this issue, so I can’t hate it, and have to give credit where credit is due.

Final Verdict: 6.8 – The artwork is lovely, and the comic does provide some good character moments and helps advance the plot. Yet the dialogue leaves much to be desired.