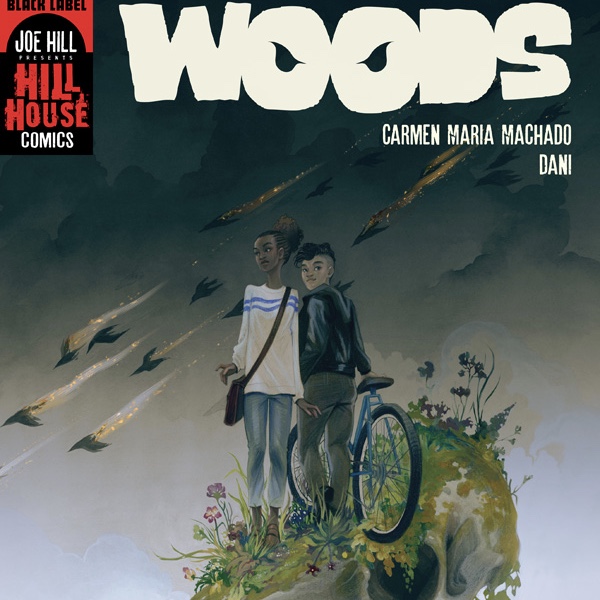 Writer Carmen Maria Machado was a finalist for the National Book Award with her short story collection “Her Body and Other Parties.” In her debut comic, “The Low, Low Woods” #1, she collaborates with a great team of proven comic creators to showcase a bold take on the horror genre. (Warning: may contain minor spoilers.) 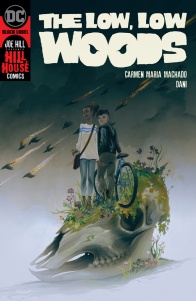 Shudder-To-Think, PA, has been on fire for years. The coal mines beneath it are long since abandoned. The woods are full of rabbits with human eyes, a deer woman who stalks hungry girls, and swaths of skinless men. And the people in Shudder-to-Think? Well, they’re not doing so well either. When El and Octavia wake up in a movie theater with no memory of the last few hours of their lives, the two teenage dirtbags begin a surreal and terrifying journey to discover the truth about the strange town that they call home.

Conventional wisdom notes that the most powerful, bone-chilling horror stories function as an allegory for shared anxiety. Want to know what a generation, country or culture fears most? Take a look at its horror stories. Even a modicum of critical insight reveals the unspeakable nightmares that provoke feelings of panic and dread.

Faced with a 24/7 onslaught of Breaking News, however, there’s enough devastation, suffering, ruin, and wreckage to scare the hell out of anyone. No metaphor required!

What, then, is the role of the horror genre when it increasingly feels like malevolent forces no longer bother to hide or even disguise themselves?

Enter writer Joe Hill, visionary and curator of DC’s pop-up horror imprint, Hill House Comics. For Hill, it’s exceedingly simple. We are living in The Golden Age of Terror and it’s time to unleash the freshest, most exciting talent to showcase what’s possible in the realm of comics. It’s a lofty pledge, no doubt, but I can assure you: look no further than “The Low, Low Woods” #1, a deliciously unnerving debut from first time comics creator Carmen Maria Machado and without question, you will see Hill’s noble promise sublimely fulfilled.

The story centers on two high school best friends, Eldora and Octavia – aka El and Vee – who wake up completely confused in a small town movie theater with no clear idea of how long they’ve been there. After this opening scene, which unmistakably and brilliantly sets the weird, creepy tone, El steps to the fore, becoming the narrative voice and central protagonist. It’s a wise artistic choice. El not only gives us an intensely personal window into the story, she’s incredibly likable, well-rounded and compelling. She’s also a great intermediary through whom Machado can riff on Pennsylvania Gothic, curtesy of El’s highly evocative, poetic monologues.

Inspired by Machado’s real life visits to Centralia, PA where a subterranean fire has been burning in one of the coal mines since 1962, El self-effacingly muses about her fictional home town. “Years ago, something happened…. One day it was just your regular piece-of-shit coal mining town where people died the way God and the company intended: hacking up pieces of lung or crushed beneath ten tons of rock…. Then one day, a fire started. But not the regular kind. Underground..” It’s a harrowing, heartfelt description and it only gets more intense and visceral from there. I’d quote it further, but you need to read it. Once Machado’s imagery burrows into your mind, it’s not easily dislodged.

Visually, illustrator Dani employs an energetic, barely restrained, spontaneous aesthetic that seemingly captures the scenes just as they’re unfolding. He line work is loose and fluid, emotional and captivating. Notably, the use of solid black is generally pretty restrained, an unusual choice for a horror book in the first place, much less one released by a major publisher. Instead, Dani uses exceptional crosshatching and wonderful angled lines that radiate like rays, creating textured shadows that give the her subjects and scenes great depth. With similar simplicity and economy, Dani also renders dazzling facial expressions that immediately command your attention.

Not to be outdone, colorist Tamra Bonvillain once again proves why she’s one of the best in the business. With perhaps a bit more constraint than her usual work, Bonvillain delivers a pitch perfect balance of warm and cool colors that beautifully tie everything together. Whether riding home on their bikes in the eerie purple glow of a woodland twilight or scene in the harsh yellow glare of a frightening flashback, Bonvillain’s lush palettes underscore and augment the characters’ emotions without ever overpowering Machado and Dani’s carefully crafted moments of pure authenticity. Of particular note, is Bonvillain’s wondrous use of light and shadow in the book’s more dramatic scenes, especially the way she uses the concentric, circular glow and frantic, arcing slash of the bicycle’s headlight to signify each scene’s intensity.

All told, “The Low, Low Woods” #1 is an intensely creepy, exceptionally well constructed, thoroughly gripping debut that could easily go in numerous directions from here. Wherever it ultimately takes us, it will surely be a harrowing, but intensely satisfying ride.

Final Verdict: 9.3 With an often poetic script and incredible visual aesthetic, the visceral creepiness of “The Low, Low Woods” #1 will linger long after you’ve closed the book’s cover.