Intended for a middle grade readers, “Marvel Action Black Panther” #1 delivers a streamlined, action-packed debut that will engage its target audience right from the start, even as it poses bigger questions and hints at larger themes to come. 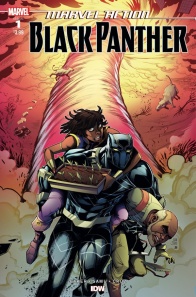 Readers of all ages can get lost in the technologically advanced African nation of Wakanda as they follow the adventures of its monarch, the Black Panther! King T’Challa is responsible for defending his people—and the world—from any threats. And he gets plenty of help—and sass—from his genius sister Shuri. A Marvelous new era begins here! From the mind of multiple Eisner and Harvey award winner Kyle Baker!

With Scholastic’s imprint Graphix consistently selling hundreds of thousands of units to ravenous young readers for the past many years, it’s no surprise that more traditional comics and graphic novel publishers are looking for a bigger slice of the all-ages pie.

DC Comics, for one, is clearly committed to the concept, launching the Brian Michael Bendis curated imprint Wonder Comics earlier this year, as well as two lines of graphic novels: DC Zoom, for readers ages 8 – 12, and DC Ink, for readers ages 13+.

For its part, Marvel jumped into the fray back in 2017 with the launch of “Marvel Super Hero Adventures,” a multiplatform line designed to introduce the Marvel Universe to preschool and grade school readers. In late 2018, in order to leave no stone unturned and no market segment untargeted, Marvel partnered with IDW Publishing to launch “Marvel Action,” an all-ages line of books meant for pre-teen readers ready for meatier stories that they can explore on their own. Enter the latest series, “Marvel Action Black Panther,” riding the crest of the Wakanda wave.

Written by the multitalented Kyle Baker (he also did the A cover), who is probably best known for his Eisner Award winning run on “Plastic Man” from 2004 – 2006, the tightly written script keeps driving the story forward even as it makes room for moments of comic relief and thematic exploration.

As the story opens, an otherwise idyllic scene of children at play is suddenly interrupted by stampeding wild animals, ominously preceded by the persistent, hacking coughs of a pair of adults. Something is in the air, and that something isn’t good. T’Challa senses it, too, as he prepares to address his people, feeling uncomfortably smothered by his royal outfil in the stifling heat. Not one to let her brother’s underlying discomfort get in the way of making a joke at his expense, Shuri kids T’Challa that he may be more at ease in a totally different outfit. One by one she works her way through possible iterations, snarkily describing the merits of Purple, Silver and Sequined Panther while her mother chides her to stop. Moments later, however, this good natured sibling rivalry is undercut by a true emergency. From there, it’s a literal whirlwind until the final cliffhanger.

Visually, the art feels pretty grown up, unlike a lot of all-ages titles which tend to be a bit cartoony or look like their animated series cousins designed for much younger kids. Instead, illustrator Juan Samu’s character designs and simple, uncluttered inks are very much in line with the flagship “Black Panther” books – a welcome creative choice. The paneling, as well, feels more sophisticated than typical all-ages work. With lots of angular lines and images that subtly overlap panel borders, there’s a palpable sense of motion, energy and excitement. Occasional motion lines and curved panel borders underscore this feeling of nearly breathless, wall-to-wall action. And yet, without even reading the words, the story is clear and concise. Samu directs your eye exactly where it needs to be, guiding you intuitively across the page.

Similarly, David Garcia Cruz’s colors feel like a grownup palette. Rather than simple primary colors, Cruz digs a little bit deeper, into golden yellows, royal purples and magentas, and cool aquas and turquoise blues. There’s also a wonderfully restrained use of red, which immediately grabs your attention, and sparing use of white space, allowing certain panels to breathe.

Overall, as should be expected in a title for pre-teen readers, the plot is pretty basic and easy to understand. That said, there are also intriguing themes of global climate change, resource extraction and humanity’s impact on the environment. Right near the end of this debut issue, the villains are emerging, but it isn’t that clear cut. Over the last year, Vibranium production has tripled. Everyone has prospered. As in real life, however, everyone also bears the burden.