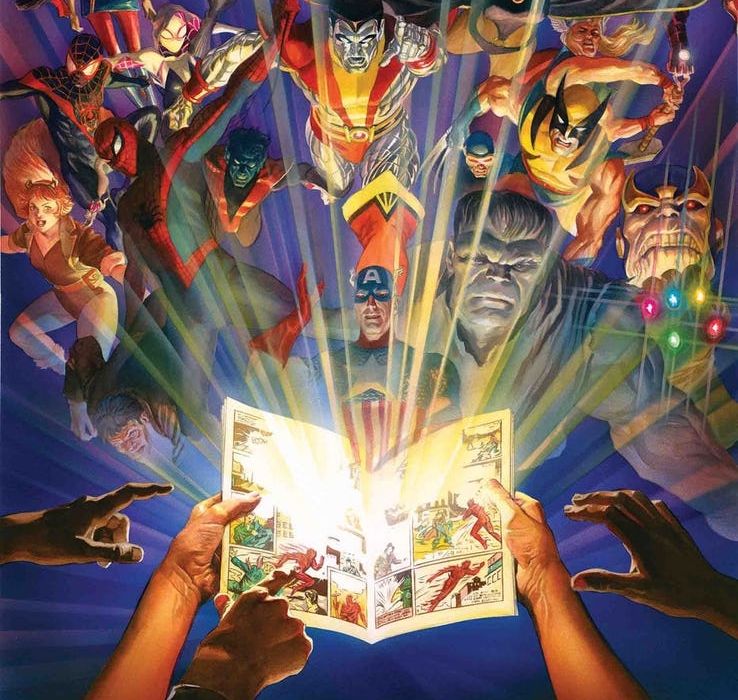 80 years. That’s a lot of time for anything, but for Marvel Comics to continue entertaining for so long is a a testament to its quality, its stories, and the appeal of its characters. There’s quite a heft history behind the comics, and “Marvel Comics #1000” is designed to be both a tribute to said history and a turning point for the franchise, with basically every single writer and artist they’ve got contributing. Does it live up to those lofty aspirations, or are there too many cooks in this comic? 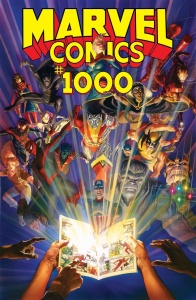 THE GREATEST TALENT EVER ASSEMBLED FOR ONE STORY!

THIS IS THE BIG ONE! In celebration of Marvel’s 80th Anniversary, we have gathered together the greatest array of talent ever to be assembled between the covers of a single comic book! Names from the past, from the present, and even the future! Every page is filled with all-new work from this cavalcade of comic book luminaries!

There is a mystery that threads throughout the Marvel Universe – one that has its origins in MARVEL COMICS #1 and which unites a disparate array of heroes and villains throughout the decades! What is the Eternity Mask, and who is responsible for the conspiracy to keep it hidden? And what new player will make their startling debut as these secrets are peeled away?

Featuring the entirety of the Marvel Universe of characters!

80 years of Marvel history AND a new addition to the comic’s mythos? That’s a lot to encompass in one issue. So Marvel brought in everyone, and I mean everyone. Al Ewing, Gail Simone, Ryan North, Kieron Gillen, Chris Claremont, even Neil Gaiman himself contribute stories, and that’s just off the top of my head. The artists run an equally massive gamut, including Paco Medina, Ed McGuinness, Chris Weston, Michael Allred – to name them all would take most of this article space.

The entire issue is a compilation of one-page stories from every single creator who’s been a part of Marvel’s history. As such, to credit any single artist or writer would do a disservice to the others, while analyzing them all would take more time than anyone has to read a review. We will, of course, highlight some of the standout aspects of the comic.

So the big question is: does it work?

The short answer: Yes. It manages to blend together character highlights and a story developed over Marvel’s long history into a cohesive comic while paying tribute to events from each year in Marvel.

While each page of the comic is its own self-contained story, there’s a clear order and form to everything. Every page relates to events in a specific year in Marvel history, from the debut of comics like “Journey into Mystery,” the introduction of characters like Groot in his 1960 “Tales to Astonish” debut, or trivia and revelations like Stan Lee’s character in the Marvel cinematic universe being the Watcher (at least in Guardians of the Galaxy 2). These notes enhance the comic and make it a true tribute to Marvel’s long history, while providing contextual information for why each story appears where it is.

Each story can be more or less put into one of two categories: character spotlights providing looks at specific teams or characters that delve into what makes them tick, and story beats following a group called The Enclave and the history of a powerful item called the Eternity Mask. However, that’s more of a Venn diagram than distinct categories, as the last pages show how many of the character spotlights tie in to the overall story that “Marvel Comics #1000” is building up to.

As such, it does a good job weaving together a story that stretches through the history of Marvel, from the creation of the first Human Torch to the present day. Each piece of history is presented at a good pace, spaced out between character spotlights and shown through different character perspectives to slowly build up to it.

As for the Eternity Mask itself, we’re shown bits and pieces of it at play as it passes through hands throughout history. This builds up its story and place in the Marvel universe well, as well as showing us the Enclave and its evolution over time. While the comic sets up the mask’s importance well, the payoff is a new hero and new mystery, so we have yet to see where its story goes beyond this introduction.

Regarding the character spotlights, each one has an important task: highlight something valuable about these characters or groups in one page. Most of them pull it off spectacularly, and those that aren’t meaningful are at least entertaining.

There are several Spider-Man stories that truly get to the core of his character or show the impact he’s had on the world, perhaps more than for any other character. Considering Spider-Man’s status as a character readers around the world can relate to, and his well-defined personality and morality, this makes perfect sense. In a particularly poignant scene, for instance, we see how many children are named “Ben” by people whose lives he’s saved. It shows us the impact he’s had on all the lives he’s saved while illustrating how his memory of Uncle Ben continues to drive him each day.

Another noteworthy character moment comes from Kieron Gillen’s contribution, which can be viewed as a follow-up to his time writing “Journey Into Mystery.” In this page, a circle of Lokis, each one representing a different form the trickster god has taken, whisper to each other “You can escape.” In the end, we see they’re all stuck together in the same circle, the same cycle. It’s an important look at the character delivered in a subtle but meaningful manner.

Similarly, many of these manage to tell powerful stories without using any words. A prime example of this comes in an Iron Man story by Chip Zdarsky. This story simply shows Iron Man, starting with his largest suit and stripping the armor away, with a different design of the suit underneath each time, before it reveals Tony himself. Then Tony is disassembled like his armor, until nothing remains. The symbolism is clear, and the artwork alone effectively tells the story.

Other stories are less important to the characters or plot, but entertaining nonetheless. Dr. Strange’s laundry day is made all the more amusing as he tries to get his cloak of levitation in the wash, accentuated by Michael Allred’s distinct artwork and Laura Martin’s brilliantly bright colors. There’s also Gail Simone’s return to writing Deadpool, or rather, “Turkey Soup for the Deadpool Soul.” Her grasp of Deadpool’s voice and personality is spot on as always, filled with plenty of humor, like a reference to Marvel’s “swimsuit issues.”

Given the wide range of artists, the styles can shift significantly between pages, but each artist is well-suited for the story they tell. Alex Ross, for instance, gives us six panels of a superbly detailed Hulk. The fantastic lighting and shading brings the angry green giant to life in the pages in a way that only Alex Ross can.

When the story is more comedic, we get cartoonish artwork to match. Oscar Martin adds a lot of energy to Rocket and Groot’s interview, with soft shapes and slightly exaggerated features that emphasize the lighthearted and humorous tone of the page.

Sometimes we get a darker, almost noir style with the artwork, like Leinil Francis Yu on a Punisher story. The use of darkness is highlighted by the explosive last panels, while the few elements using lighter colors (like the skull on Punisher’s shirt) are shown clearly within. The rough, gritty designs work very well for the character and page, so Leinil is a perfect choice for it.

One plus to the comic having a different writer and artist per page is that it gives every one of them a chance to bring their A-game, which they all most certainly do. There wasn’t a single page where the story was a mess or the artwork felt lazy – there’s a clear and significant passion put into every moment within the stories.

These are creators who have made their mark on Marvel history. Artists, colorists, writers, and even letterers whose hard work has helped continue the Marvel legacy. “Marvel Comics #1000” is clearly a work of love for everyone involved, no matter which story they contributed, and they should all be proud of what they’ve created.

The blend of character focus and story building create an interwoven tapestry that plays tribute to the Marvel universe. Accentuated by amazing artists and great synergy between every part of the creative teams, “Marvel Comics #1000” is an issue that any Marvel fan can and will enjoy.

Final Verdict: 9.6 – “Marvel Comics #1000” puts the passion of every creator and contributor on full display, with short stories that get to the core of what we love about the characters and artwork perfectly suited to each moment. The history is encompassed in an ongoing story that weaves itself throughout the narratives, heralding a new stage in Marvel Comics.