What do you know about the H Dial? What dark secrets are hidden beneath its red shell? How many hits does it take until you cannot live without its ring, without the feel of its gears clicking beneath your finger? And who will you become, once that final transformation is sealed? Minor spoilers ahead. 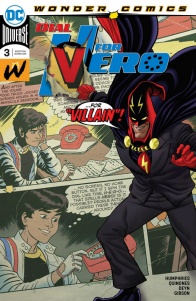 Teen daredevil Miguel and runaway Summer travel to the home of the Flash in Central City to steal back the H-Dial as a secret former wielder of the powerful device swears to do anything to become a hero again—including handing the dial to Mr. Thunderbolt, the villainous entity working to steal the Dial. But it’s hard to work together when you can’t trust your partners…so it’s time for the mysterious Summer to reveal her past to Miguel!

The previous incarnation of “Dial H for Hero” was an underrated gem of the New 52, with a concept that was inherently wacky but, when played completely earnest, generated real heart and introspection about the nature of heroism, one’s self-image, and the way we use shifting identities to navigate the world. With the relaunch of the tile under the Wonder Comics imprint, these theme are subsumed in favor of a different metaphor for the phone, namely that of the addictive nature of power when given and taken away by an external factor, of the power fantasy made manifest, and placed within the narrative of a different form of fantasy: that of running from home, of escaping the small town that threatens to crush the self and devour the soul.

And yet, in spite of these heavy themes, or, perhaps, because of them, “Dial H” is one of the most fun comics out there on the shelves at the moment and a true homage to all the forms the medium can take; it just wouldn’t be as fun without the heavy heart at the center of it all.

Issue #3 is where these two aspects meld the best thus far. We learn more about our co-lead, Summer, and the reasons why she keeps running away from Devil’s Canyon. This, in turn, feeds the H-dial’s transformation of her into Lo Lo Kick You, a Lobo-esque chaos character who has to fight within the “Shade the Changing Man/”Vertigo transformation of the world of Central City. And if that hasn’t sold you on the comic yet, have I mentioned just how well Joe Quinones channels each style of comics through his art? Because it is uncanny how he and colorist Jordan Gibson are able to mimic the graininess, layout, and visual appearance of all these varied styles and then merge them in a “Who Framed Roger Rabbit?” like mishmash, like a filter placed atop reality.

Dave Sharpe does a good job of mimicking the styles through his lettering as well, channeling the psychedelia of early Vertigo, although where it falls short is when attempting to mimic the hand lettering, where the digital fonts are noticeably modern. It doesn’t detract from the piece but it does provide that little bit of friction, which can work if read as the real world retaining its hold on these characters during their transformation or not, if read as the one piece not matching up to the rest. Otherwise, Sharpe’s lettering feels like a living piece of the comic rather than a passive one, morphing and breaking balloons when the force is needed, complimenting the intensity of the art without letting it drown or be drowned by it.

It’s also worth appreciating how Deyn illustrates and colors Summer’s past, contrasting the more rounded, bright sections of Miguel’s life. It’s a good use of a shift in narrative perspective and gives Quinones a break to draw the hell out of these other pages. Narratively, the plot does not move forward much this issue, with much of it spend on another fight mash-up between “hero” and “villain.” This isn’t much of a problem but, seeing as how this is a six issue mini-series, it does bring up the question: can “Dial H” afford to spend this issue delving into Summer’s psyche?

I say yes, as we knew very little about who she was prior to this. The comic is also a road trip, where the journey, and the connections made throughout, are more important than the destination. If Humphries didn’t have us slow down at the start to watch Miguel and Summer try to get The Flash’s attention by being the goofs they are, we wouldn’t have a better appreciation of their friendship or how they’re each handling the journey. Then, when danger strikes, it’s a change of pace, rather than the next in an endless series of fights.

It’s this constant willingness to shake things up that also keeps the comic interesting. Three issues of new heroes with a formula of, Dial H, splash-page intro, caption saying “find out their secret origin” and then secret origin, no matter how interesting they may be, can get tiring. Instead, issue #3 messes with that by cutting Lo Lo Kick You’s page in half and by introducing the Blue Bird of Happiness with only a faux-cover with the DC bullet logo. Summer’s backstory serves as a stand in for the secret origins and we actually learn a bit more about the mysterious Operator and Mister Thunderbolt.

It is clear that so much love and care for the medium has gone into this comic, embracing the wild possibilities of the conceit and all the imagination that comes bundled with it, expressing them with a post-modern flair. With a strong center in Miguel and Summer, and a clear grasp of what makes the H Dial a powerful weapon and its consequences, “Dial H for Hero” #3 is a comic that should not be missed and, hopefully, we will see more of it after the final issue.

Final Score: 8.9 – For the homages alone, this comic is worth the price of admission. Tack on the themes at play and the characters we follow, and the comic becomes better and better with each issue.

Rarely has a year so conveniently signaled the end of a cultural era as 1969, and it’s in this year that the revisionist events of “Rom: Dire Wraiths” are set. Fulfilling the promise of the late John F. Kennedy’s promise to put men on the moon by the end of the decade, the lunar landing […]

Pick of the Week: “Doctor Who: The Thirteenth Doctor: Year Two” #1

Writer Jody Houser is back with artist Roberta Ingranata for the second year of the 13th Doctor’s adventures at Titan Comics with “Doctor Who: The Thirteenth Doctor: Year Two” #1. This issue teams the protagonist with the 10th Doctor who just so happens to be one of the most celebrated heroes in the history of […]