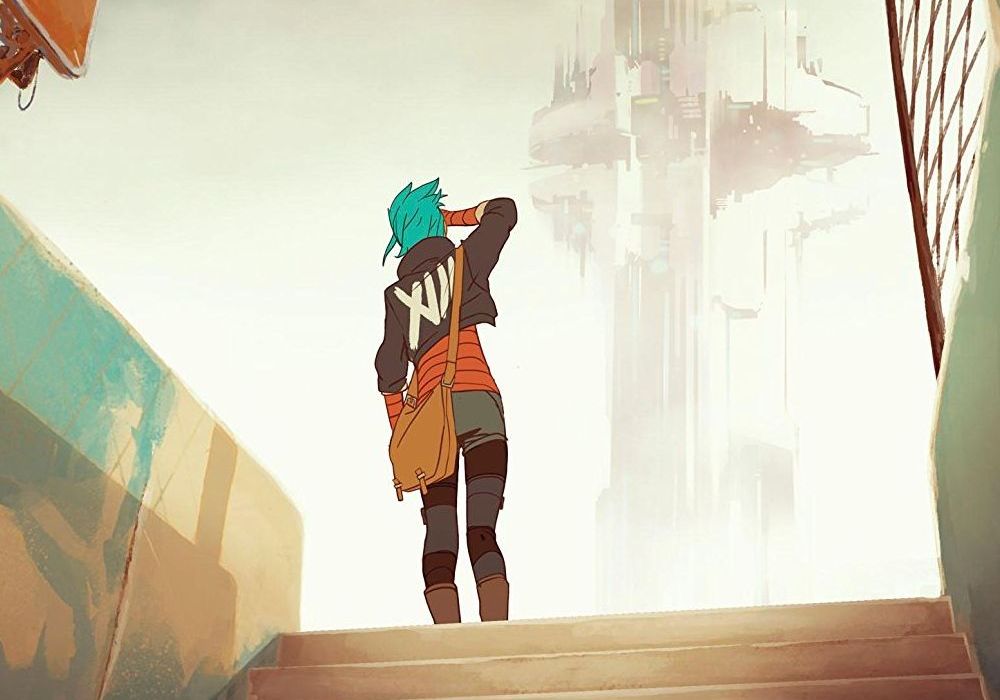 Vertigo’s new cyberpunk series “High Level” is the brainchild of longtime Nine Inch Nails art director Rob Sheridan, and its high concept premiere issue is full of ideas—some old, some new in the well-worn tradition of post-apocalyptic storytelling. In “High Level” #1 a new concept or character is seemingly introduced at each page turn, but does Sheridan’s eagerness to show off his world building details threaten to derail his story before it can get off the ground? 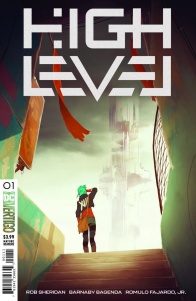 Hundreds of years after the world ended and human society was rebuilt from scratch, a self-interested smuggler is forced to traverse a new continent of danger and mystery to deliver a child messiah to High Level, a mythical city at the top of the world from which no one has ever returned. Don’t miss the start of a new series from writer Rob Sheridan, co-creator of Nine Inch Nails’ groundbreaking Year Zero alternate-reality game!

Cheekily billed as a post-post-apocalyptic story, Sheridan seems very interested in presenting a new civilization well past the stages of mere survival, choosing to focus on nascent but established societies, their organizing principles, their inhabitants, and in fact, their burgeoning cultural identities. With the first issue of “High Level,” readers are introduced to Onida, a kind of wild wild West but with indoor plumbing and home to denizens with a flair for brightly-colored fashion. After a head-scratching prologue, readers are immediately introduced to the heroine of the series, Thirteen, a stylishly-coiffed and sartorially neon sanitation worker who moonlights as a courier of sorts. Fine, she’s a smuggler. Frankly, it’s a bit unclear initially as her first delivery is obfuscated by some imprecise sequentials. In fact, it’s a recurring theme throughout this first issue that it seems at times to be more interested in piling on intricate details rather than making its narrative crystal clear.

It’s difficult to complain about an overabundance of detail when Barnaby Bagenda is at the artistic helm. Coupled with his art partner, Romulo Fajardo Jr., from DC’s underrated “The Omega Men” series, their artwork here foregoes post-apocalyptic grit for a more refined and electric presentation. Even the run-down environments have a marquee junkyard beauty. Generally speaking, the book is bold, lush, and awash with cool greens, blues, and purples. Even the warm end of the color spectrum seems infused with a dose of lavender. It’s a painterly style that favors shape over line, and the pages are particularly beautiful when, perhaps ironically, viewed at a high level. But as beautiful as Bagenda and Fajardo Jr.’s artwork is, at times it seems rudderless, as if they too are unsure where to direct readers’ eyes. The book is a kaleidoscopic cacophony of eye candy, and Bagenda and Fajardo Jr. seem to be throwing themselves into Sheridan’s gum ball machine of ideas with reckless abandon and giving a sheen to this lived-in world that the rookie comic book author is creating.

In this first issue, we are introduced to a mittful of supporting characters who have an undefined history with our protagonist. One in particular shows up late in the issue to save Thirteen’s hide, puts an end to the expository phase, and presumably kicks off the adventure that will drive the narrative for the rest of the series. Suffice it to say, Thirteen is being entrusted with “some very precious cargo” not long after being spooked at the sight of authorities at the beginning of the book and then being shanghaied by some cybernetic cult on what was supposed to be a simple pickup in the issue’s climactic pages. The only hint that we get that Thirteen can handle herself is that she can take out an overserved barfly. At this point, Thirteen’s suitability for the job doesn’t jive, and at a glance it looms as the book’s greatest narrative failing. Either that, or there’s some serious history between Thirteen and the issue’s savior that bespeaks a deep-seeded loyalty that overrides better judgment, or perhaps we just caught Thirteen on an off day. Better yet, Thirteen may come from a long tradition of the outsider who’s always getting herself into trouble, like shaggy dog private investigators who always seem to run afoul of a criminal plot that’s out of their depth.

In the post-apocalyptic loner tradition, the book even begins with some voice-over narration from Thirteen that will undeniably provide some thematic weight to the proceedings, something about the futility of needing rules for living, even to the point of risking death. Sunday school would not have been her thing. Sheridan does go out of his way in this first issue to portray Thirteen as a cynic and a skeptic whose life on the fringes is itself a kind of religion, and while there’s nothing particularly unlikeable about the lead character at this point, there’s nothing particularly likeable either, perhaps telegraphing a philosophical as well as physical journey on the horizon. On this point, Sheridan is to be commended. He’s painted Thirteen as a fallible and unlikely heroine, prone to drink and foolhardiness, and likely setting up a motivation for finding herself between many a rock and hard place for the issues to come. For all her broadly depicted shortcomings, Thirteen is definitely resourceful. She’s a freelancer with her own bargain basement Skeets at her side, a homemade cyclopic hover droid named Ezra that communicates in buzzes not unlike a certain R2 unit. The book’s narrative resonance will likely hinge on her finding something on which to believe, not unlike another certain “solo” smuggler.

For those who don’t mind a bit of an untidy or derivative narrative, “High Level” #1 has riches to offer, running through concepts at a dizzying rate, and Bagenda and Fajardo Jr. are up to the task of putting these concepts down on the page. After all, some of the greatest examples of post-apocalyptic stories are pretty thin on story. Blade Runner and the Mad Max films spring to mind. I’m sure you, dear reader, can name more. At a time when gaming properties are increasingly being adapted into comic book stories, “High Level” has the immersive feel of a dystopian video game environment, and reader’s enjoyment will likely hinge on whether the story can come close to matching this first issue’s swipe file inventiveness.

Final Verdict: 7.5 – For now, “High Level” gets relatively high marks for its beautiful artwork and willingness to throw ideas at readers. Whether the series has legs may depend on a more focused narrative thread, however. Luckily the final pages of this first issue provide that source of focus.